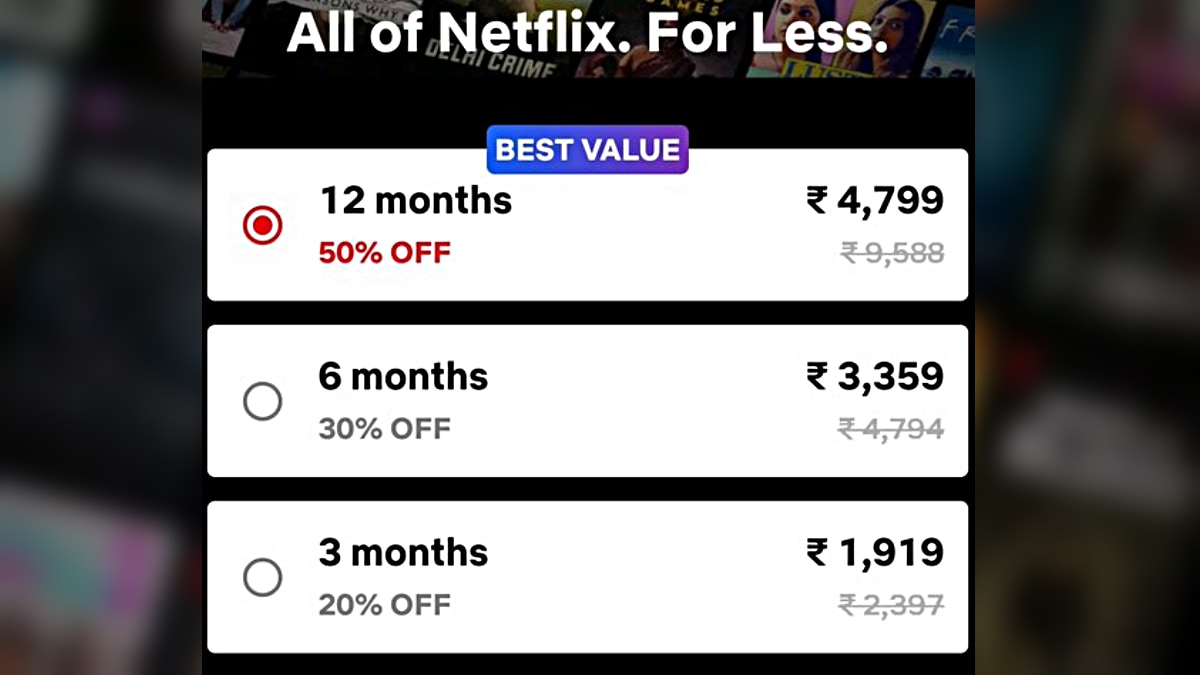 Netflix is testing long-term subscriptions plans in India, the company confirmed to Gadgets 360. The new tests, which are being done first in India, brings annual, six months, and three months subscription plans to the video streaming service and offers discounts of up to 50 percent when compared to the monthly plans. This means that subscribers opting for a long-term Netflix subscription will get a discount on what they would otherwise pay monthly to the service. The testing is currently limited to select users, though it is targeted at both mobile and Web users.

“We believe that our members may value the flexibility that comes from being able to pay for a few months at once. As always this is a test and we will only introduce it more broadly if people find it useful,” a Netflix spokesperson said in a statement emailed to Gadgets 360.

The new long-term subscription plans were spotted by a Twitter user in Udaipur. However, Netflix is conducting the pilot across the country for various new and returning users.

At an event in New Delhi last week, Netflix CEO Reed Hastings revealed that Netflix spending Rs. 3,000 crores this year and next to produce fresh local content in India.

“You'll start to see a lot of stuff hit the screen, big investment,” Hastings had said at the event while underlining how important India is for the company. “We're trying to invest in that becoming more Indian in the content offering.”

To recall, Netflix entered India back in January 2016 with three distinct plans -- Basic, Standard, and Premium. The company, however, over time expanded its range of plans to match the tastes and preferences of Indian audiences.

The most recent update that Netflix brought to its plan portfolio is the addition of the Rs. 199 plan that is exclusively designed for mobile users. The company also recently spotted testing ways to improve the video playback quality on the go by acquiring physical activity data of its users.

Netflix Says Mobile Plan Did Better Than Expected in India, Might Bring It to Other Markets

Unlike Netflix, competing video streaming platforms such as Amazon Prime Video, Hotstar, and ZEE5 have provided annual plans in India for quite some time. The new move, however, would give an edge to Netflix since it's not just testing annual plans but a range of long-term plans that would eventually give multiple options to subscribers.

Having said that, competitors such as Flipkart and Hotstar are making things difficult for Netflix by bringing free-to-watch content. Censorship of the listed movies and TV shows streamed through over-the-top (OTT) platforms is also a major ongoing concern for the video streaming service that considers India as a vital market to expand its growth records.