iPhone 6 Clones to Hit the Market Before Apple's Smartphone

Apple may not have confirmed the existence of its iPhone 6, expected in two screen-size variants (4.7-inch and 5.5-inch) later this year, however, this has not stopped GooPhone, the Chinese clone handset maker, to announce its own iPhone 6version even ahead of Apple.

GooPhone is famous for releasing very similar looking clones of flagship smartphones, and its clone handset portfolio already includes GooPhone M8 (clone of the HTC One (M8)), GooPhone S5 (clone of the Samsung Galaxy S5), and GooPhone i5S (knock-off of the iPhone 5s).

Gizchina reports that the popular clone handset maker has announced its next flagship, the GooPhone i6, which will go on sale starting August 1. As of now, GooPhone has only confirmed the launch of a 4.7-inch screen variant and the official site lists some of the specifications of the handset - 4.7-inch IPS qHD display; quad-core MediaTek (MT6582) processor; 1GB of RAM; 13-megapixel rear camera; 5-megapixel front camera; 1GB of RAM, and 8GB of ROM. The GooPhone i6 is quite evidently based on what's been seen so far in numerous iPhone 6 leaks.

In addition, another iPhone 6 clone, dubbed Wico i6, has surfaced online in two hands-on videos. The videos, posted by Jacky Zou, were first spotted by Nowhereelse, and show the handset that's based on the leaked designs of the anticipated iPhone 6.

The videos of the Wico i6 show a design that's has been widely expected based on earlier leaks for the alleged iPhone 6, with the handset featuring curved edges. Further, the video shows that the Wico i6' right panel houses the power button, instead on the top panel seen on current iPhone models, in-line with earlier leaks of the unannounced iPhone 6. Meanwhile, the left panel houses the slightly modified volume buttons expected to be seen in the next iPhone. 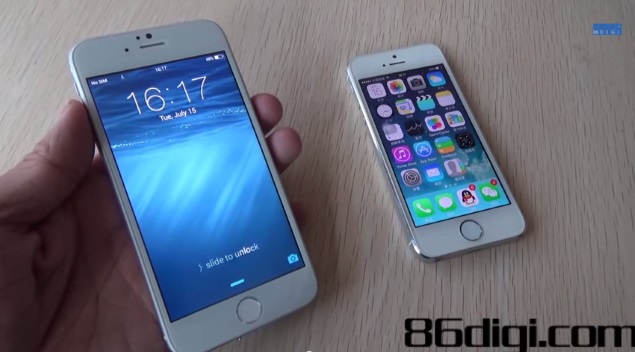 Last week, a report tipped that Apple might introduce a new haptic feedback technology in its next generation iPhone devices, while another leak suggested that the company had almost doubled orders for the iPhone 6 when compared to the iPhone 5.

Earlier this month, a report revealed a September 25 (Thursday) availability date for the alleged 4.7- and 5.5-inch iPhone 6 models, which is not in line with Apple's traditional Friday launch, while also claiming that the name of the larger 5.5-inch iPhone 6 variant will be iPhone Air.