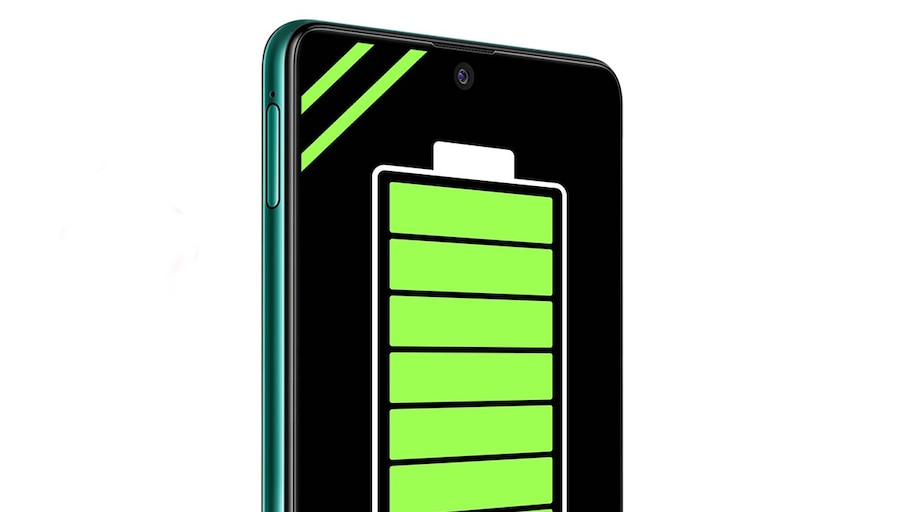 The Samsung Galaxy F22 has a massive 6,000mAh battery

If you're looking for a smartphone with exceptional battery life, then you've come to the right place. We currently have some very good options in the market, and the best part is you don't have to spend a fortune to get some of them. Samsung has been churning out some excellent marathon battery smartphones for the last several months and so has Realme. We've kept some phones which we feel are still relevant from our previous list, though many of our older recommendations have been replaced by new launches.

While battery technology itself hasn't really changed much over the years, we have been able to get better battery life from modern phones, partly thanks to hardware and software optimisations, and partly due to being able to cram in higher capacity batteries. Other technologies such as fast charging and wireless charging have also greatly eased the mundane task of keeping your phone alive.

Most smartphones these days easily last through a full day of moderate usage on a single charge, no matter your usage style. However, for this list we've rounded up smartphones that offer significantly more than a day's worth of battery life in our testing experience.

How we chose the smartphones

The list consists of phones that managed to run well above 20 hours in our HD video battery loop test. We also looked at battery capacity and the amount of runtime we got with regular use, based on our experience when we reviewed these phones. Other features such as quick charging and wireless charging weren't considered too much, since the purpose of this list was to simply have phones with the longest battery life. We also mainly looked at the recent offerings which are the most relevant in the market.

The Samsung Galaxy F22 is the company's latest smartphone featuring a massive battery at a very aggressive price. The 6,000mAh capacity helped this phone run for over 29 hours in our HD video loop test, which is one of the highest recorded runtimes we've had. With regular use, we had no trouble lasting more than two full days before having to charge this phone. There's a 15W charger in the box, but the Galaxy F22 can charge at up to 25W with Samsung's optional charger.

The Realme X7 Max effectively replaces the Realme X7 Pro, thanks to a more powerful SoC at a lower starting price. However, the reason it's on this list is that it also delivers exceptional battery life without being too bulky. It features a 4,500mAh battery which can be charged very quickly thanks to the 50W bundled charger. It also fared very well in our HD video loop test, running just shy of 23 hours. This phone also delivers great gaming performance, takes decent photos during the day, and has a bright display.

The Samsung Galaxy M32 is squarely aimed at users who want their phone to last more than a day, even with heavy use. Performance takes a bit of a backseat here, but in return, the 6,000mAh ensures you have plenty of juice to get you through up to two full days before you need to think of charging it. The bundled 15W charger isn't the quickest to fill up such a large battery, but the phone does support 25W fast charging if you care to buy a separate one. It also did very well in our HD video loop test, lasting for nearly 21 hours.

The Samsung Galaxy M42 5G is a relatively affordable 5G Samsung smartphone, but Samsung has had to cut a lot of corners to achieve this. It has an HD+ display which is ridiculous for a Rs. 22,000 smartphone. Thankfully, battery life is solid thanks to the 5,000mAh battery which can be charged rapidly at up to 25W (even though there's only a 15W bundled charger). The phone fared very well in our HD video loop test too, running for nearly 23 hours.

The Realme X7 5G is a mainstream 5G smartphone that boasts of an impressive feature set and equally impressive battery life. The capacity is just 4,310mAh which is a bit modest compared to many of the other phones on this list, but it still managed to run for a solid 20 hours and 45 minutes in our HD video loop test. Charging this battery doesn't take long either thanks to the included 65W fast charger.

The launch of the Samsung Galaxy F62 has pretty much killed the appeal of the Galaxy M51, which was previously on this list. For a bit more money, the Galaxy F62 offers a more powerful SoC and the latest version of OneUI compared to the Galaxy M51, along with many of the same other features which include a massive 7,000mAh battery. Needless to say, you can easily go two full days without having to charge this phone, even with heavy use. There's a 25W charger included in the box too.

The Realme C25 replaces the Realme C15, which was on our previous list. The new model features a more potent SoC, but more importantly, it retains the solid battery life that the C15 offered. With a 6,000mAh battery capacity, the Realme C15 has no trouble lasting for two full days on just one charge, and even longer at times. The phone has a USB Type-C port, unlike its predecessor, and an 18W charger is included in the box. It still takes over three hours to fully charge this battery though. The C25 did very well in our HD video loop test though, lasting for 27 hours.

The Realme 8 is kind of a mixed bag as it doesn't exactly offer the kind of upgrades we were expecting over the Realme 7, but it does pretty well in the battery department. It features a 5,000mAh battery that ran for an impressive 24 hours in our HD video loop test. 30W fast charging also ensures you don't have to wait too long to top up the battery.

Just like the Realme 8, the Realme 8 Pro is not exactly a clear-cut upgrade over the Realme 7 Pro but it does deliver good battery life, which is why it makes the list. Don't let the 4,500mAh capacity fool you – it lasted for a surprising 26 hours in our HD video loop test. The phone ships with a 50W charger in the box which can fully charge the battery to 100 percent in under an hour.

The Moto G10 Power is perfect for those looking for marathon battery life without having to spend much. At roughly Rs. 10,000, the G10 Power offers a massive 6,000mAh battery which easily lasts for up to two full days even with heavy use. The phone also ran for over 25 hours in our HD video loop test, which is a good sign. Charging the battery completely takes a while, but that's to be expected.

The Realme Narzo 20 is similar to Realme's C12 and C15 smartphones, but features a USB Type-C port and 18W fast charging. What helps it make the cut for this list is the massive 6,000mAh battery, which ran for a superb 29 hours in our HD video loop test. Charging the battery takes a while but it's not too bad thanks to the fast charging support.

The OnePlus 8 Pro is one of the few flagship smartphones that also manages to deliver exceptional battery life, and since it's still on sale, it deserves a spot on our list. It has a 4,510mAh battery and ran for 22 hours in our HD video loop test, which is impressive considering it runs on the powerful Qualcomm Snapdragon 865 SoC. Charging speed is relatively quick thanks to the bundled 30W charger.

The Realme X3 SuperZoom is still one of the most unique phones in its segment, and does very well in all areas. Despite packing in a flagship (albeit older) Snapdragon 855+ SoC, the phone's 4,200mAh battery still managed to run for a solid 21 hours and 42 minutes in our HD video loop test. You also get 30W fast charging to help charge the battery quickly.

Amazon's annual shopping extravaganza, Prime Day, is our focus this week on Orbital, the Gadgets 360 podcast. Orbital is available on Apple Podcasts, Google Podcasts, Spotify, Amazon Music and wherever you get your podcasts.