Apple CarPlay and Android Auto: What Are They and How Do They Work?

Apple CarPlay and Android Auto allow you to mirror your smartphone on your vehicle’s entertainment system.
By Ali Pardiwala | Updated: 26 November 2021 12:42 IST 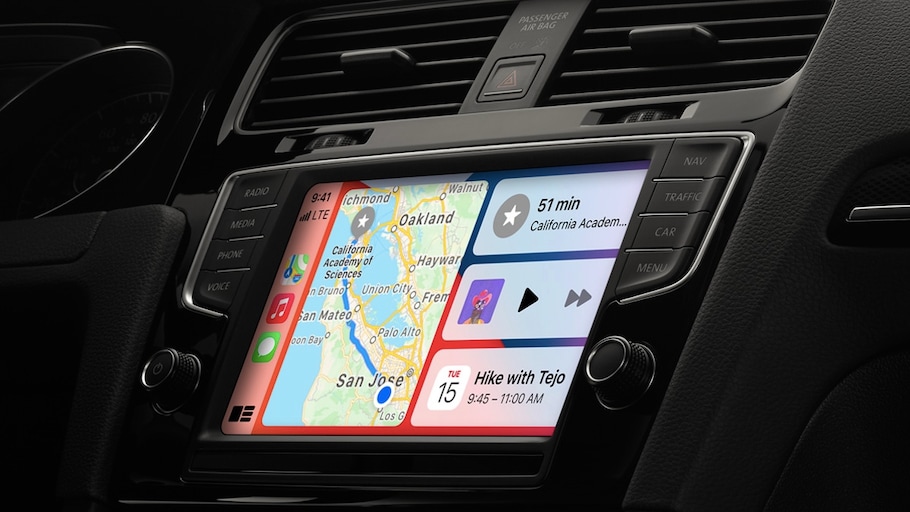 CarPlay and Auto work with compatible head units and systems

Both platforms work best with a wired connection

Google Maps is supported on both Android Auto and Apple CarPlay

Smartphones are considered the complete personal device for a number of reasons beyond the basics; your smartphone can help you with navigation, play music, communicate, and much more. Naturally, it's an invaluable tool to have when driving your car or riding your motorbike, and many people tend to have their smartphones mounted onto the dashboard or windscreen for access while driving. That's where Apple CarPlay and Android Auto come in, offering a safer, more seamless, and much more user-friendly solution for accessing content on your smartphone while you drive or ride.

As the names suggest, Apple CarPlay and Android Auto work with Apple iPhones and Android smartphones respectively. However, there is a lot more to these telematics platforms, and this article will help you understand exactly how they work, what the features and benefits are, and how it can help you while you're driving.

How do I use Apple CarPlay and Android Auto?

To start with, you'll need an in-car entertainment (ICE) system that supports Apple CarPlay and Android Auto. Many automobile manufacturers provide factory-fitted ICE systems that come with this compatibility even on smaller and more affordable vehicles, and most of them that support one platform, also supports the other. Interestingly, there are also some motorbikes that come with Apple CarPlay and Android Auto compatible entertainment systems too.

If your vehicle doesn't have one already fitted, you can also purchase an aftermarket system which supports CarPlay and Auto. Various brands such as Pioneer, Sony, Alpine, and Blaupunkt sell systems with these capabilities, so it's fairly easy to get onto the platform even if your car doesn't support them on its own.

If you have your compatible ICE system in place, getting started with Apple CarPlay and Android Auto is as simple as connecting your iPhone or Android smartphone to the ICE system using the right cable. Most vehicles and systems have USB Type-A input ports, so all you really need is a data cable for your smartphone.

Once connected, the ICE system should automatically detect the connected device and give you the option to bypass its own operating system and UI in favour of either Apple CarPlay or Android Auto. You can also set it to activate by default, so you don't need to choose to launch it every time, although this depends on the settings on the ICE system as well as on your smartphone.

How do Apple CarPlay and Android Auto work?

While Apple CarPlay and Android Auto are said to ‘mirror' your smartphone screen, the way these platforms actually work is very different from the traditional idea of screen mirroring. When you connect your iPhone or Android phone to a compatible ICE system, the screen on your system will show you a select few apps from your phone that you'd typically need while driving, such as music streaming services, navigation apps, and your phone dialler, in a layout that's easy to interact with. Indeed, you can still use many functions on your smartphone as you normally would while Apple CarPlay or Android Auto is active.

Various other apps may also be supported, such as messaging platforms, calendars, and news and podcast apps, to name a few. The apps that appear on your ICE system depend on the apps you have installed on your smartphone.

Once active, Apple CarPlay and Android Auto both display a home screen and app drawer, displaying those apps which are available for use on the platform, along with basic information such as mobile network strength and connectivity, the battery level of your smartphone, and the time and weather in your current location.

The app list will be considerably different from the apps on your phone; the idea is that you should only have access to those apps and services that are useful when driving, and other apps that might be a distraction such as games, video streaming apps, social media, and the like, are not accessible on the ICE system's screen. You'll have to stop your car and unplug your phone to access those.

Both platforms place a particular focus on navigation and music streaming apps, since these are the two most common smartphone functions that you would need while driving. Most key streaming services such as Apple Music, Spotify, YouTube Music, and Audible are supported on both Android Auto and Apple CarPlay, along with important navigation apps such as Apple Maps and Google Maps. Thankfully, you can use Google Maps even on Apple CarPlay, if you prefer it to Apple Maps.

Voice controls, safety, and other benefits of using Apple CarPlay and Android Auto

Apple CarPlay and Android Auto both put specific importance on the use of hands-free controls, using their respective voice assistants. Siri and Google Assistant enable users to control key functionality using voice commands, simply by tapping the microphone button and speaking. Integration with steering-mounted controls, if available, further makes this possible without having to take your hands off the wheel.

It's possible to use voice commands to control most functions on Apple CarPlay and Android Auto, including placing phone calls to specific contacts, playing selected audio tracks and playlists, or navigating to a location. The voice assistants can also read out incoming notifications - such as messages from WhatsApp - and even let you send a reply by a voice command.

Naturally, all of this makes using your smartphone - or a driving-friendly extension of your smartphone - a lot safer. The interfaces are designed to minimise distractions, and maximise your view of tools that can assist you to drive safely and quickly, including clear maps, responsive navigation, optional voice prompts for directions, and the ability to respond to messages and other notifications without taking your eyes off the road or hands off the wheel.

Both Apple CarPlay and Android Auto are available in factory-fitted ICE systems of various auto manufacturers, including vehicles available in India from brands such as Suzuki, Hyundai, Kia, Tata Motors, and Mahindra, to name a few. Availability in specific models also depends on the variant you buy and the ICE system it comes with; some vehicles may not offer Apple CarPlay and Android Auto support on lower variants.

A quick look online or in audio accessories stores will also show you a number of aftermarket options with support for Android Auto and Apple CarPlay. Apart from well-known brands such as Sony, Pioneer, and JVC, you'll also find many options from lesser known brands available to buy at various prices. Do note that installation of aftermarket accessories could involve opening up various panels and parts inside your car, which could void the warranty, so it might be worth looking more closely at factory-fitted options that support these platforms instead.

What's most interesting about Apple's new MacBook Pros, M1 Pro and M1 Max silicon, AirPods (3rd Generation), and Apple Music Voice plan? We discuss this on Orbital, the Gadgets 360 podcast. Orbital is available on Spotify, Gaana, JioSaavn, Google Podcasts, Apple Podcasts, Amazon Music and wherever you get your podcasts.