The Best Smartphones of 2021 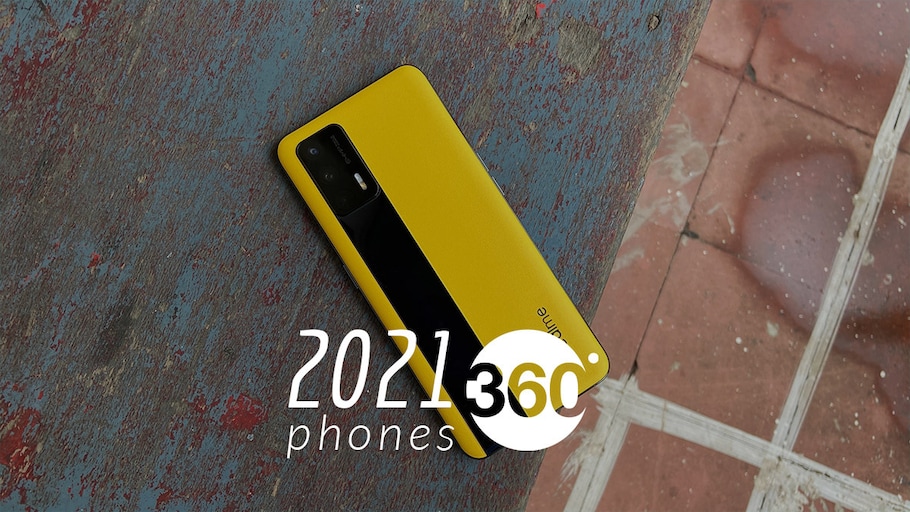 2021 has been a great year for smartphones, all things considered. We put out a list in the middle of this year recapping some of the best launches we've had in India, and now it's time for the final update as we close yet another year of stellar phone launches. Most of the phones in the previous list have remained, with the exception of some such as the Vivo X60 Pro, which has traded places with the Vivo X70 Pro+. We have some new additions such as the Realme GT and of course, the iPhone 13 series. The Google Pixel 6 series probably would have made this list too, had Google launched it in India.

How we picked the best phones of 2021

In the previous list, one of the criteria for a smartphone to qualify as one of the best of the year was that it had to have earned an overall rating of at least ‘8' in its review. However, we're tweaking that qualifier a bit for this list, which helps us narrow it down to only the best of the best. We've sorted all the phones that have earned an overall score of ‘9' for this final list, and then only picked the ones that we felt deserved a spot based on their sub-scores in different criteria. We also considered any unique features and performance advantages each smartphone offers compared to its peers in the same segment. Lastly, these models are the ones that we wouldn't hesitate to recommend to anyone.

With that out of the way, let's meet the chosen ones.

The Apple iPhone 13 and iPhone 13 mini aren't huge updates over their predecessors but we feel that Apple has made enough notable changes to keep things fresh and provide a better usage experience. Both new iPhones get some big improvements under the hood such as a faster SoC, sensor-shift stabilisation for the main camera, and larger batteries. They also get some of the same camera features as the iPhone 13 Pro models such as Cinematic Mode and Photographic Styles. All this adds up to a very good user experience, at the same starting prices as the iPhone 12 and iPhone 12 mini.

Just like the iPhone 13 siblings, the iPhone 13 Pro and iPhone 13 Pro Max look very similar to their predecessors from the outside, but there are a lot of changes on the inside which make them great. For starters, both Pro models get the long-awaited high-refresh-rate treatment for their displays, with the new screens being able to scale from 10Hz to 120Hz. There are new camera sensors and upgraded lenses which offer better stills and video performance compared to last year's models.

You can now shoot ProRes video with the iPhone 13 Pro models, and if you need more storage, Apple has brand new 1TB variants for each of them. Unlike the iPhone 12 Pro and 12 Pro Max, there isn't much of a difference between the new iPhone 13 Pro models, other than their display sizes and battery capacities. If you're planning on shooting a lot of video, the larger battery on the Pro Max should definitely come in handy.

It feels as though the Realme GT was designed specifically to take on Xiaomi's Mi 11X Pro, and the result, it is a value beast. Priced starting at roughly Rs. 38,000, the Realme GT offers flagship specs for a bargain. The 120Hz AMOLED display is superb, you get excellent performance thanks to the Qualcomm Snapdragon 888 SoC, and it also boasts of super-fast charging and a dependable set of cameras. An IP rating for water resistance is the only thing that's really missing, but apart from this, it's really hard to complain.

The Mi 11 Ultra has been notoriously difficult to get a hold of, which is a shame considering it's one of the best high-end smartphones to launch this year. Think of it as a bargain Samsung Galaxy S21 Ultra, but rather than simply being a knock-off, the Mi 11 Ultra actually one-ups the Galaxy S21 Ultra in many ways. Everything is top-of-the-line, from its build quality, display panel, cameras and battery to its excellent performance. All mandatory premium features are included, such as an IP68 rating and 8K video recording. Not only does this phone support wireless charging, but you can do so quickly at up to 67W.

Speaking of the Samsung Galaxy S21 Ultra, this in our opinion is still one of the best Android smartphones in the market today. It commands a very high price but if you can afford it, you get the best of everything in a single package, which makes it very hard to beat. Samsung has really upped its camera game with this generation, and the Galaxy S21 Ultra arguably has one of the best sets of cameras out there. The telephoto cameras especially are in a league of their own. Apart from being expensive, this phone is also heavy and bulky, and it tends to run hot when stressed, but other than these little chinks, there's really nothing else denting its tough feature set.

The Vivo X70 Pro+ adds two crucial features that were desperately missing from its predecessor, the X60 Pro+ — wireless charging and water resistance. These new additions coupled with an improved gimbal camera system and slick overall performance make this one of the best smartphones to launch in 2021. Telephoto camera performance is the only area in which we feel it could have done better, but everything else, including gaming performance, battery life, display quality, and the cameras are excellent.

Ever wanted a premium Samsung smartphone without having to pay the “flagship” tax? Well, the Galaxy S20 FE 5G could be just what the doctor ordered. This second-generation model is very similar to the original Galaxy S20 FE which launched last year, except that you get 5G thanks to the upgraded SoC. It has an IP68 rating, wireless charging, a telephoto camera, a 120Hz AMOLED display, a metal body, and very good battery life. All of this is backed by a very functional Android skin and the Samsung brand name, which at under Rs. 50,000, is very good value.

The Mi 11X Pro offers quite a few flagship features at a bargain-basement price. With prices starting at just under Rs. 40,000, you get a Qualcomm Snapdragon 888 5G SoC, a crisp 120Hz AMOLED screen, stereo speakers, and an IP53 rating for water resistance. We also found the cameras to be surprisingly good. Xiaomi's MIUI software is the only real party pooper here, with annoying promotional content in some stock apps. If you can look past this one flaw, the Mi 11X Pro offers tremendous value for money.

The OnePlus 9 Pro has jumped in price compared to its predecessors, but considering the improvements over last year's OnePlus 8 Pro, it is still an excellent smartphone. The new glossy design might not be to everyone's liking but it's well built and delivers excellent performance all around. Some of its new noteworthy features include 50W wireless charging and a class-leading ultra-wide camera. The display continues to impress, performance is excellent, the rest of the rear cameras are very competent in low light, and battery life is solid.

Will Snapdragon's new 2022 chips make it more prominent as a brand? We discuss this on Orbital, the Gadgets 360 podcast. Orbital is available on Spotify, Gaana, JioSaavn, Google Podcasts, Apple Podcasts, Amazon Music and wherever you get your podcasts.

Roydon Cerejo Email Roydon
Roydon Cerejo writes about smartphones and laptops for Gadgets 360, out of Mumbai. He is the Deputy Editor (Reviews) at Gadgets 360. He has frequently written about the smartphone and PC industry and also has an interest in photography. With over a decade of experience covering the consumer technology space, he is also an avid sci-fi movie and TV show geek and is always up for good horror flick. Roydon is available at roydon@gadgets360.com, so please send in your leads and tips. More
Advertisement