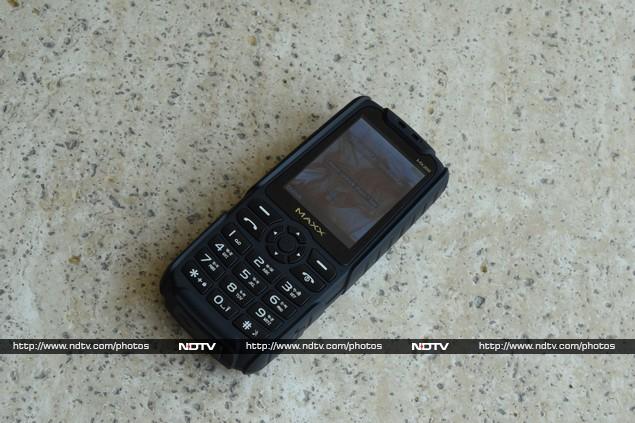 We've recently witnessed the launch of an Android phone that costs just Rs. 2,000 and it's quite likely that more will follow. Arguably, you lose much of the "smart" in smartphone when you pare things down so drastically, but it's still a step above cheap featurephones which are barely any different from what mainstream mobile phones were a decade ago.

Featurephones keep dropping in price and some manufacturers have tried faking the smartphone experience with touchscreens and popular apps. Today, though, we have a whole different animal with us for review. Maxx has decided to innovate by jamming a gigantic 5,200mAh battery into its new model, which is also accessible externally so you can charge other devices with it.

The appropriately named Power House MX200 ought to last weeks on a single charge - we're used to seeing battery capacities of anywhere between 1,800mAh and 4,000mAh on high-end smartphones, and that much juice has to suffice for power-hungry 3G and LTE radios, high-resolution screens and multi-core CPUs that run full tilt when apps demand it. With so much power to spare, you should be able to run this phone for weeks and still top up your other devices. Not a bad trick at all, in theory, but let's see how it works out in the real world. 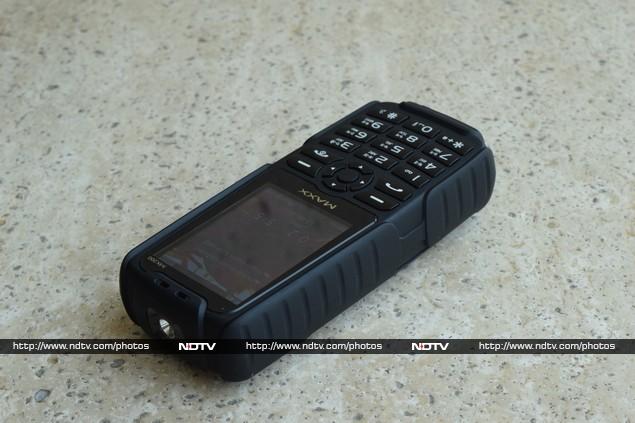 Look and feel
This is one huge phone. It's even bigger and heavier than the ancient Nokia 5110, one of the most popular models from 15 years ago when all phones looked like bricks. The MX200 will not fit comfortably in any pocket and, frankly, isn't even comfortable to hold or use - the only possible saving grace is that it isn't as wide as today's smartphones.

You might think by looking at the military-style casing that the Maxx Power House MX200 is designed to be rugged, or at least even slightly resistant to damage, but it isn't. This phone's housing is all show. It might have rubber flaps covering its ports, but these are not going to be effective against anything considering the entire rear cover itself pops off so easily. In fact, if not for its weight, this phone would feel quite flimsy and we can't really tell whether it would survive a drop or exposure to any liquid. Maxx's website and packaging materials make no mention of any kind of waterproofing, dustproofing, impact resistance or even a temperature range in which it can operate. 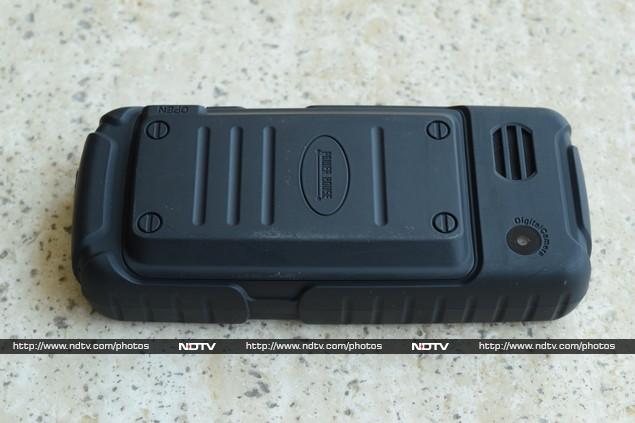 The keypad buttons are stiff and not very reassuring. There's a retractable FM antenna - why not - which is extremely likely to get bent. There are no dedicated volume buttons or any other conveniences that we take for granted today, except for an LED torch on the top.

A little flap on the right opens to reveal a full-sized USB host port into which you can plug other devices for charging. The MX200 comes with a retractable multi-pronged USB cable which you can carry instead of multiple dedicated cables. You get Micro-USB and Mini-USB, a 30-pin Apple dock connector, Samsung's old proprietary connector, and a cylindrical DC pin. 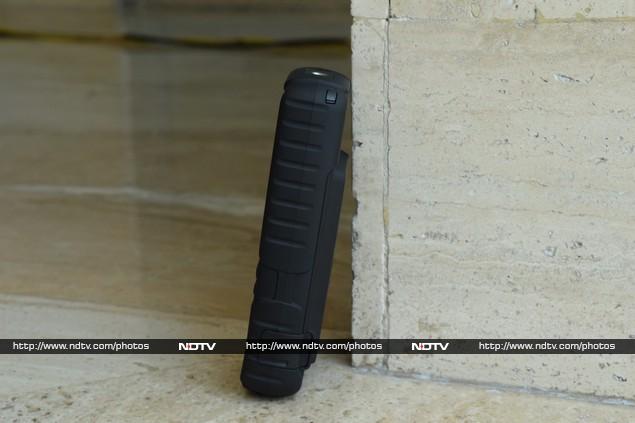 The rear cover comes off with surprisingly little effort, and you can then see the gigantic battery inside. It's completely self-contained and removable - on its own it looks to be around the size and shape of an asthma inhaler. The full-sized USB port is part of the battery itself, and there's an additional Micro-USB port on it to charge it. This means you can use it independently of the phone, which is actually pretty neat.

Beneath the battery, you'll find two full-sized SIM card slots and a microSD slot. Cards of up to 8GB are supported and you'll definitely want to buy one, because there's no internal storage space for files at all. 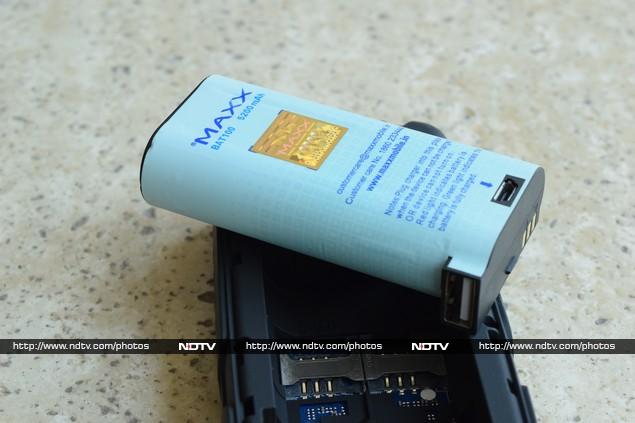 Features and software
The phone's processor is unnamed, but it really is of no consequence because there's nothing at all you could do with this phone that might require a decent one. The screen measures 2.4 inches diagonally and has a resolution of 240x320 pixels - a fair bit larger than the screens of candybar phones were when they were the norm, such as Nokia's tremendously popular Series 40 models. The MX200's screen can display 262,000 colours and about nine lines of text, so while basic graphics are okay, don't expect images to look realistic at all.

In another flashback to pre-smartphone days, you'll have to contend with limited storage pools for different data types. You can save only up to 500 phonebook entries and 50 text messages. If you want to take even a single photo you'll have to add a microSD card - capacities up to 8GB are supported.

There's no 3G or Wi-Fi so the best you can do in terms of data speed is GPRS. There is FM radio and a retractable antenna, so you don't have to have a headset plugged in. Bluetooth is also supported, but the version number is unclear. The 0.3-megapixel camera seems laughable in this day and age. 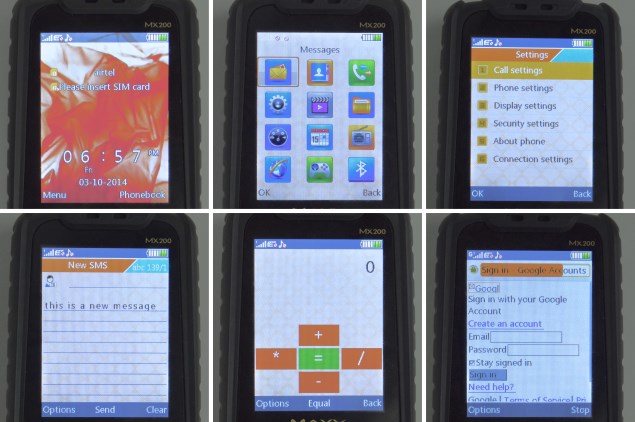 The MX200's software is entirely proprietary and there doesn't seem to be any ability to load or run additional apps. You get the standard messaging, phonebook and call log apps, along with a barebones calendar, calculator and world clock. The camera and video recorder apps are in a Multimedia folder along with individual apps for the voice recorder, audio player, image viewer and sound recorder. For some reason, an ebook reader app is in the Organizer folder. There's even a game - Sokoban - which is excruciating to play on this device.

You can set profiles (there's even a flight mode) and the only way to change ringer and other sound settings is to edit a profile. There's a Bluetooth menu which lets you detect, pair and transfer files to/from compatible devices. Finally, the Services menu contains links to Gmail, the Times of India, Facebook and Yahoo which open in a Web browser. The submenu item also labelled 'Services' launches the browser itself, and you can change the default Maxx homepage. You can find an option to type in your own URL in the menu. At GPRS speeds, we really didn't have much use for the browser, but we would still have liked to have been able to pin multiple Web shortcuts (especially since typing is such a chore). 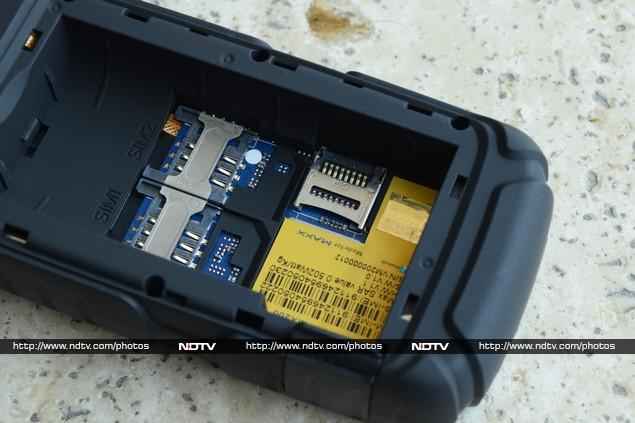 Performance
Since none of our benchmark tests would run on this phone, and its value lies in its unique battery rather than its performance, we tested it by using it as our primary mobile phone for a week. Other than the obvious lack of apps, Internet connectivity, notifications and other things we take for granted (and are also, in some senses, addicted to), we wanted to see how well the Power House MX200 works. We had mixed experiences - while the battery was quite impressive, the phone itself failed on many counts. 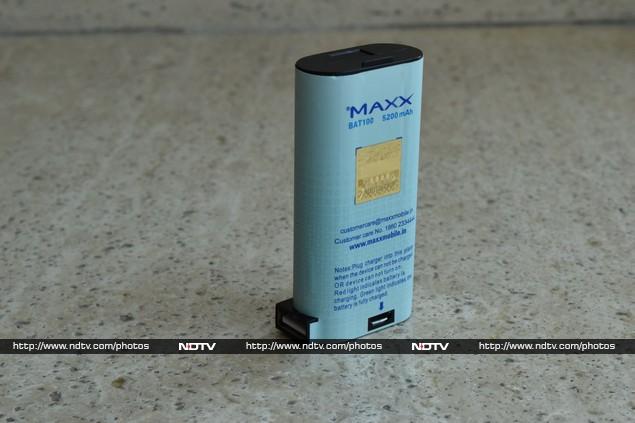 Call quality, which is important for a basic phone, was really substandard. We couldn't hear callers very well, and they consistently reported that our own voices sounded robotic or distorted. Comfort was another limiting factor - this phone was just too bulky and heavy to hold for long.

Text input is an exercise in masochism. Not only are the buttons stiff, but this phone lacks T9 predictive input so you have to manually press each button as many times as it takes to call up the letter you need - hello, 1995 - and the punctuation marks are so painful that we actually ended up typing like illiterate teenagers.

Multimedia functions are also best avoided - the speaker can get really loud but sound quality is not good at all. When using the FM radio or MP3 player, no controls are available unless you stay in the respective apps.

The camera, as expected, is a total joke. There was no situation in which we were able to take usable photos, and the less said about videos (320x240 QVGA), the better. 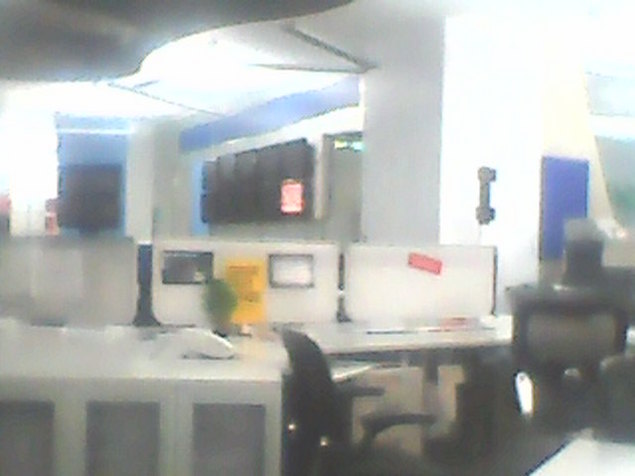 Many of these gripes might seem to be because we are smartphone users and thus not the target audience for a phone such as this, but honestly, these are some really basic things that phones were able to get right a decade ago and we really shouldn't have to deal with them today. Even on such a tight budget, there are featurephones that can do better.

All is not lost, however. The MX200 does offer dual-SIM functionality and has a microSD card slot, which are not so common at this price point. And then there's the battery. That glorious, gigantic, improbable battery. In nearly a week of usage (mostly only phone calls and a little bit of music), it did not die. We charged it up to full and were able to charge an iPhone 5c to 100 percent from its battery - and it still did not die.

The only problem we had with the battery is that you can't easily tell how far it has depleted at any point. The indicator seems to be poorly calibrated - we saw it jump around quite a bit. It has seven segments, but the phone seemed to spend most of its time with either only one or all lit up. If you come to rely on this battery, you'll really miss being able to gauge its charge level at a glance. 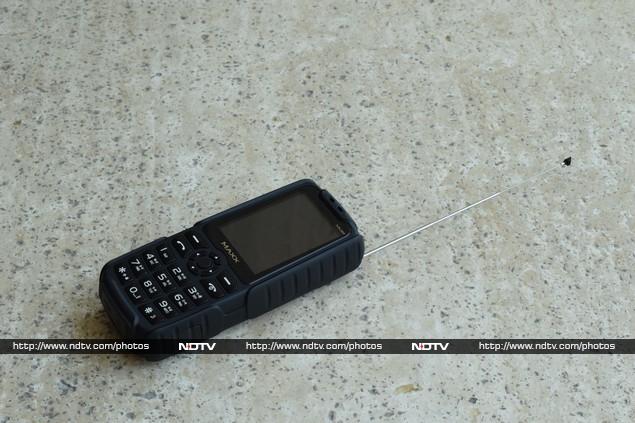 Verdict
We're pretty sure there are people who will appreciate the Maxx Power House MX200's low price and incredible battery life, and not care about looks or functionality. It could be a lifesaver for those who spend most of their time in places with erratic power supply (or none at all). That said, even though this product is clearly not aimed at a smartphone-buying audience, it could come in handy as a secondary phone. You could pop your SIM card into it when heading out on a hike or a camping trip so you can leave your more valuable smartphone at home - and then maybe even continue to use the battery pack long after you return.

Ultimately though, there are not many scenarios in which it wouldn't also be perfectly feasible (if not preferable) to carry a more conventional barebones phone and a separate portable charger. Even the Rs. 1,150 Nokia 105 would offer the same if not more functionality and be easier and more comfortable to use. Two separate devices would work out to be a little more expensive, but both would be useful for more things in more situations.

If you really are going to be in a situation in which it would be too difficult to plug your phone in to charge, or if you anticipate forgetting to do so, then the Maxx Power House MX200 will fit the bill. If not, you'd have to be irrationally in love with the idea of carrying a giant battery around everywhere in order to use it.