Fastest Electric Car Chargers Are Waiting for Batteries to Catch Up 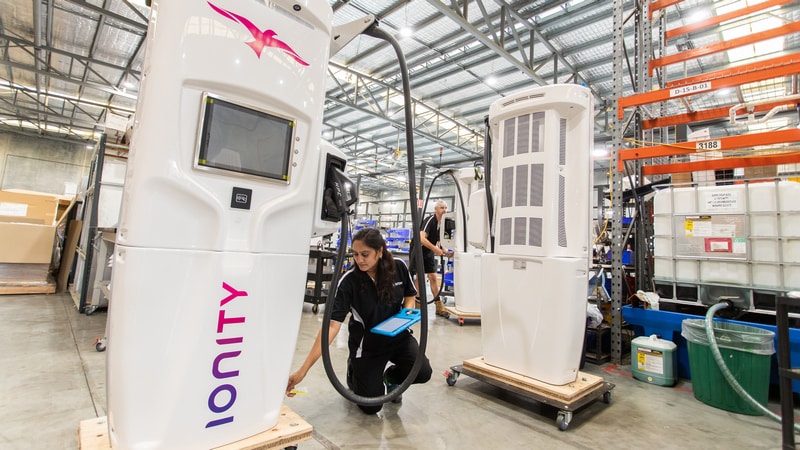 The viability of electric vehicles depends in part on a manufacturing plant in eastern Australia, where gleaming white cabinets the size of large refrigerators are loaded onto shipping crates. They're among the most advanced car chargers available, promising to deliver a full tank of juice in minutes.

Automakers and energy companies are spearheading the global rollout of these ultrafast charging pumps to lure consumers away from gas guzzlers and toward vehicles powered by electricity. Thousands of souped-up stations are being installed along highways from Shanghai to Germany and California, with the capacity to charge enough for 20 miles (32 kilometres) of driving range in one minute.

Electric vehicles will comprise more than half of all new car sales in 2040, according to BloombergNEF, as prices come down, while battery life and driving ranges get longer. To meet the power demand, about $50 billion (roughly Rs. 3,50,000 crores) of investment in charging equipment is needed through 2030, according to McKinsey & Co.

Volkswagen, Tesla, and Ford are among the automakers spending on high-speed chargers with eyes toward that future. Current power packs aren't compatible with the fastest chargers, and the first EVs able to fully utilise the new pumps won't debut until later this year.

"It's about impacting that buying decision in the dealership,'' said David Finn, CEO of Tritium, an Australian supplier of high-power chargers to more than 25 countries. "The main reason you own a car is for the freedom to do whatever you want, whenever you feel like it. That will always be playing on your mind if you have a slow charger.''

The push is seeding unheralded companies in atypical manufacturing hubs, including Tritium in Brisbane and Innogy's BTCPower, which has plants in California and the Philippines. It's also enticing traditional energy and engineering companies such as Zurich's ABB and Portugal's Efacec Power Solutions.

A typical, slow-speed public EV charger offers about 20 miles of driving distance per hour at the plug. The next level up, called a fast charger, can add about 75 miles in 30 minutes, according to Los Angeles-based station operator EVgo Services.

The ultrafast chargers blow those away.

Tritium, formed in 2001 by members of a solar-car racing team, makes pumps that add more than 215 miles of range in 10 minutes. Customers include Ionity - a consortium of carmakers, including Volkswagen and Ford, that's partnering with energy giants such as Royal Dutch Shell and Kuwait Petroleum International.

Ionity is building about 400 stations - with as many as six ultrafast chargers each - on European highways to compete with networks backed by Renault and Nissan. ABB, with chargers deployed in 70 countries, is also supplying high-speed pumps. It's "a real breakthrough in terms of convenience,'' CEO Ulrich Spiesshofer told the CERAWeek conference in Houston in March. "We barbecued a couple of cars until we got there.''

Electrify America, a Volkswagen unit created under a settlement in the automaker's emissions scandal, is spending $2 billion on refuelling stations in the US over a decade, installing its first ultrafast charger in Chicopee, Massachusetts, last May.

"The charging capacities of electric vehicles have doubled in the space of a few years,'' Wolfsburg, Germany-based Volkswagen said in an email. "We expect that fast-charging in public spaces will become the norm.''

Tesla, which has more than 12,000 chargers globally, is boosting the speed of its own refuelling units to cut time at the pump by as much as half. The upgrade promises to add as much as 75 miles of charge in five minutes - still lagging the ultrafast models.

The speed at which current EVs can recharge is limited by such factors as the size of their battery, the voltage the pack can accept and the charger's current.

While it may be years before battery packs able to handle the power surge from ultrafast chargers go mainstream, some new EVs - including Hyundai's Kona Electric and Jaguar Land Rover's I-Pace - already can recharge faster than previous generations.

Volkswagen's Porsche brand will introduce its electric Taycan sports car later this year. It's the first vehicle capable of taking full advantage of the fastest chargers, with a larger battery and the ability to operate at a higher voltage.

"The cars are coming," said Marty Andrews, CEO of Chargefox, which installed ABB's fastest units at some Australia charging stations. "The carmakers want ultrarapid chargers because they want this to be future-proof. This is not a six-month plan, it's a 10-year plan."

Battery-makers are starting to follow that lead. China's Contemporary Amperex Technology - better known as CATL - is working to improve charging speeds, according to its website.

By the end of 2018, there were more than 630,000 public charging points installed globally, the bulk of which were in China, according to BNEF. By 2030, there may be demand for more than 20 million public EV charging pumps, the International Energy Agency forecasts.

That's good news for manufacturers such as Tritium, which added a production line in California and a discreet facility in Amsterdam for automakers to test future electric models, CTO James Kennedy said.

"We are having to use air freight as customers just don't want to wait six to eight weeks,'' Kennedy said while inspecting completed high-speed units on the Brisbane assembly line. "They need them as fast as possible.''