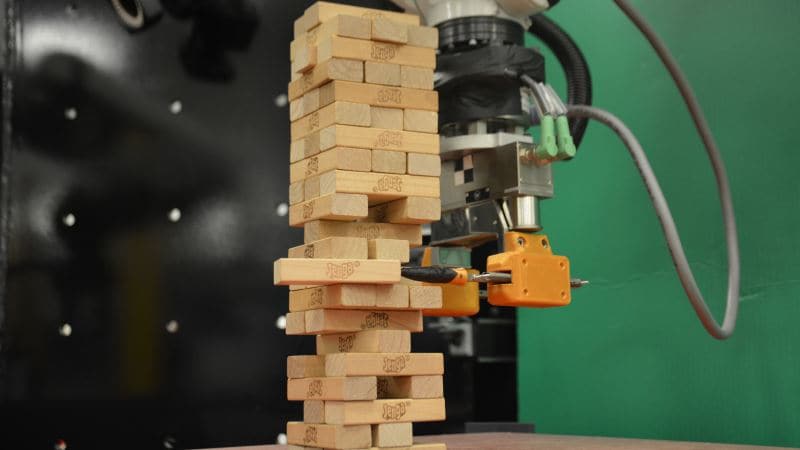 Photo Credit: Courtesy of the researchers

For several decades, various types of artificial intelligence have been facing off with people in highly competitive games and then quickly destroying their human competition.

AI long ago mastered chess, the Chinese board game Go and even the Rubik's cube, which it managed to solve in just 0.38 seconds.

Now machines have a new game that will allow them to humiliate humans: Jenga, the popular game - and source of melodramatic 1980s commercials - in which players strategically remove pieces from an increasingly unstable tower of 54 blocks, placing each one on top until the entire structure collapses.

A newly released video from MIT shows a robot developed by the school's engineers playing the game with surprising precision. The machine is quipped with a soft-pronged gripper, a force-sensing wrist cuff and an external camera, allowing the robot to perceive the tower's vulnerabilities the way a human might, according to Alberto Rodriguez, the Walter Henry Gale career development assistant professor in the Department of Mechanical Engineering at MIT.

"Unlike in more purely cognitive tasks or games such as chess or Go, playing the game of Jenga also requires mastery of physical skills such as probing, pushing, pulling, placing, and aligning pieces," Rodriguez said in a statement released by the school. "It requires interactive perception and manipulation, where you have to go and touch the tower to learn how and when to move blocks."

"This is very difficult to simulate, so the robot has to learn in the real world, by interacting with the real Jenga tower," he added.

The research was published Wednesday in the journal Science Robotics.

Researchers said the robot demonstrates that machines can learn how to perform certain tasks through tactile, physical interactions instead of relying more heavily on visual cues. That sensitivity is significant, researchers said, because it provides further proof that robots can be used to perform delicate or nimble tasks, such as separating recyclable objects from landfill trash and assembling consumer products.

"In a cellphone assembly line, in almost every single step, the feeling of a snap-fit, or a threaded screw, is coming from force and touch rather than vision," Rodriguez said. "Learning models for those actions is prime real estate for this kind of technology."

To become an adept Jenga player, the robot did not require as much practice as you might imagine. Hoping to avoid reconstructing a Jenga tower thousands of times, researchers developed a method that allowed the robot to be trained on about 300 games. Researchers said the robot has already begun facing off against humans, who remain superior players - for now.

"We saw how many blocks a human was able to extract before the tower fell, and the difference was not that much," study author Miquel Oller said.