But it teases an intriguing second sequel. Jumanji: The Next Level is out now in India and elsewhere. 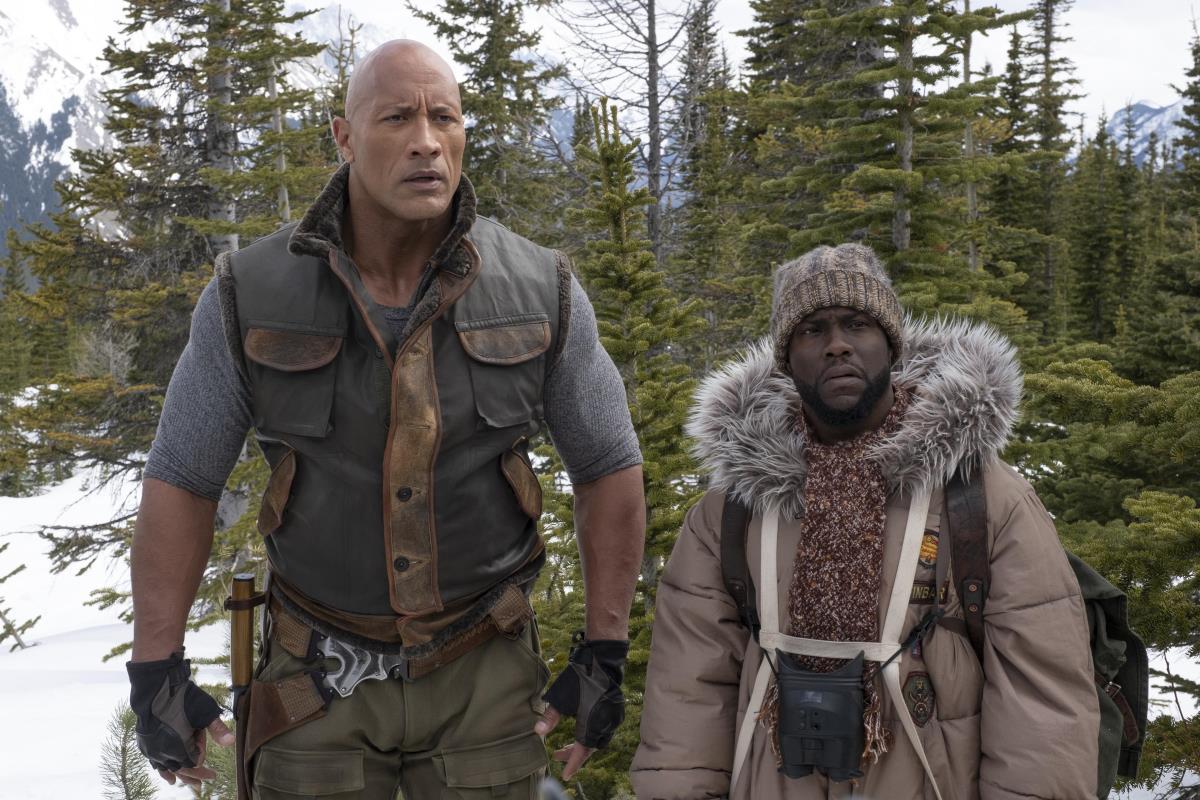 Dwayne Johnson and Kevin Hart in Jumanji: The Next Level

Jumanji: The Next Level. Release date: December 13, 2019. Director: Jake Kasdan. Cast: Dwayne Johnson, Jack Black, Kevin Hart, Karen Gillan, Nick Jonas, Alex Wolff, Morgan Turner, Ser'Darius Blain, Madison Iseman. Rating: U/A (India). Synopsis: “In Jumanji: The Next Level, the gang is back but the game has changed. As they return to Jumanji to rescue one of their own, they discover that nothing is as they expect. The players will have to brave parts unknown and unexplored, from the arid deserts to the snowy mountains, in order to escape the world's most dangerous game.”

Owing to the inherent dangers of Jumanji — originally as a board game, and in its new avatar, as a video game — its participants always vow, at the end of their respective adventures, that they will go near it again. In the original 1995 film, the central duo throw Jumanji into a river. In the 2017 spiritual sequel, the central quartet destroy Jumanji with a bowling ball. On a plot level, it's logical for the characters to behave in that manner. But the box office success of the franchise — especially the newer one — nearly demands a return to its world for Sony Pictures. Caught between narrative and commercial interests, the winner is obvious between the two. Welcome to Jumanji: The Next Level.

The sequel — from returning director Jake Kasdan, working off a script by Jeff Pinkner, Scott Rosenberg (Venom), and Kasdan — does the bare minimum in justifying the re-entry into Jumanji. It's self-aware to an extent, with one of the young adult protagonists snapping at another, “I can't believe you came back here on purpose,” but it's also very forgiving. And as a result, Jumanji: The Next Level ends being more of a rehash than a reinvention. And adding to its Indiana Jones riff — Kasdan is the son of Raiders of the Lost Ark writer Lawrence Kasdan, after all — the new Jumanji movie is also a mash-up of elements from Game of Thrones, Mission: Impossible, Lawrence of Arabia, and several video games.

Spoilers ahead for casting surprises and video game avatars, unless you've seen the trailer, in which case, go right ahead.

Jumanji: The Next Level opens with the four kids planning a Christmas reunion, having moved into college in the time after the previous film. Having not taken well to New York and his relationship with his intellectual equal Martha (Morgan Turner) on a break, the nerdy Spencer (Alex Wolff) finds himself craving the Jumanji high. It's revealed that Spencer recovered the broken game console, which he then attempts to fix. And after he doesn't show up to see his friends, the brawny Fridge (Ser'Darius Blain), the popular Bethany (Madison Iseman), and Martha go to his home, where they find Spencer's grandpa Eddie (Danny DeVito) and his former business partner Milo (Danny Glover) — but no Spencer.

They realise that Spencer has gone back into Jumanji and decide to jump in as well to help him. But due to the half-broken nature of Jumanji, they don't get to select their characters. And moreover, Eddie and Milo are pulled in as well. Those writing decisions allow the writers to push their protagonists into the avatars they want them to inhabit. The frail Eddie ends up as the strong, well-built Dr. Bravestone (Dwayne Johnson), the slow-talking Milo is now the zoologist “Mouse” Finbar (Kevin Hart), and Fridge becomes the over-weight cartographer Professor Shelly (Jack Black). Only Martha retains her role as the elite killer of men, Ruby Roundhouse (Karen Gillan).

Props to Jumanji: The Next Level for handing out new roles to most of its primary cast members — Johnson, Hart, and Black — who now have to channel a different young adult or one of the two new oldies. Gillan might have the same job, but she taps into Martha's anxiety and social cluelessness in a such a charming way, that she nearly steals the limelight altogether. Joining them is Awkwafina as a new avatar, who's a breath of fresh air, though she's not given enough to do ultimately. The sequel goes a step further and allows them to swap avatars inside Jumanji as well, which earns more laughs albeit from easy jokes, which sometimes land on the other side of the thin line that deals with race and gender. The unexpected switcheroos also miss out on pushing the queer themes of its predecessor.

Moreover, the new Jumanji movie feels better oiled when everyone is back in their original avatars because they just seem to get them. This feels like a weird sentence to type but Black channelling a teenage girl is somehow perfect. That said, a scene in the desert involving Black as Fridge, where he laments how Prof. Shelly is useless for an adventure video game — since his new weaknesses are heat, sun, and sand — produces some of the biggest laughs in Jumanji: The Next Level. But that's not the case for everyone. Johnson isn't simply a natural comedic star and doesn't have the range of a DeVito, who can do more in his limited time than Johnson does in the rest of the film, playing him.

The additional trouble is that Johnson's forgetful and hard-of-hearing act — as Spencer's grandpa — can only be stretched for so long. He's better off handling the emotional beats of the subplot, which involve an uneasy dynamic with Milo and their shared gripes about the perils of growing old. At the same time, Eddie and Milo's relationship also lays bare the thinness of the other characters and their relationships. All of Spencer, Martha, Fridge, and Bethany are essentially built on a single trait, and Jumanji: The Next Level's attempts to add to the bond between Bethany and Alex Vreeke (Colin Hanks) — the adult man whose avatar was played by Nick Jonas — virtually comes to nothing.

The film's villain — played by Rory McCann, Game of Thrones' Sandor “The Hound” Clegane — similarly suffers, though that's nothing new, given the treatment meted to Bobby Cannavale in the previous one. And the sequel's action set-pieces — usually involving a herd of animals, from ostriches to mandrills — are nothing to write home about, which is a shame considering they form the bulk of the runtime. For what it's worth, Jumanji: The Next Level brings a few additions to the mix that worked well to the tune of nearly a billion dollars last time around. And it helps that it doesn't ever take itself too seriously, while being fun enough in parts to carry you across a casual watch on the telly.

Essentially, Jumanji: The Next Level is far from necessary, but its (mid-credits scene) epilogue — which really should have been at the end of the previous chapter — suggests there's still some life left in this franchise, by pulling a Jurassic World: Fallen Kingdom and returning to the original form of Jumanji.

Available in English, Hindi, Tamil, and Telugu, Jumanji: The Next Level is out December 13 in India. Paid previews on December 12.

Jumanji: The Next Level