Jetpack Joyride India Official Is a Joyless, Half-Baked Game That's Nothing Like the Original 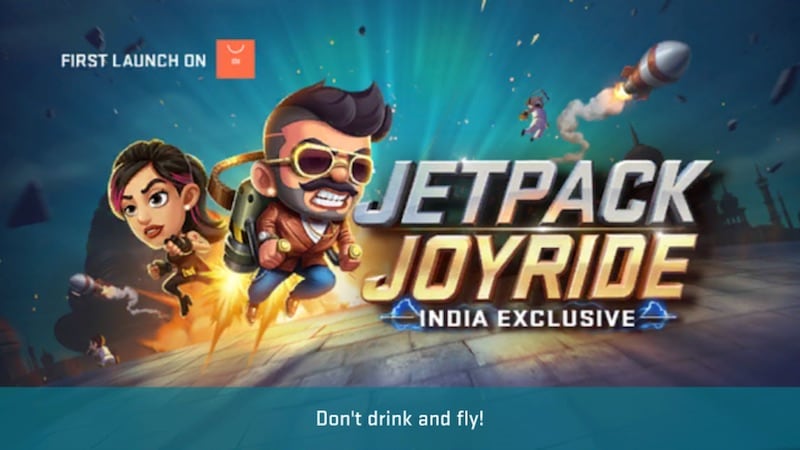 Jetpack Joyride India Official - the new and localised version of Jetpack Joyride that's exclusive to India - launched on Thursday and since I was obsessed with the original game, I immediately downloaded the new one, and over the next few days, have cleared all 100 levels to find out how it measures up to the original. Of course, people who are introduced to the franchise by the new title are not likely to make the comparison because the original has been removed from the App Store and Google Play, replaced entirely with Jetpack Joyride India Official.

Jetpack Joyride first released in 2011, and was one of the early success stories on the App Store. Its developer, Australia's Halfbrick, had released Fruit Ninja in 2010, and Jetpack Joyride helped cement its position as a leader in mobile gaming, but it's been having some troubles recently. The India edition of the game has been developed by Mech Mocha - a Bengaluru-based company that's backed by Flipkart, along with Blume Ventures, Accel Partners, and others - and it makes some pretty big changes to the game by way of localising the experience.

Jetpack Joyride India Official brings cosmetic changes. Barry Steakfries, Jetpack Joyride's long-running hero whom we actually first met in another (very enjoyable) Halfbrick game - Age of Zombies - gets replaced by Barrykanth. There's "culturalised marketing" as Mech Mocha partnered with "influencers", including Tanmay Bhat, Biswa Kalyan Rath, and Zakir Khan who play the different villains in the game, as pointed out by the company in a written note.

These elements are actually enjoyable for the most part. Crossing a security camera gets you 10 points and the message "Aadhaar linked" pops up, while one of the messages during level loading got a chuckle: "One time, Vijay Mallya took a loan from Barry, and paid it back on time." The levels also look fresh with a number of different backdrops, although it was pointed out by a colleague that the first set of levels takes "inspiration" from the popular Danganronpa character Monokuma. Having a lassi jetpack and an ISRO rocket are fun additions to Jetpack Joyride India Official, and the Singh is Bling costume is a favourite for me. Of course, I have no taste, since I also loved the Santa costume with the Christmas Tree jetpack from the original game. But the point is that in terms of the look and feel, India has been brought in while trying to stick to the quirky humour of the original.

There is a lot of India-specific humour.

But there is also a much bigger change - one of the most successful endless runners in mobile gaming has been turned into a series of very limited stages that completely fail to capture the spirit of the original game.

Jetpack Joyride India Official has 100 such levels, and they have different objectives, such as knocking over a certain number of chotus - the henchmen walking around at the bottom of the screen - or collecting a certain number of coins, or gems, or boxes, or surviving a certain distance. The original game also featured all these challenges, and provided rewards when completing them, but the key difference was that each run you made was truly endless, and so you could tackle the challenges in whatever manner appealed to you.

For instance, now if you have a challenge to knock down 30 chotus in 50 seconds, you're going to spend every second just knocking those guys down, while in the original game you were free to make a run that lasted over 4,000 meters so that you could pick them off one at a time while also gathering up some coins, or getting a distance record in. It's a formula that went on to influence an entire genre, and remains popular today, as seen in the Alto's games. To discard it, and instead switch to levels, which completely break the flow of the game, makes no sense - until you start to look at how the monetisation now works.

You see, Jetpack Joyride has long been supported by in-app purchases. You earn coins by playing the game, but you'd have to play for countless hours to earn enough coins to actually buy all the different costumes and jetpacks and gadgets that were available in the game. It took me almost a full year of obsessive play to get everything without paying, but the point is that it was quite possible to enjoy the game without paying.

And that's a problem when you're looking to maximise monetisation. Jetpack Joyride India Official comes with an energy meter, where you have 10 units of energy, and have to spend one for each attempt at a level. Boss levels require two units of energy, so lose a few levels and you'll burn through the energy quickly. There's also the fact that progress is gated by the number of stars you have - you earn these by completing levels, but the way this is scored is never explained clearly.

Unlike the original game, the Indian edition is broken up into levels.

There are some levels in Jetpack Joyride India Official where I've not been able to get more than two stars despite having perfect runs, and there are others where I barely scraped but still got three stars, so clearly the game needs to do a better job communicating with players. If you're repeating levels to earn stars, or dying and having to restart, then you'll run out of energy quickly, unless you're willing to spend money and buy more. You can also spend real money on coins - used to unlock cosmetic items - and gems, which are used to purchase consumable items that can affect your level attempt, such as a coin magnet, or extra time.

There is also a challenge mode, which does have a bit of the spirit of an endless runner to it, where you don't have levels and can compete to collect the most gems/ records/ other items, or to survive for the longest distance. Unlike the original game though, each attempt costs you and if you die, you can pay coins to continue the attempt to get on top of the leaderboard. And while this might just be unwarranted cynicism, it seems to be much harder to progress without paying in Jetpack Joyride India Official than it did in the original.

The focus on monetisation breaks the flow of the game badly, and doesn't let you simply enjoy taking your run further than before. You're always rushing to a goal rather than just enjoying yourself, and this is one of the ways in which the game is a far cry from the original. But there are also technical issues with the game. It stutters mid-level from time to time. This used to happen even with Jetpack Joyride back in the day, but that game didn't have an energy mechanic to limit how much you could play. But much worse is that it crashed twice after getting the top position on the multiplayer challenge.

After two such crashes, I've been relegated to top 20 in India, although the coins I spent on the runs before the crash are still gone from my account. Only my record-setting runs are missing. The game also freezes on load now and then. You'll see the map screen with the levels, but can't do anything, and the only way to start playing is to force close the app and start it again. These problems showed up on both a Xiaomi Mi Max 2, and a 2015 iPad Pro, so it's not just a question of the device we were testing Jetpack Joyride India Official on, or even the platform.

With the huge changes to the structure of the game - for the worse - and also issues with stability that make it hard to play the game, this version of Jetpack Joyride leaves a lot to be desired, and the fact that it's release meant removing the original from India is particularly galling. I'm just glad that I still have it on my PlayStation Vita. In an interview, Mech Mocha's CEO Arpita Kapoor says that "we [Mech Mocha and Halfbrick] worked together to create something that stands as a benchmark for how localisation should be done in India." If that's the case, we might be better off avoiding localisation altogether, and Halfbrick needs to answer how it allowed such a half-baked game to be released based on its IP.

You can purchase Energy, Coins, and Gems with real money.