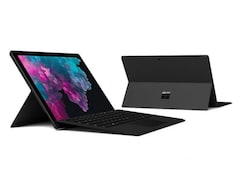 Microsoft Surface Pro 6 tablet was launched in October 2018. The tablet comes with a 12.30-inch touchscreen display offering a resolution of 2736x1824 pixels at a pixel density of 267 pixels per inch (ppi). It comes with 8GB of RAM.

Connectivity options on the Microsoft Surface Pro 6 include Wi-Fi 802.11 a/b/g/n/ac. Sensors on the tablet include ambient light sensor, gyroscope, and accelerometer.