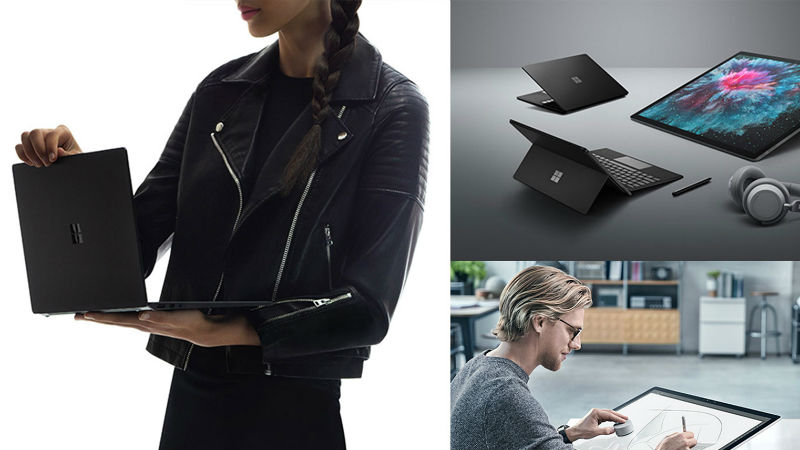 Microsoft updated its Surface PC lineup by launching three new devices at an event in New York this week. The Redmond, Washington-based company on Tuesday showcased the new Surface Pro 6, the Surface Laptop 2, and the Surface Studio 2. The refreshed lineup saw Microsoft add Intel's 8th generation Core processors and a new Black colour variant to the Surface Pro 6. Meanwhile, the company has updated the Surface Laptop with 8th generation Intel Core processors, more RAM, and a Matte Black finish. Additionally, the company has unveiled the second generation of the Surface Studio after almost two years and is claimed to be "fastest Surface ever." Needless to say, most of the new Surface devices does not come cheap. However, Microsoft has a Surface All Access subscription model to help users easily finance the purchases in monthly instalments.

The Surface Pro 6 comes with a 12.3-inch PixelSense Touch Display with 2736x1824 pixels resolution. There is an intelligent inking feature as wee. The Surface Pro 6 boasts of 8GB or 16GB RAM options and is equipped with 128GB, 256GB, 512GB, and 1TB SSD options. It also features Intel UHD Graphics 620 (i5) and Intel UHD Graphics 620 (i7) options. Connectivity options include Wi-Fi 802.11 a/b/g/n/ac and Bluetooth Wireless 4.1. It runs Windows 10 Home and Microsoft Office 365 (30-day trial). Additionally, users get "helpful time savers", including password-free Windows Hello sign-in and Windows Timeline. The battery promises to provide up to 13.5 hours of local video playback. In terms of dimensions, it measures 292x201X8.5mm.

Microsoft claims the Surface Studio 2 is the "most powerful Surface ever." It promises more "vibrancy, high graphics performance, and fast processing." The Surface Studio 2 is claimed to deliver with next-generation Pascal graphics and 50 percent faster GPU. Microsoft says that it is 38 percent brighter, with 22 percent more contrast. Additionally, the Surface Studio 2 and Surface Pen delivers 4,096 levels of pressure, tilt sensitivity for drawing and sketching, and "best-in-class" ink latency.

The Microsoft Surface Pro 6, Surface Laptop 2, and Surface Studio 2 are available for pre-order in select markets now. Notably, additional market availability is expected in 2019. Microsoft noted that the price of the Surface Pro 6 will start at $899 (roughly Rs. 65,900) for the variant with Intel Core i5 processor. The Surface Laptop 2, on the other hand, comes with a price tag of $999 (roughly Rs. 73,200) for the base 8GB RAM variant. The base model of Surface Studio 2 comes with an Intel Kaby Lake-based i7 processor paired with 16GB RAM, and the price starts at $3,499 (roughly Rs. 2,56,500).

Notably, Microsoft has announced Surface All Access to make it "easier to purchase and use the best of Microsoft across work and life." The Surface All Access offers the option of paying monthly for any Surface product, starting at $24.99 (roughly Rs. 1,800) per month for 24 months. It comes with an Office 365 subscription, access to in-store training and top-tier support. Surface All Access is available at Microsoft retail stores in the US, and buyers can start purchasing the new products starting October 16.