Redmi A1+ will be available in three colour options in India. 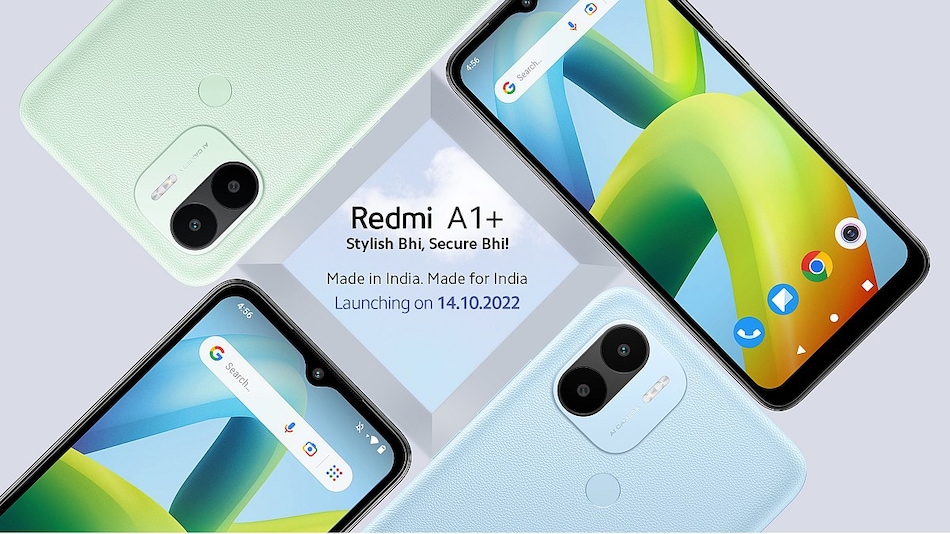 Redmi A1+ will launch in India on October 14, the company announced on Tuesday. The company's upcoming smartphone will be available in three colour options and will feature a leather texture finish on the rear panel. It will be backed by a 5,000mAh battery, feature a dual rear camera setup, and will run on Android 12 out-of-the-box. Redmi A1 was recently launched in India as an affordable smartphone with a “clean” version of Android 12, without the company's MIUI software skin.

On Tuesday, Xiaomi announced on Twitter that the Redmi A1+ will be launched in India on October 14. Last month, the company's Redmi A1 made its debut in the country equipped with an octa-core MediaTek Helio A22 SoC, an 8-megapixel dual rear camera setup, and a 5,000mAh battery.

Ahead of the launch of the Redmi A1+ in the country, Xiaomi has revealed some of the smartphone's specifications on a dedicated microsite. The Redmi A1+ will sport a display with a waterdrop-style notch.

According to the images of the smartphone shared by the company, the Redmi A1+ will be available in blue, green, and black colour options. However, the names of the colourways are yet to be revealed. It will feature a dual rear camera setup along with a flash. The smartphone will feature a leather texture finish on the rear panel, which also houses a fingerprint sensor.

Redmi A1+ is confirmed to run on “clean” Android 12, according to the company's microsite for the upcoming handset. The recently launched Redmi A1 handset also runs on Android 12, without the company's MIUI software skin running on top. The company also announced that the Redmi A1+ will be backed by a 5,000mAh battery.

The smartphone was previously spotted on the IMEI database with the model number 220733SFG. The company has not yet announced the specifications of the display and processor that will power the Redmi A1+ smartphone, ahead of its debut in the country.