It's Time to Go Green: Save the Planet and Money Too 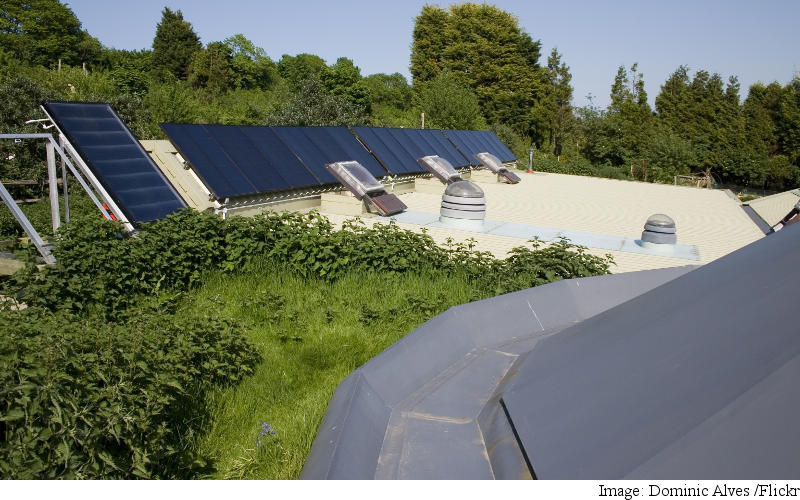 Bengaluru's world famous eyesore, Bellandur Lake became a headlining act on national and international media, as news reports highlighted how it had caught fire, with foam coming right into pedestrians faces. A change.org campaign demanding an immediate cleanup of the lake has collected over 31,000 signatures so far, while the local authorities have installed water sprinklers around areas where it tends to froth. Yet, the problem doesn't seem to be solvable until the city's citizens take accountability to treat their sewage. Actually improving the cities we live in would be a lot easier if we, as individuals, take some steps that don't just help the environment, but also actually save us a fair bit of money.

Nearly 650 million litres of untreated sewage is discharged into Bengaluru's vicinity every day, says S Vishwanath of the Bengaluru-based company Biome Environmental Solutions. The firm works on water sustainability solutions in government schools and drought affected areas. He points out that this problem has existed for fifteen years, and it's only after the foam started hitting the cars and two-wheelers in the city that people took notice. "It was frothing in Vishwavati Valley, where farmers had to deal with this froth since 2000. This is clearly a question of industrial consumption levels of detergents and fatty acids and other stuff which is going into the lakes," Vishwanath says.

Vishwanath's himself harvests water from the roof at the highest level of his home for cooking and drinking, while the water from lower roofs is used for landscaping and gardening. All the grey water (washing machine water and bath water) is funnelled through a series of filtration tanks, where grey water is stored, and plants, algae and bacteria break it down, removing phosphates and nitrates from the water. Guppies are put in so that mosquito larvae don't breed. 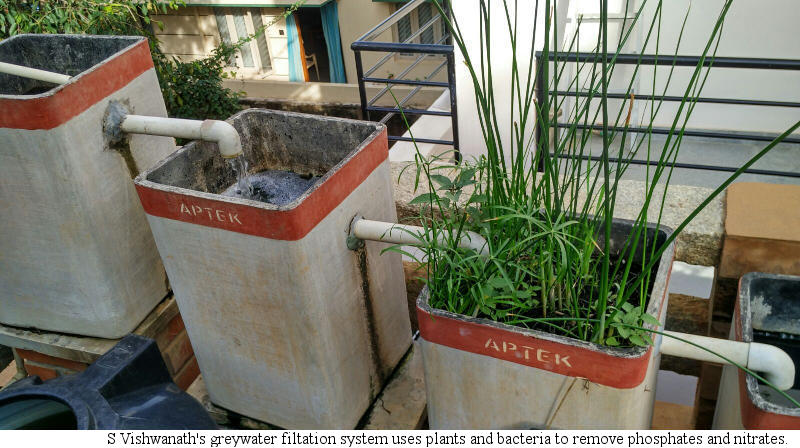 "The fish eat the larvae, and they are also functional indicators. If they start to die, then the water is not getting treated enough," Vishwanath explains. Eventually, the filtered water is used for in the garden and for flushing the loo below. In theory, this water can also recharge the groundwater. An eco-san toilet installed on the roof recycles urine as fertiliser for plants, while solids are composted in blue drums, so that no human waste goes out of the house.

It's possible to build an eco-friendly house, with features for rainwater harvesting, solar heating, and using environmentally friendly materials for construction, at around the same per-square foot cost as traditional building methods, experts say. Retrofitting can be a little more expensive, but over time, the saving from consuming less water and electricity won't just mean a cleaner environment, but also smaller monthly bills.

According to a report, 'green' construction can lower energy consumption by 30-50 percent, and lower water consumption by 30-70 percent. Short term planning is a particularly big culprit; a one-star rated gadget like an A/C or geyser might be significantly cheaper than a similar product with a higher energy efficiency rating, but the added electricity it consumes has a real cost, in terms of pollution and your finances over time. 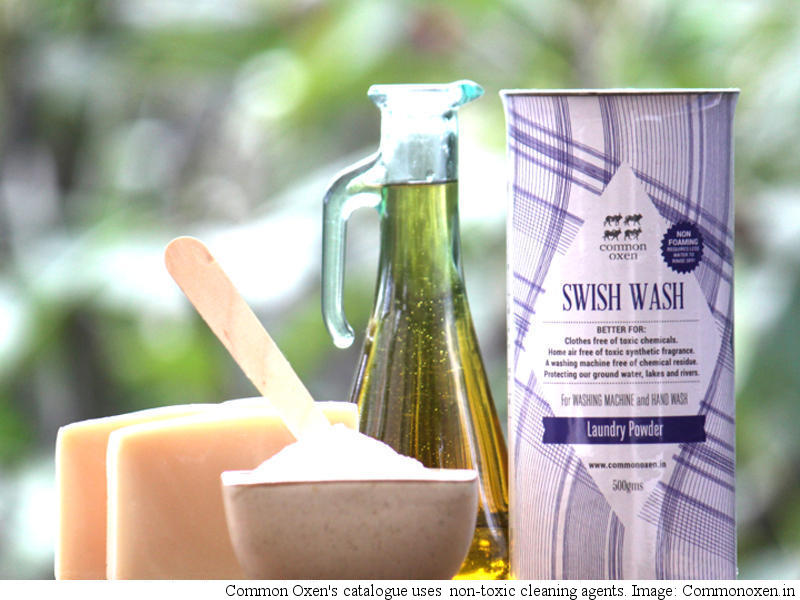 Waste management and chemical pollution are as big an issue as excess consumption. One of the main reasons for Bengaluru's frothing lakes seems to be our everyday detergent - which has foaming agents, surface active agents, and phosphate. Delara Damania, founder of Bengaluru-based Common Oxen which makes natural cleaning agents for the home, points out that even wastewater sludge goes into farms, and comes back into our food. "The fact that nobody is regulating this is just mind-boggling," she says.

Her startup is built around the problem of eliminating phosphates from household cleaning. "Phosphates on their own are not a bad thing, but they encourage the proliferation of water hyacinths, and other fast-growing weeds, that sort of suck out the oxygen and kill the other aquatic animals, and that's what spoils the water bodies," she says.

Vani Murthy, one of Bengaluru's most active waste management campaigners, is launching a mission to get one million people to compost their green waste at home. "It's a one week challenge, and is building up to a launch," she says. "If you could, on your part, take care of that half a kg of waste that you generate, than asking the municipality. That's one action that can have a direct impact on the future of the planet itself."

Composting is one action you can do for a better world, she says. "You are dealing with 60 percent of the waste right where it is being generated, converting it into something that is so important for the soil to grow your own food," Murthy adds. "The safest food is what you grow, because you know what you are putting in there."

Once you understand the process of aeration, the breakdown of food into micro-organisms, Composting can be a lifetime practice, a gateway to rooftop gardening. Murthy bartered her compost for seeds in her early days, and now she has three terrace gardens growing her own food. The organic terrace gardening group on Facebook has 27,000 members, and out of that, 6,000 to 7,000 are from Bengaluru, she says. They have quarterly events where people bring their produce called Oota from Your Thota.

For the first-time composter, she recommends doing it at zero expense, using an old bucket with some holes in it. "Start off with peels, egg shells, fruit peels. Dry leaves can be added to the compost mix, as it absorbs moisture from the peels and keeps the pile balanced. It does not let the wet waste get compacted," she says. A composting kit needs a bit of shade, and has to be protected from rain. Cow dung or sour butter milk can be used as a source of microorganisms.

"The basic rule is that it should be well aerated. If it doesn't breathe, it becomes anaerobic, and that's when it starts to stink. For aeration, it should not be packed in too compact - it takes a few tries to get the right balance," she says.

Reducing your energy footprint
If you're planning to build a green home or live in one, Teri's Griha Rating Booklet has a bunch of useful parameters to evaluate and rank housing projects by, with a points based rating system based on various criterion. These include factors such as materials used, environmental impact, energy use, water harvesting, low-power devices, 5-star rated electronics, amount of daylight used, surface reflectivity, and cooling.

Teri's rating system stresses on local sourcing of components - there are somethings that you lose points for - for example you can't use Italian marble, because it has a higher carbon footprint because of the transportation cost.

Some of the things to look into include insulated walls and roof construction, which can reduce you air conditioning bill in the summer and your heating costs in the winter. Smaller windows will also help - large windows look nice, but turn your home into a greenhouse, which isn't very suitable in India. You can also look into alternative energy, such as solar panels, and solar heating for water; rainwater harvesting can also make a big impact. 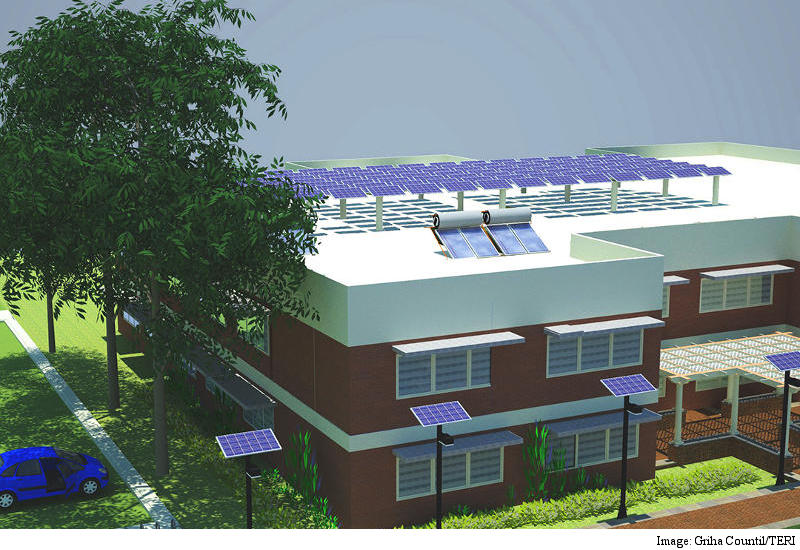 Materials like teak wood, and quarried stone that has to be transported from afar are a bad idea when you're building a new house. Fly ash bricks and locally sourced materials, design that promotes ventilation instead of air-conditioning, and planning for things like low-flow water and low-energy lighting all add up and make a big impact over time.

"Other houses that have been built in this area cost more than this one, and they don't even use green features. That is because they have used more expensive finishes, fittings, Italian marble," he says. "For us, it cost ten percent more per square foot to build this house. There are some savings you get directly in the capex itself, as you need less equipment, and so on."

Roy's house is made of two types of fly-ash bricks, which are easily available. Around 70-80 percent of the material was locally sourced. The supply chain for green materials has improved since he built his home, with Teri's website cataloging the suppliers. "Today, almost everything can be sourced locally, but electronics like controller systems, were imports," he adds.

"For a typical house, depending on where you are, the one thing to focus on is cooling the home passively, so that you need less active cooling," he explains. "Go increasingly on to LED lights, and you pick the low hanging fruits - the lights which are always on, and so on. Staircase lights can have motion sensors," he says, so they will not only be on when needed. "A solar power is a simple enough system to add on, can be paired with an inverter or used directly, a 1 KVA solar panel for around Rs. 1.5 lakhs is a very worthwhile thing to do," as this can help you reduce your dependence on the grid, and save significant amounts of money over time.

At the same time, low-flow fixtures reduce water waste, and your water bill as well, and rainwater harvesting can be good for the environment and will also reduce your dependence on expensive water tankers, when the municipal supply runs short.