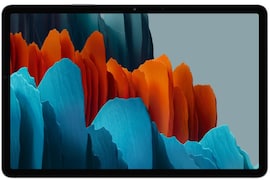 Samsung is among the very few manufacturers still pushing out high-end Android tablets, and the Galaxy Tab S7+ is its latest model. While most other manufacturers have been sticking to low-end tablets, Samsung has been showcasing what a top-tier Android tablet should be like. The Galaxy Tab S7+ has some impressive specifications such as a big 12.4-inch Super AMOLED display with a 120Hz refresh rate, a Qualcomm Snapdragon 865+ processor, and a bundled S-Pen stylus. Samsung has set the price at Rs. 79,999 which begs the question, is the Galaxy Tab S7+ worth such a huge investment? I put it through our tests to find out.

As far as the cameras are concerned, the Samsung Galaxy Tab S7+ LTE on the rear packs a 13-megapixel primary camera, and a 5-megapixel camera. It sports an 8-megapixel camera on the front for selfies.

Samsung Galaxy Tab A7
OR