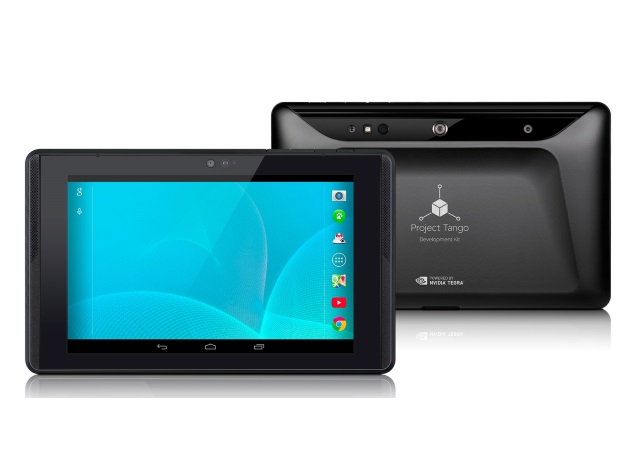 Google on Thursday revealed that is working on a tablet computer with 3D and motion-sensing capabilities in an effort dubbed Project Tango.
"The goal of Project Tango is to give mobile devices a human-scale understanding of space and motion," team member Johnny Lee said at a website devoted to the endeavour.
"Our team has been working with universities, research labs, and industrial partners spanning nine countries around the world to build on the last decade of research in robotics and computer vision, concentrating that technology into a unique mobile device."

The curtain on the project was pulled back as Google put out word it will soon put prototypes powered by Nvidia chips in the hands of developers interested in creating applications that take advantage of innovations built into devices.

The development kits can be used to make "apps" that track full 3D motion and recognize surfaces of things nearby, according to Google.

The company also detailed specifications and pricing of the prototype tablets for developers. Set to be released late next month, the Tango development kit will cost $1,024.

Featuring a 7-inch screen with a 1080x1920 pixel resolution, the Google Tango prototype runs on Android 4.4 KitKat, and is powered by an Nvidia Tegra K1 processor coupled with 4GB of RAM on board. Other specifications include 4G LTE, Wi-Fi and Bluetooth connectivity, and 128GB of built-in storage. For Project Tango's 3D computer vision tech, the tablet features two cameras along with a depth sensor.

The California-based technology titan pulled back the curtain on Project Tango a day after online commerce colossus Amazon put out word of a June 18 mystery event at which founder Jeff Bezos will launch something new.

Online speculation immediately centered on the potential for the Seattle-based firm to unveil a Kindle smartphone, perhaps with 3D graphics and motion-sensing capabilities.

Amazon invited people to request invitations at website amazon.com/launchevent and even teased the mysterious event in a video posted at YouTube.

The video, titled "Find out what these Amazon customers are talking about," featured people admiring something they were holding out of sight of the camera.

Comments included "it moved with me" and "it's very real life and uncomparable to anything I've ever seen."

For months, analysts have speculated about Amazon launching a smartphone that would be a companion to its Kindle tablets, which help keep consumers in the Amazon ecosystem.

Amazon is known for selling its tablets at low profit margins to compete with Google and Apple and to be able to sell digital content including e-books and films.

Edited by NDTV staff from original copy by AFP