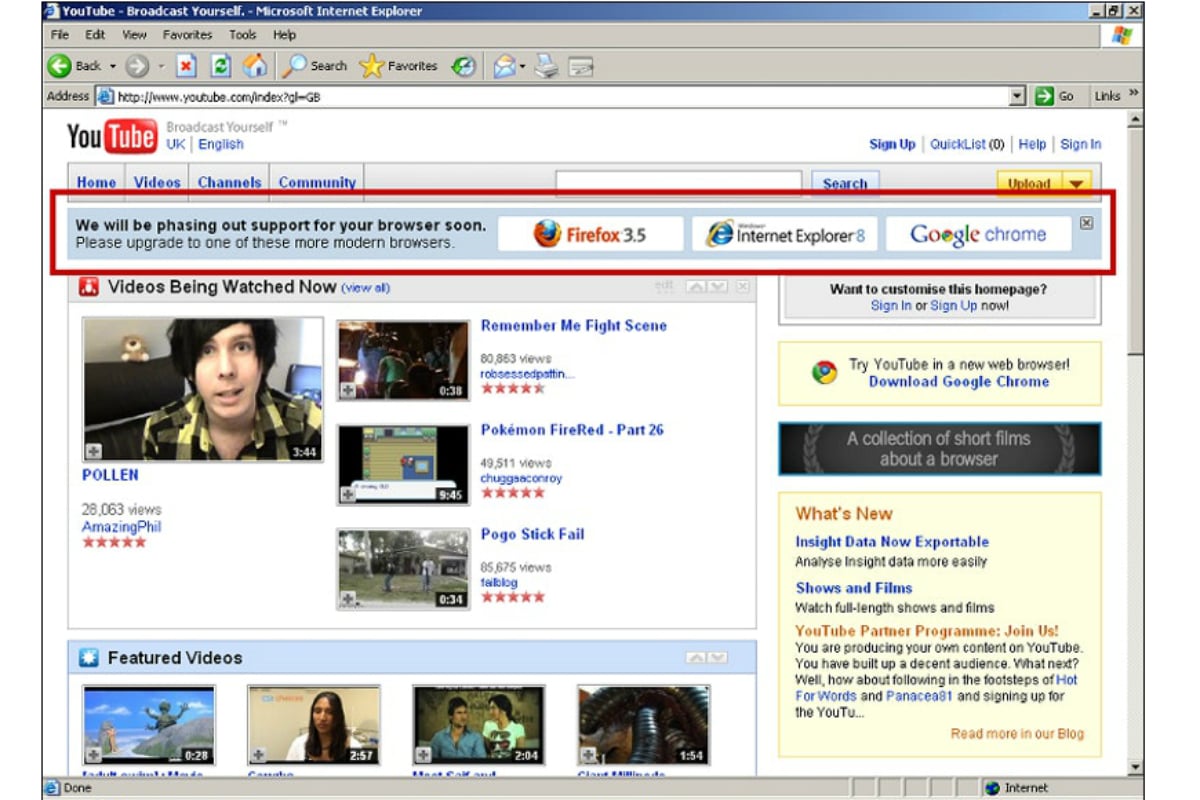 Internet Explorer 6, nicknamed IE6, is probably among the most used Web browsers in the personal computing world. While the Web browser had once enjoyed monopoly before Google Chrome and Mozilla Firefox made their mark, it also gained hatred over time -- thanks to various "problems" it encountered that resulted in random crashes. Now, a former YouTube developer has claimed through a blog post that there was a conspiracy to kill IE6. It was planned by none other than Google's video streaming service -- YouTube.

Former YouTube developer Chris Zacharias wrote that the Web development team at YouTube had planned the killing of IE6 over a lunch. The reason behind planning the assassination of the Web browser was simple -- the pain that developers had faced due to limited support.

"At least one to two weeks every major sprint cycle had to be dedicated to fixing new UI that was breaking in IE6," Zacharias recalls. "Despite this pain, we were told we had to continue supporting IE6 because our users might be unable to upgrade or might be working at companies that were locked in. IE6 users represented around 18 percent of our user base at that point."

According to the data provided by W3Counter, IE6 was dominating in the Web world until August 2008. But it was highly criticised for the bugs it had and crashes users faced. The most annoying behaviour that one recalls is the error that the browser showed saying it had encountered a problem and needs to close.

Similar to how the users were facing problems with IE6, Zacharias' post highlights that developers were equally impacted by the limited support provided by the browser maker. Thus, the young YouTube team that existed before Google's deal is claimed to have added a small banner that thanks to a bit of codeshowed up only to IE6 users when they would visit the YouTube site. The banner was warning users by saying, "We will be phasing out support for your browser soon. Please upgrade to one of these more modern browsers." Next to the text, there were links to the current versions of major browsers, including Chrome, Firefox, IE8, and Opera.

"We hoped that it was threatening enough to motivate end users to upgrade without forcing us to commit to any actual deprecation plan," writes Zacharias. "Users would have the ability to close out this warning if they wanted to ignore it or deal with it later. The code was designed to be as subtle as possible so that it would not catch the attention of anyone monitoring our checkins."

Alongside putting the banner, the team allegedly had decided to slip the code into production without letting anyone know about the update.

Developers generally require checks and balances to implement changes on a product like YouTube. But since the team in question was of "OldTubers", the people who were associated after the company was acquired by Google, they managed to push the change without any formal reviews. Zacharias pointed out that they were initially approached by the head of PR and a couple of lawyers. However, the folks had managed to trick their counterparts at Google.

Eventually, the YouTube engineering management did check for the decision, but by then, various other Google products, including Google Docs implemented the same banner that asked users to switch to browsers other than IE6.

"IE6 banners suddenly started appearing everywhere," the former developer states. "Within one month, our YouTube IE6 user base was cut in half and over 10 percent of global IE6 traffic had dropped off while all other browsers increased in corresponding amounts. The results were better than our web development team had ever intended."

The tale of IE6 departure is even exciting and interesting than how Microsoft was pushed by Google to start using Chromium open-source Web browser project for its Edge browser. Having said that, the end of the IE era has largely benefited Google Chrome and Mozilla Firefox.

As per the data provided by NetMarketShare, Chrome currently dominates the desktop Web browser space with 65.81 percent share, while Firefox comes second with a 9.63 percent share. IE, on the other hand, is found to have the third position with 9.52 percent of market share.