Here’s what happens to this popular character from The Book of Boba Fett. 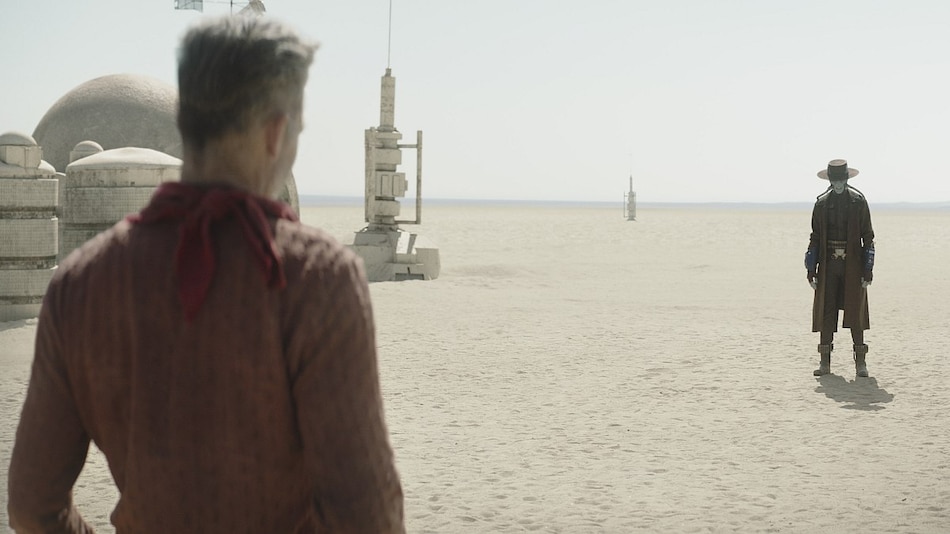 The Book of Boba Fett season finale is now available on Disney+ and Disney+ Hotstar, and fans around the world may have just finished watching the action-packed episode — perhaps the most lively one in the first season. In the final episode of the first (and hopefully only) season, Boba Fett (Temuera Morrison) and his newfound allies fought against the Pyke Syndicate to stop them from taking over the Tatooine city of Mos Espa. The post-credits scene brings a pleasant surprise for fans who saw the apparent, unexpected demise of a popular character earlier in the season.

Warning: Spoilers ahead for The Book of Boba Fett

In the season finale of The Book of Boba Fett, fan-favourite Cobb Vanth (Timothy Olyphant) was nowhere to be found in the battle against the Pykes that takes place. That made sense. In the penultimate episode that aired last week, the Mandalorian Din Djarin (Pedro Pascal) sought out Vanth, the Mos Pelgo Freetown Marshal, to ask for help against the Pyke Syndicate. Soon after, Vanth faced off against Cad Bane (Corey Burton), who featured in The Clone Wars. Bane was able to get a jump on Vanth in a gunslinger's duel, after the latter's deputy distracted him. While Vanth was previously believed to have been killed, the post-credits scene on The Book of Boba Fett season finale suggests otherwise.

At the end of the season finale episode that aired Wednesday, viewers see the celebration scenes after the battle for Mos Espa, with Boba Fett's arm apparently injured during the fighting. While he has been using his Bacta tank to heal himself throughout the season, Fett reveals that he cannot do so as it is already in use by someone else. After the pictorial credits roll, the post-credits scene shows Cobb Vanth in the Bacta tank, suggesting that the citizens of Freetown may yet have hope that their Marshal could make a return.

From the post credits scene, it appears that Fett has tasked the Mod Artist (Stephen “Thundercat” Bruner) cybernetically enhance Vanth so he can survive. Just as Fett did in the flashback scene earlier this season when he rescued master assassin Fennec Shand (Ming-Na Wen) by taking her to the Mod Artist. While the post-credits scene leaves many questions unanswered, including Vanth's future in the series, it suggests that his character may have a bigger role to play in The Mandalorian season 3. Or maybe elsewhere in the ever-expanding Star Wars (TV) cinematic universe.

All the episodes of The Book of Boba Fett season 1 are available to stream on Disney+ Hotstar. No word on a season 2 announcement yet.

The Book of Boba Fett