Netflix’s Army of the Dead is a failed genre homecoming for Snyder after 17 years. 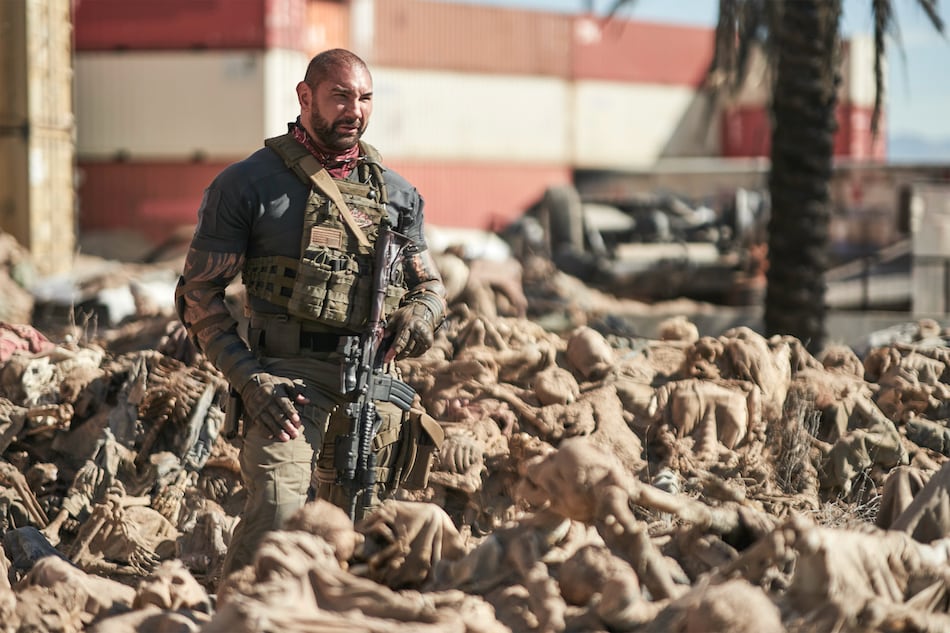 Dave Bautista as Scott Ward in Army of the Dead

Army of the Dead, Zack Snyder's new zombie heist thriller — out Friday, May 21 on Netflix — fails to deliver on every aspect of that description, except that it's unmistakably a Snyder film. Army of the Dead runs for about 138 minutes minus the credits (that's a lot), with Snyder once again showing that he's unable to trim his films down to size, on the back of a four-hour Justice League in March. Army of the Dead earns its 18+ rating with copious amounts of blood, gore and human entrails — Snyder loves a hard-R rating — but it's all gratuitous, and the movie is empty outside of it. And though there's neon oozing out of its posters, Army of the Dead is drab, dull and devoid of any fun. It's a Snyder trademark at this point, but it's still disappointing to see that he has no interest in changing his voice or visual style.

But Snyder keeps getting money to make his movies. Army of the Dead almost didn't get made though. Originally set up in 2007 at Snyder's long-term home Warner Bros. — everything he has made since 2006's overly-stylised epic action film 300 had been there — Army of the Dead fell through into development hell as the studio passed on the idea, much like it has with Snyder's DC universe project. Netflix, ever hungrier for buzzy names and new worlds, lapped it up in early 2019. A franchise is already brewing, with a prequel film Army of Thieves directed and led by Matthias Schweighöfer, and prequel anime series Army of the Dead: Lost Vegas, which will also see Snyder direct some episodes.

And naturally, Army of the Dead leaves room for a sequel as well. But will anyone be calling for it? There's no relatability to any of the film's characters, most just get a two-line description that affords them little connection to the audience. More importantly, the film's core, a father-daughter relationship, is devoid of any real emotional impact. Snyder lost his own daughter a few years ago, so this is very personal for him — Army of the Dead in fact marks his return to movies after stepping away from Justice League due to that family tragedy — but he's unable to translate that pain and loss into something real and with depth here. And the Army of the Dead plot too is nothing special, functioning largely as a video game mission set in a post-apocalyptic Western wasteland.

Watch the Army of the Dead Trailer in Hindi

After establishing the origins of a zombie-infested Las Vegas that has now been quarantined off, Army of the Dead introduces its ensemble cast, most of whom have military ties. The principal character is Scott Ward (Dave Bautista), who once rescued the US Secretary of Defense from zombies in Vegas but is now flipping burgers. He has an estranged daughter in Kate Ward (Ella Purnell) who volunteers at a refugee facility outside of Vegas. Among the refugees is a single mother of two Geeta (Huma Qureshi) who needs money to build a new life for her family. Then there's Maria Cruz (Ana de la Reguera), a mechanic who has a soft spot for the widower Scott. They have a mutual best friend in Vanderohe (Omari Hardwick) who is working at an elderly care facility.

Scott, Maria and Vanderohe are reunited after Bly Tanaka (Hiroyuki Sanada), the billionaire owner of a (former) Vegas casino, approaches Scott with an offer: if they get to his casino's basement vault and steal the $200 million within, they get to keep $50 million. Scott further builds out the team by hiring a safecracker in Ludwig Dieter (Schweighöfer), a helicopter pilot in Marianne Peters (Tig Notaro), and a sharp-shooter social media influencer in Mikey Guzman (Raúl Castillo). Tanaka attaches his security chief and right-hand man Martin (Garret Dillahunt) to keep an eye on them. The team further takes on more weight in Lilly “The Coyote” (Nora Arnezeder) who knows her way into Las Vegas. There's a lot of moving parts to this operation and you know it's not going to go well.

It's also The Coyote who introduces Scott and the crew to a much-changed Las Vegas. There are two types of zombies now, she explains. There are the standard shamblers who are incapable of thought, and then there are alpha zombies who are capable of taking orders. As such, there's an Alpha Queen (Athena Perample) and an Alpha King called Zeus (Richard Cetrone) among them. But Snyder is hardly done. Army of the Dead also features hibernating zombies who wake up if you push them or shine a light in their faces. And on top of that, we have zombie animals. A zombie tiger called Valentine appears multiple times, including in a scene that is essentially dedicated to it. There is also a zombie horse on Army of the Dead although it's largely ignored.

From Army of the Dead to Lucifer, What to Watch in May

But for all the innovation in types of zombies, it's frustrating how little they matter. When we first see the Alpha Zombies, Army of the Dead suggests a sense of community — and maybe even the idea of progeny. But those elements aren't part of some grand commentary that Snyder is attempting. All of this merely exists so that the humans have to face an army of the dead at the end. The depth of messaging here is on par with its jabs at Donald Trump. Though he's never shown, he's still the US President in this timeline given the statements we hear and a controversial cameo for former press secretary Sean Spicer.

The closest Army of the Dead comes to any kind of meaningful commentary is in regard to the capitalistic nature of our world. The aforementioned $50 million reward isn't being split evenly among the team. Scott, Maria and Vanderohe are planning to keep $15 million each, but the rest of them don't know that. The pilot is promised a couple of million, the influencer gets half a million, and the safe cracker — ostensibly the most important among them all, as a character even notes — is only getting a quarter million. It's weird how everyone still internally justifies that the risk is worth what they might get. And this fits within the larger Las Vegas picture. Sin City has always been about money (and in turn, gambling which here is gambling with your life), and Snyder understands that much.

Of course, the entire harebrained scheme is some sort of dishonourable Rogue One essentially, but the principals think they are owed something for their heroics during the early stages of Las Vegas' zombification. Still, it's odd how the mission's liabilities grow. Though what's odder are the film's turn of events. At first, The Coyote says they must abide by the rules and regulations of the Alpha Zombies, if they wish to seek safe passage. That involves staying indoors, which seems like poor writing to contain CGI budget costs and force characters into enclosed spaces filled with zombies. Later, The Coyote herself blows off the pretense of playing nice with Alpha Zombies, going to the extent of intentionally angering them by leaving a dead Alpha in the street.

Army of the Dead, Sardar Ka Grandson, and More on Netflix in May

These nonsensical plot developments are all over the place in Army of the Dead, which contributes to a film that's frequently irrational. Take for instance the fact that even those with minimal gun experience blow off head shots in high pressure situations. Snyder also doesn't seem to care about any of the ensemble cast save for Bautista and Purnell, as evinced by the useless arcs for everyone else. Even Purnell is a turned into a white saviour with Qureshi being reduced to a damsel in distress. Others are just zombie fodder, and Snyder uses them for mere shock value. This could've worked if Army of the Dead was poking fun at the genre, but Snyder has never been good at humour. The funniest aspect of Army of the Dead is how all of Notaro's scenes are by herself, because Snyder had to insert her in late into the production, due to sexual misconduct allegations against the original actor, Chris D'Elia.

In 2004, Snyder made his feature film directorial debut by remaking zombie legend George A. Romero's Dawn of the Dead — except it now had faster zombies. With Army of the Dead, Snyder is then returning to the genre he got his start with. But there's nothing here to suggest that Snyder has grown as a filmmaker over the past 17 years. Appropriately, for a guy who got his start in commercials and music videos, the best part of the film is the musical montage opening credits that I don't wish to spoil. Everything else is too Snyder-y. When Army of the Dead was announced in early 2019, he said: “There are no handcuffs on me at all with this one. No one's ever let me completely loose [like this].”

Between Justice League, where Snyder was shackled, and Army of the Dead on Netflix, we now have two extremes. And it's clear that neither produce great results. Maybe it wouldn't be so bad to have some degree of handcuffs next time.

Army of the Dead is out Friday at 12:30pm IST on Netflix worldwide. In India, it is available in English and Hindi.

Army of the Dead