Google.org has also separately announced the grant of $500,000 (roughly Rs. 3.93 crore) to support organisations providing support in the affected areas. 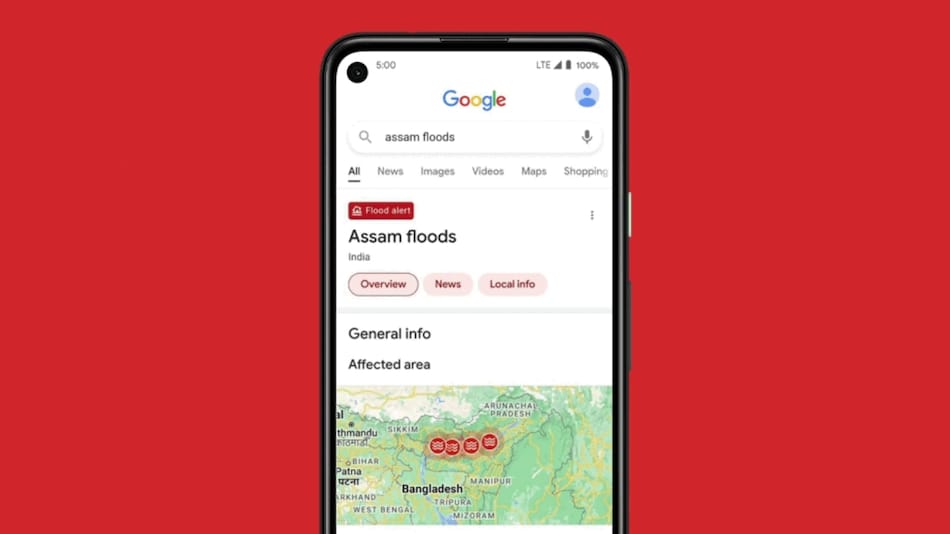 Google on Tuesday announced that it has launched an SOS Alert feature for Assam floods to let users close to the affected areas look at emergency phone numbers, websites, and maps directly using Google Search. Alongside Google Search, Google Maps is highlighting the affected areas to assist rescue teams and people planning to give aid to the locals impacted due to the flood situation. Google.org, the charitable arm of Google, separately announced a grant to support community-based organisations providing support to people in the affected areas.

The launch of the SOS Alert has enabled users to get updates from authoritative local and national sources by searching for "Assam floods" or "Assam floods emergency resources" on Google Search. People close to the affected areas also see emergency phone numbers, websites, and maps to get relevant support.

For users who are outside the affected area, searching for Assam floods will show an SOS alert with timely updates of the situation, Google said in a blog post.

Users can also take assistance from Google Maps to provide aid to people in the affected areas. It highlights the areas where the flood has heavily impacted.

In 2017, Google introduced SOS Alert as an integrated feature within its Search and Maps products to inform people in a crisis situation. The company takes information from local authorities to show them on top of search results.

Since the launch, the feature has been activated in various causes of human-caused and natural disasters including floods and earthquakes.

Google.org also separately announced the grant of $500,000 (roughly Rs. 3.93 crore) to the Center for Disaster Philanthropy. The company said that it will be aimed "to support community-based organisations working to provide emergency support and long-term recovery in the affected areas."

Additionally, Google launched a campaign to match 100 percent of what its employees donate for the crisis. Google Pay has also included Spots for Smile Foundation and Goonj to let users donate funds towards flood relief efforts in Assam. The company said that it would continue to include more organisations that are running fundraising efforts for the flood relief.

The ongoing flood situation has affected as many as 2,254 villages and 22 districts in Assam. The devastating flood has also impacted a total population of over 21 lakh, according to the recent data shared by the Assam State Disaster Management Authority (ASDMA).

Due to many areas submerged in the state, at least 134 people lost their lives, with eight deaths reported on Monday.