The Infinix Inbook X1 Slim will be the successor of the Inbook X1 laptop, as per the company. 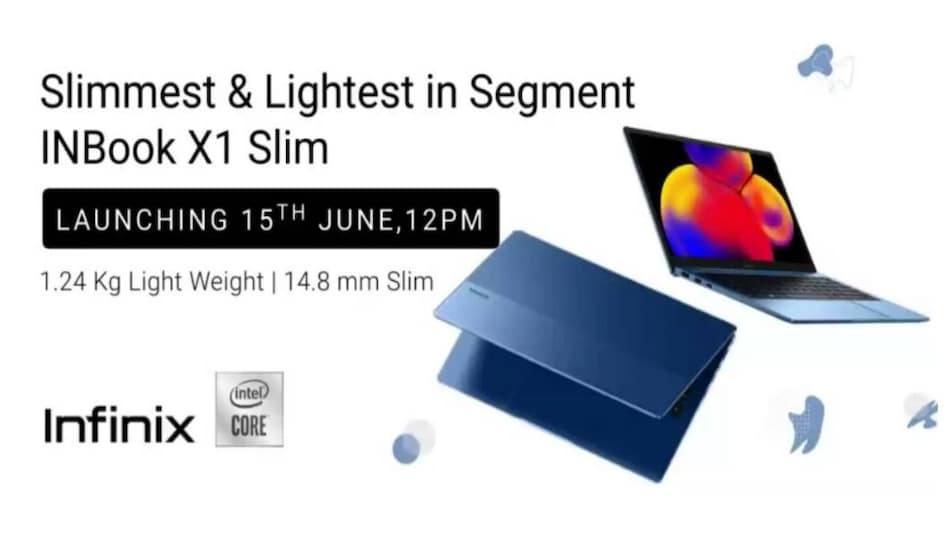 The Infinix Inbook X1 Slim will be available in Blue, Green, Red and Grey colours

Infinix Inbook X1 Slim is set to launch in India on June 15, the company has confirmed. The company has stated that the Inbook X1 Slim will come with a high battery capacity and a USB Type-C port. The laptop is claimed to be the slimmest and lightest in the Inbook X1 series segment. It will also feature an aluminium alloy metal body and retain the 10th Gen Intel Core i3, i5, and i7 SoCs. To recall, the upcoming laptop's predecessor, Infinix Inbook X1, was launched in India in December last year.

The pricing of the Infinix Inbook X1 Slim laptop is yet to be revealed by the company and should be known with its launch next week. However, it has been confirmed that the upcoming laptop will be available to purchase in Blue, Green, Red, and Grey colours.

The Infinix Inbook X1 slip laptop is claimed to have a 14.8mm thickness and weigh just 1.24 kilogram. Infinix has claimed that the upcoming laptop will be the lightest and thinnest laptop in the price segment. The company has also confirmed that the laptop will be equipped with a high battery capacity and come with a USB Type-C port with charging capability, which will enable the users to transfer data, share displays, and charge the laptop as well as their smartphones. On the other hand, the upcoming laptop is said to be powered by the older 10th Gen Intel Core i3, i5, and i7 SoCs.

Moreover, the company has also said that the Infinix Inbook X1 Slim will be the successor of the Inbook X1 laptop.

The Infinix Inbook X1 was launched in India in December last year. The laptop comes with Intel Core i3 and Core i5 processor options. It runs on Windows 11 out-of-the-box and features a 14-inch full-HD IPS display.​