The Black Shark 3 is listed with model numbers Shark MBU-A0 and Shark KLE-A0 on the 3C certification site. 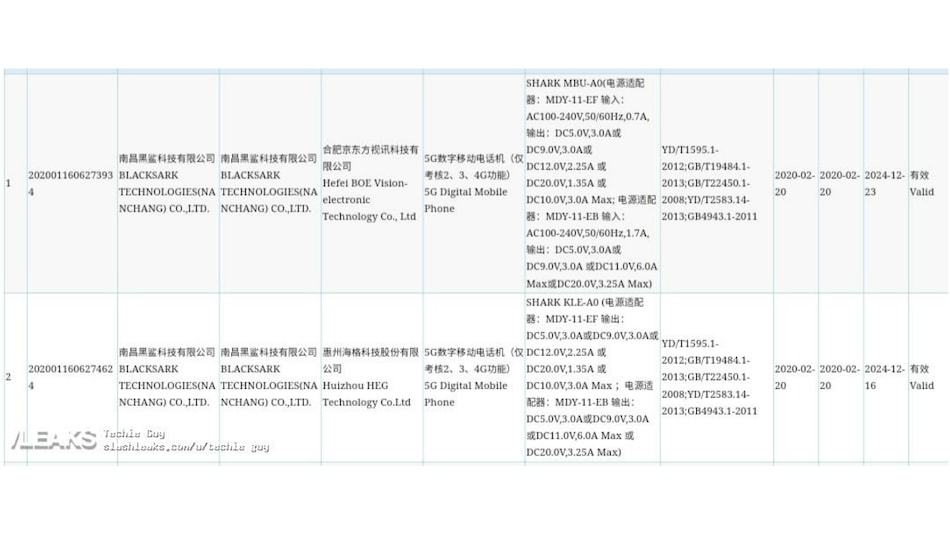 Black Shark 3, the probable successor of the Black Shark 2 gaming phone launched last year, has allegedly been spotted on 3C certification site in China. The listing reveals that the Black Shark 3 will come with support for 65W fast charging. The listing mentions little else about the phone, and there's no word on when this phone may be launched as of yet. The company has announced a strategic partnership with Tencent Games recently, and the co-operation aims "to bring a better mobile game experience to the majority of players in the future."

The 3C certification of the Black Shark 3 phone was spotted online, and a screenshot of it was shared on Slashleaks. The screenshot suggests that the phone will support 5G, and it is listed with model numbers Shark MBU-A0 and Shark KLE-A0. As mentioned, the 3C certification listing also suggests that the Black Shark 3 phone will support 65W fast charging. Apart from this, there is little else that the certification site gives out. Black Shark also announced its partnership with Tencent Games on Weibo last month, but didn't detail on plans. Tencent Games is popular for creating games like PUBG Mobile, and the partnership will presumably look to bring hardware and software optimisations on the next gaming phone from Black Shark.

Separately, Black Shark CEO luo Yuzhou was seen taking a poll on Weibo to ascertain the best charging combination for a 5G gaming phone. Out of the many options, most fans selected the 5,000mAh with 65W charging combination that not only allows the phone to fully charge in 38 minutes, but also helps maintain a healthy life cycle. While this can't be considered as a heavy indication, but it could mean that the company may consider integrating a 5,000mAh battery inside the upcoming Black Shark 3, given that it has already been leaked to support 65W fast charging.

As already mentioned, very little is known about the Black Shark 3 at the moment, and we expect more details to surface in the near future.