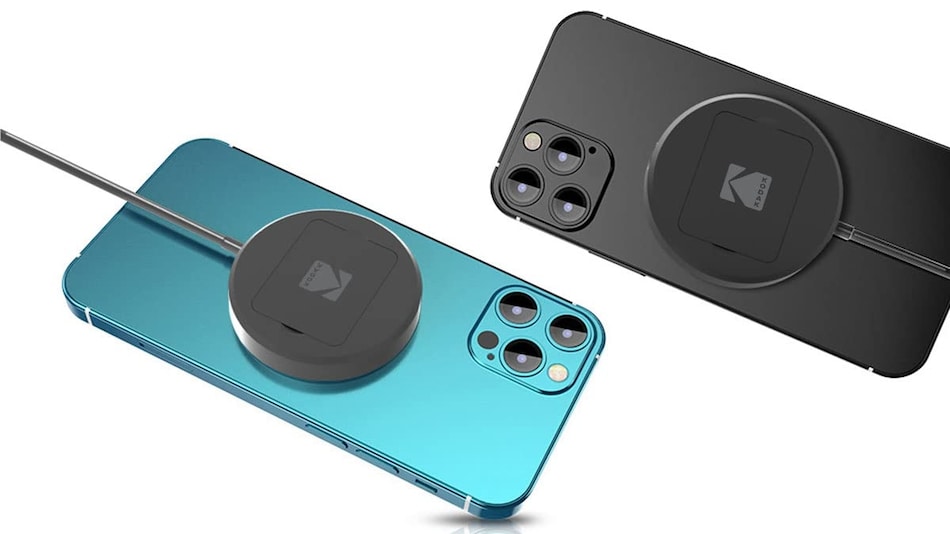 Kodak has launched magnetic wireless chargers in India that are compatible with Apple iPhone 12 and Apple iPhone 13 series. While one is for use in the car, the other one is for juicing up an iPhone 12 or iPhone 13 series handset at home or office. Both of the chargers offer 15W maximum charging power. Kodak announced a licensing agreement with Bengaluru-based Georgian Enterprises to sell such consumer electronics in the Indian market. The US-based photography company also said that it will launch more exciting products in future.

As per the company, the Kodak Magnetic Wireless Charger for car (15W) and for home (15W) is available for an introductory price of Rs. 2,499 on Amazon. As per Kodak, the charger will be soon be available on Flipkart as well.

Kodak Magnetic Wireless Charger for car (WCM101C) can be fitted onto a standard Car AC vent with easy to detach vent hook and grip-locking ring. It features a square body with neodymium magnets around its edges. As per the company, the charger keeps the iPhone safe from scratches, and prevents it from slipping while the user is driving. It sports a 360-degree rotating ball mount allowing users to stick the phone in any orientation.

Kodak Magnetic Wireless Charger for car is equipped with an intelligent charging chip and offers a maximum power of 15W. It is certified with high protection features such as over-voltage, over-current, over-temperature and over-charging, Kodak says.

Meanwhile, the Kodak Magnetic Wireless Charger for home or office (WCM201) also offers a high-speed 15W desk chargercum-stand. It comes with the similar neodymium magnets for a secure hold as the one in the car charger, however, it has a compact kickstand allowing users to position the phone in upright position.