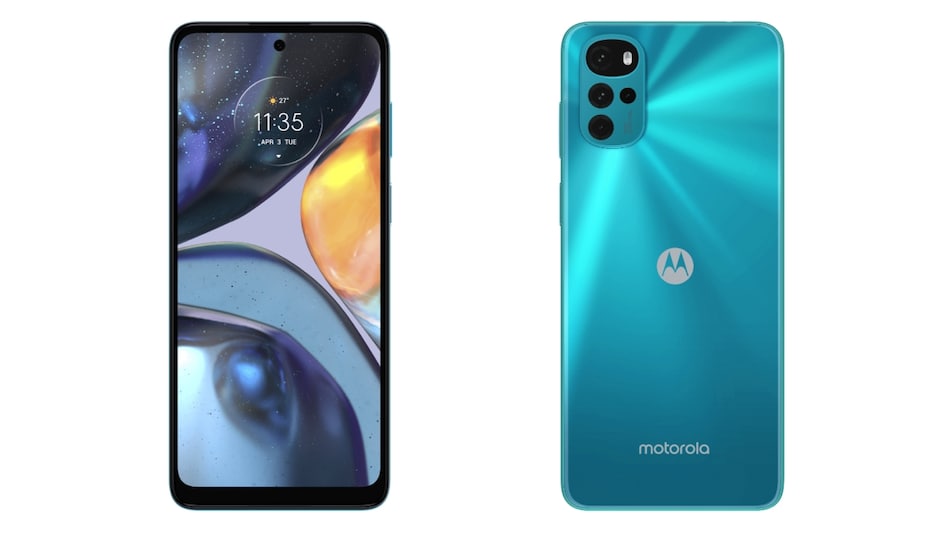 The Moto G22 is equipped with a quad rear camera setup

Moto G22 is tipped to launch in India next week, as the latest affordable smartphone from Motorola. The smartphone made its debut in Europe last month, and is equipped with a MediaTek Helio G37 SoC, paired with a 4GB of RAM. It sports a 6.5-inch LCD screen with a 90Hz refresh rate. The handset is equipped with a 50-megapixel quad rear camera setup and packs a 5,000mAh battery. Motorola is yet to officially announce any information regarding the launch schedule or specifications of the Moto G22 in India.

According to a report by 91Mobiles citing unnamed sources, the Moto G22 will debut in India between April 4 and April 8. The handset was silently launched by Motorola in Europe on March 3, priced at EUR 169.99 (roughly Rs. 14,300) for the sole 4GB + 64GB storage model. It is available in Cosmic Black, Iceberg Blue, and Pearl White colour options.

While announcing the launch of the Moto G22 in European markets, the company had revealed that the handset would be available in India, Asia, Latin America, and the Middle East in "the coming weeks".

The Moro G22 that was launched in Europe last month is a dual-SIM (Nano) smartphone that runs Motorola's Android 12-based MyUX skin. The handset sports a 6.5-inch HD+ (720x1,600 pixels) MaxVision LCD screen with a 90Hz refresh rate. It is powered by an octa-core MediaTek Helio G37 SoC with a PowerVR GE8320 GPU, along with 4GB of RAM.

The Moto G22 offers 64GB of inbuilt storage that can be expanded via (up to 1TB) via a microSD card slot. Connectivity options on the smartphone include 4G LTE, Wi-Fi, Bluetooth v5, NFC, GPS/ A-GPS, USB Type-C, and a 3.5mm headphone jack. The handset features a proximity sensor, an ambient light sensor, an accelerometer, a gyroscope, an e-compass, and a side-mounted fingerprint sensor. The Moto G22 packs a 5,000mAh battery with support for 15W charging.