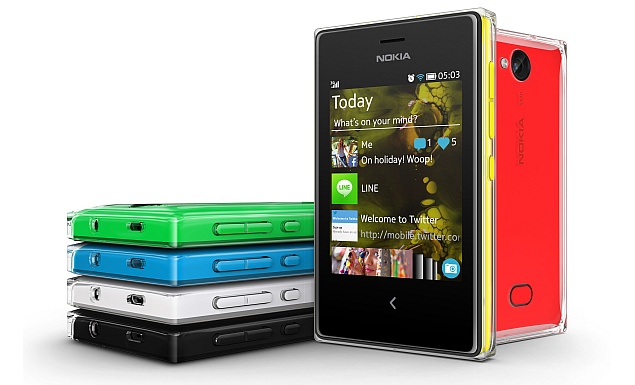 Nokia has expanded its Asha range of phones in India, and launched the Asha 500, Asha 502 and Asha 503 for the Indian market.

The Nokia Asha 500 has been priced at Rs. 4,499 and will be available by the end of this month. The Asha 500 will come with free access to WhatsApp for TATA Docomo subscribers for three months, after which the subscribers will be charged Rs. 17 per month for next nine months.

On the other hand, the Nokia Asha 502 is now available in India at Rs. 5,969 and it comes with 500MB of free 2G data usage for Idea subscribers for three months. The Nokia Asha 502 was listed earlier this week on the company's online store.

The Nokia Asha 503 has been priced at Rs. 6,799 and will be available in January 2014. The Nokia Asha 500, Asha 502 and Asha 503 phones are based on Nokia Asha Platform 1.1 and feature the updated Fastlane app, which was introduced in Asha 501, one-swipe access to camera app and one-touch sharing feature on WhatsApp.

The Finnish handset maker unveiled the Asha 500, Asha 502 and Asha 503 in October at Nokia World.

The Nokia Asha 500 comes with 2.8-inch QVGA display. The Asha 500 comes in dual-SIM (GSM+GSM) variant with Nokia's Easy Swap technology and also supports dual standby. It sports a 2-megapixel rear camera. The Asha 500 comes with 64MB RAM and supports expandable storage up to 32GB via microSD card. It packs a 1200mAh battery which can deliver up to 14 hours of talktime and up to 528 hours of standby time. It will be available in Bright Red, Black, White and Yellow colour variants.

It comes with 1010mAh battery which can deliver up to 480 hours of standby time and up to 14 hours of talktime. It measures 99.6x 59.5x11.1mm and weighs 100 grams. The Nokia Asha 502 sports a 5-megapixel rear camera with LED flash. It comes with expandable storage support up to 32GB with the help of microSD card.

The Nokia Asha 503 features a 3-inch display and boasts of a Corning Gorilla Glass 2 protection. It sports a 5-megapixel rear camera with LED flash. Much like Asha 500 and Asha 502, the Asha 503 is also dual-SIM device (in India at least) with dual standby support. It comes with 64MB RAM and supports expandable storage up to 32GB via microSD card. The Asha 503 packs an 1110mAh battery which can deliver up to 12 hours of talktime and up to 480 hours of standby time.