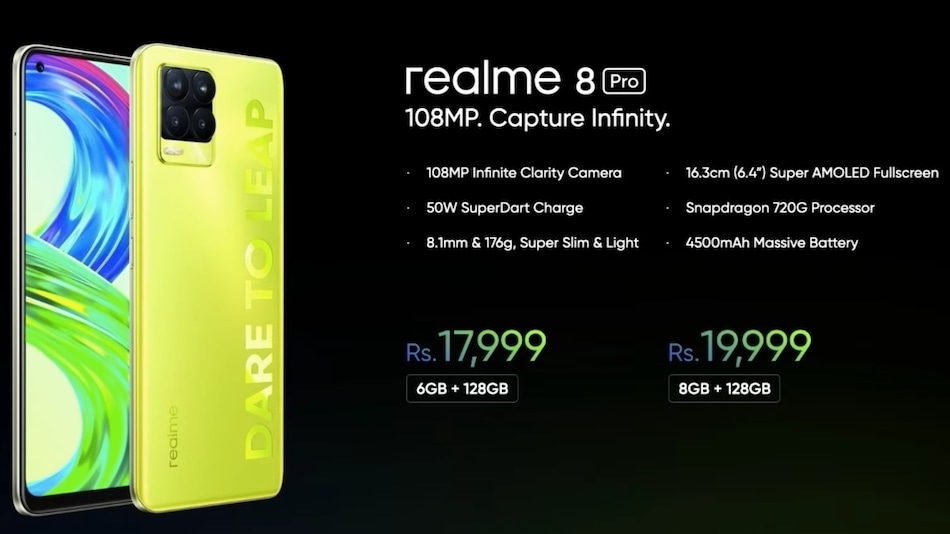 Realme 8 Pro Illuminating Yellow colour variant will carry a price tag of Rs. 17,999 for the 6GB + 128GB storage variant and Rs. 18,999 for the 8GB + 128GB storage option. The pricing is identical to the existing Realme 8 Pro colour versions. On the availability front, the Illuminating Yellow colour model will go on first sale at 12pm (noon) on April 26 through Flipkart, Realme.com, and offline retail stores.

Specifications-wise, Realme 8 Pro Illuminating Yellow variant is just the same as what was launched last month. The teaser suggested that the bright yellow-coloured camera module and the company's Dare To Leap branding at the back would glow in the dark, while the rest of the back panel would not show any changes and have a regular yellow colour paint job.

Realme 8 Pro sports a 6.4-inch full-HD+ (1,080x2,400 pixels) Super AMOLED display with 20:9 aspect ratio. It is powered by an octa-core Qualcomm Snapdragon 720G SoC, along with up to 8GB of LPDDR4x RAM and up to 128GB of onboard storage. The smartphone comes with a quad rear camera setup that has a 108-megapixel primary sensor along with a 16-megapixel selfie camera at the front. It packs a 4,500mAh battery that supports 50W SuperDart Charge fast charging technology.

In addition to the launch of the Realme 8 Pro Illuminating Yellow colour variant, Realme India and Europe Vice President and CEO Madhav Sheth teased the arrival of the Realme X7 Max in the country during the launch of Realme 8 5G. “Get ready to activate your Max 5G speed with India's first MediaTek Dimensity 1200 5G processor,” Sheth said.

The executive did not confirm the exact name of the new model, though it is expected to be the Realme X7 Max that was tipped recently. The upcoming phone was initially believed to come as a rebranded Realme X7 Pro Ultra that has a MediaTek Dimensity 1000+ SoC. However, the latest teaser suggests that it could be powered by MediaTek Dimensity 1200.

At the virtual MediaTek Technology Diaries session earlier this week, Sheth announced that Realme will be launching the country's first MediaTek Dimensity 1200-powered smartphone very soon. It was initially speculated to be the Realme GT Neo that was launched with the same chipset in China last month.

Details about the exact availability and pricing of the Dimensity 1200-powered Realme phone are yet to be revealed.