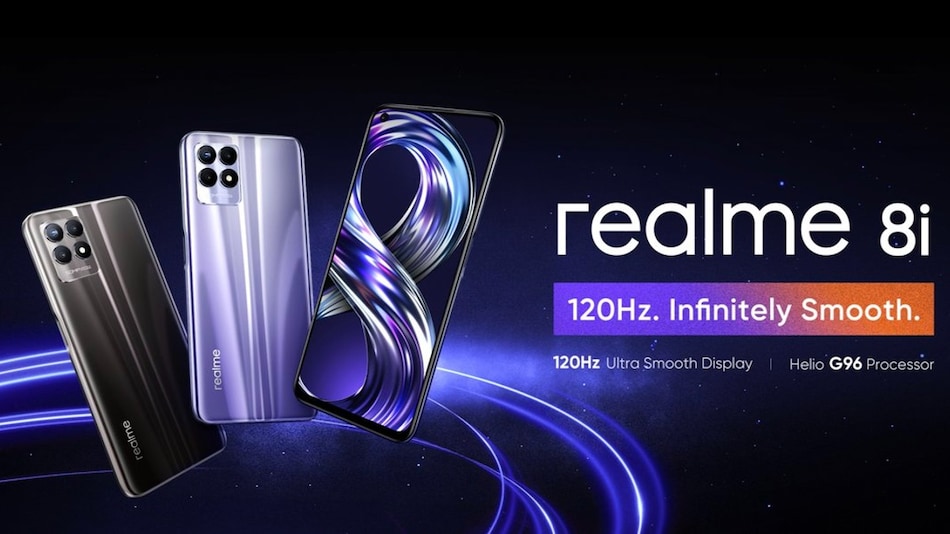 Realme 8i price in India has been set at Rs. 13,999 for 4GB RAM + 64GB storage variant. The phone also comes in a 6GB RAM + 128GB storage configuration that is priced at Rs. 15,999. In contrast, the Realme 8s 5G carries a price tag of Rs. 17,999 for the 6GB RAM + 128GB storage variant, while its 8GB RAM + 128GB model comes at Rs. 19,999. The Realme 8i will be available in Space Black and Space Purple colours from 12pm (noon) on September 14, whereas the Realme 8s 5G will go on sale in Universe Blue and Universe Purple shades starting 12pm (noon) on September 13. Both phones will be available for purchase through Flipkart, Realme.com, and major offline retailers in the country.

Under the hood, the Realme 8i houses an octa-core MediaTek Helio G96 SoC that was launched in July. The chipset is coupled with up to 6GB of LPDDR4x RAM. The 6GB RAM version of the phone also supports 5GB Virtual RAM that enhances multitasking by using the phone's free storage.

On the part of optics, the Realme 8i carries a triple rear camera setup that has a 50-megapixel primary Samsung S5KJN1 sensor with an f/1.8 five-piece lens, along with a 2-megapixel monochrome portrait sensor and a 2-megapixel sensor with a macro lens. The smartphone features a 16-megapixel selfie camera sensor in the front that supports artificial intelligence (AI) backed beautification functions, HDR mode, portrait mode, and a ‘Panoselfie' feature, which is claimed to help capture wider selfies.

The Realme 8i comes with up to 128GB of onboard storage that supports expansion via a microSD card (up to 256GB) through a dedicated slot. Connectivity options include 4G VoLTE, dual-band Wi-Fi, Bluetooth v5.0, GPS/ A-GPS, and a Micro-USB port. Sensors on board include an accelerometer, ambient light, magnetometer, and a proximity sensor. The phone also comes with a side-mounted fingerprint sensor.

The dual-SIM (Nano) Realme 8s 5G runs on Android 11 with Realme UI 2.0 on top and features a 6.5-inch full-HD+ (1,080x2,400 pixels) display with a 20:9 aspect ratio, 90Hz refresh rate, and a 180Hz touch sampling rate. The display gives the phone a 90.5 percent screen-to-body ratio and comes with 600 nits of peak brightness. The Realme 8s 5G is powered by an octa-core MediaTek Dimensity 810 SoC that was launched last month. The chip is paired with up to 8GB of LPDDR4x RAM. Just like the Realme 8i, the Realme 8s 5G also comes with 5GB Virtual RAM support.

The Realme 8s 5G comes with a 16-megapixel selfie camera sensor in the front with an f/2.1 lens for selfies and video chats.

In terms of storage, the Realme 8s 5G has 128GB of UFS 2.1 storage as standard that is expandable via a microSD card (up to 1TB) through a dedicated slot. Connectivity options include 5G, 4G VoLTE, Wi-Fi 802.11ac, Bluetooth v5.1, GPS/ A-GPS, and a USB Type-C port. Sensors on board include an accelerometer, ambient light, gyroscope, magnetometer, and proximity sensor. There is also a side-mounted fingerprint sensor.