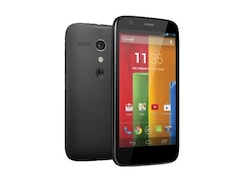 Budget smartphones might not attract as much attention as their high-end counterparts, but there is no denying that these devices are in massive demand, especially in markets like India. Motorola's Moto G is an attempt to grab buyers' attention by offering a number of features at an extremely reasonable price.

Motorola Moto G price in India starts from ₹ 3,471. The lowest price of Motorola Moto G is ₹ 3,471 at Flipkart on 7th December 2022. This Phone is available in 1 other variant like 16GB with colour options like Black.