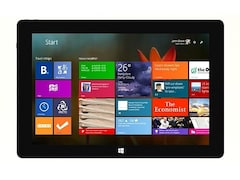 The name Notion Ink brings up a lot of memories. Four years ago, when the original iPad was brand new and every hardware company in the world was rushing to produce a marketable alternative, one plucky Indian startup arrived on the scene all of a sudden with its own, apparently revolutionary new product. It didn't take the Notion Ink Adam long to become a sensation - its unusual design, custom user interface and dual-mode Pixel Qi screen were just some of the features that stood out compared to everything else available at the time. Excitement and anticipation ran high for what seemed like years, and hordes of people were willing and eager to buy an Adam. Blogs and forums dedicated to it lit up the Internet, while even mainstream news outlets praised the tiny startup, its vision and ambitions.

Hyderabad-based Notion Ink's biblically named Cain is a 10-inch Windows 8.1 tablet that comes with a wraparound case which doubles as a keyboard and stand, making it usable as a hybrid laptop. This brings Windows to a market segment previously dominated by Android tablets and iPads. We liked having a tablet with full USB host support and the flexibility to run most common Windows programs. Performance was consistent with that of other entry-level tablets, although we did encounter usability issues caused by mismatches between Windows 8.1 and the hardware.