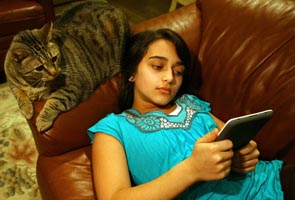 Highlights
Something extraordinary happened after Eliana Litos received an e-reader for a Hanukkah gift in December.

"Some weeks I completely forgot about TV," said Eliana, 11. "I went two weeks with only watching one show, or no shows at all. I was just reading every day."

Ever since the holidays, publishers have noticed that some unusual titles have spiked in e-book sales. The "Chronicles of Narnia" series. "Hush, Hush." The "Dork Diaries" series.

At HarperCollins, for example, e-books made up 25 percent of all young-adult sales in January, up from about 6 percent a year before -- a boom in sales that quickly got the attention of publishers there.

"Adult fiction is hot, hot, hot, in e-books," said Susan Katz, the president and publisher of HarperCollins Children's Books. "And now it seems that teen fiction is getting to be hot, hot, hot."

In their infancy e-readers were adopted by an older generation that valued the devices for their convenience, portability and, in many cases, simply for their ability to enlarge text to a more legible size. Appetite for e-book editions of best sellers and adult genre fiction -- romance, mysteries, thrillers -- has seemed almost bottomless.

But now that e-readers are cheaper and more plentiful, they have gone mass market, reaching consumers across age and demographic groups, and enticing some members of the younger generation to pick them up for the first time.

"The kids have taken over the e-readers," said Rita Threadgill of Harrison, N.Y., whose 11-year-old daughter requested a Kindle for Christmas.

In 2010 young-adult e-books made up about 6 percent of the total digital sales for titles published by St. Martin's Press, but so far in 2011, the number is up to 20 percent, a spokeswoman for the publisher said.

At HarperCollins Children's Books e-book sales jumped in recent weeks for titles like "Pretty Little Liars," a teenage series by Sara Shepard; "I Am Number Four," a paranormal romance by Pittacus Lore; and "Before I Fall," a novel by Lauren Oliver. (Some sales, publishers noted, are from older people crossing over to young-adult fiction.)

Jon Anderson, the publisher of Simon & Schuster Children's Publishing, said some titles, like "Clockwork Angel" and books in the "Night World" series, nearly doubled their e-book sales in the four weeks after Christmas, compared with the four weeks before.

"We had an instant reaction -- 'Boy, a lot of kids got e-readers for Christmas,' " Mr. Anderson said, adding that another significant bump in sales occurred over the three-day weekend that included Martin Luther King's Birthday. "If it follows the same trend as adults, it's the start of an upward curve."

Digital sales have typically represented only a small fraction of sales of middle-grade and young-adult books, a phenomenon usually explained partly by the observation that e-readers were too expensive for children and teenagers.

Another theory suggested that the members of the younger set who were first encouraged to read by the immensely popular Harry Potter books tended to prefer hardcover over any other edition, snapping up the books on the day of their release. And anecdotal evidence hinted that younger readers preferred print so that they could exchange books with their friends.

That scene may be slowly replaced by tweens and teenagers clustered in groups and reading their Nooks or Kindles together, wirelessly downloading new titles with the push of a button, studiously comparing the battery life of the devices and accessorizing them with Jonathan Adler and Kate Spade covers in hot pink, tangerine and lime green.

"The young adults and the teenagers are now the newest people who are beginning to experience e-readers," said Matthew Shear, the publisher of St. Martin's Press. "If they get hooked, it's great stuff for the business."

It is too soon to tell if younger people who have just picked up e-readers will stick to them in the long run, or grow bored and move on.

But Monica Vila, who runs the popular Web site The Online Mom and lectures frequently to parent groups about Internet safety, said that in recent months she had been bombarded with questions from parents about whether they should buy e-readers for their children.

In a speech last month at a parents' association meeting in Westchester County, Ms. Vila asked for a show of hands to indicate how many parents had bought e-readers for their children as holiday gifts.

About half the hands in the room shot up, she recalled.

"Kids are drawn to the devices, and there's a definite desire by parents to move books into this format," Ms. Vila said. "Now you're finding people who are saying: 'Let's use the platform. Let's use it as a way for kids to learn.' "

Some teachers have been encouraging, too, telling their students that they are allowed to bring e-readers to school for leisure reading during homeroom and English class, for example.

"I didn't buy it until I knew that the teachers in middle school were allowing kids to read their books on their e-readers," said Amy Mauer-Litos, Eliana's mother, adding, "I don't know whether it's the device itself that is appealing, or the easy access to the books, but I will tell you, we've had a lot of snow days lately, and 9 times out of 10, she's in the family room reading her Nook."

Some younger readers have been exploring the classics, thanks to the availability of older e-books that are in the public domain -- and downloadable free.

After receiving a light gray Sony Reader from her grandparents for Christmas, Mia Garcia, a 12-year-old from Touchet, Wash., downloaded "Little Women," a book she had not read before.

"It made me cry," Mia said. "Then I read 'Hunger Games,' " the best-selling dystopian novel, "and it also made me cry."

Her 8-year-old brother, Tommy, was given an e-reader, too. "I like it because I have so many different books on it already," he said, including "The Trouble Begins at 8," a fast-paced biography of Mark Twain written for children in the middle grades.

Eryn Garcia, their mother, said the family used the local library -- already stocked with more than 3,000 e-books -- to download titles free, sparing her the usual chore of "lugging around 40 pounds of books."

"There's something I'm not sure is entirely replaceable about having a stack of inviting books, just waiting for your kids to grab," Ms. Garcia said. "But I'm an avid believer that you need to find what excites your child about reading. So I'm all for it."

Mobile phone radiations pose serious health risks: Study
Who's the boss, you or your gadget?