The findings were validated through laboratory analysis of samples that Chang'E-5 had brought in 2021. 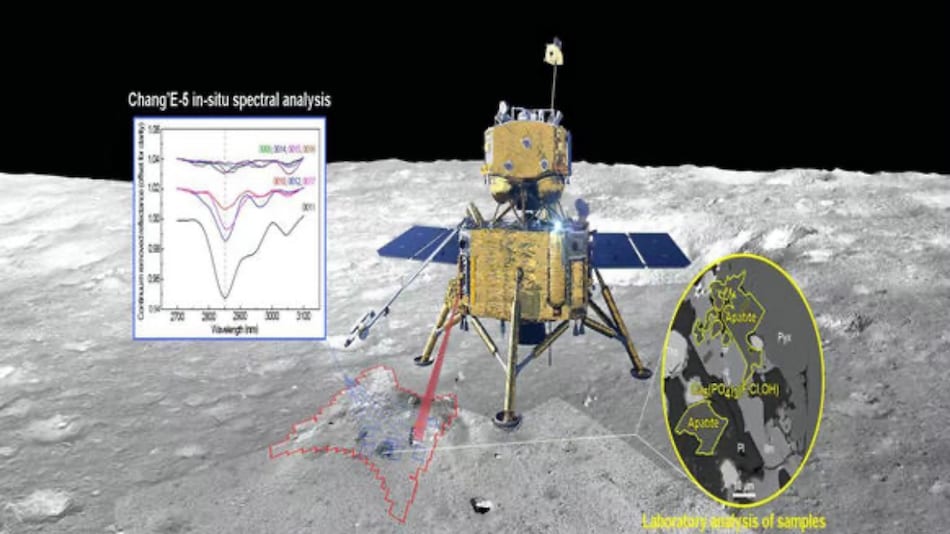 The samples were collected when temperatures on the moon were high

Now, the lander has found water at its landing site near Moon's Oceanus Procellarum — translating to ‘Ocean of Storms' — which is an ancient mare basalt. The Chang'E-5 sent an on-site definitive signal on the confirmation of water in the basalt's rock and soil through an onboard spectral analysis in 2020. The findings were then validated through laboratory analysis of samples that Chang'E-5 had brought in 2021.

The findings of the research have been now published in Nature Communications.

“For the first time in the world, the results of laboratory analysis of lunar return samples and spectral data from in-situ lunar surface surveys were used jointly to examine the presence, form and amount of 'water' in lunar samples,” said co-author Chunlai Li from the National Astronomical Observatories of the Chinese Academy of Sciences (NAOC).

Chang'E-5 detected around 30 hydroxyl parts per million in soils and rocks on the lunar surface, the report says. Hydroxyl contains one hydrogen and one oxygen atom which are the main constituents of water. In addition, it is also the most common result of water reacting with other matter. The hydroxyl was first detected by the lunar's mineralogical spectrometer in 11 rock and soil samples and was confirmed by five multi-part laboratory analyses conducted on eight of the samples.

The samples were collected when temperatures on the moon were high and reached 200 degrees Fahrenheit with the surface being the driest. It was also the time of low solar winds which can result in hydration at high enough power.

The hydroxyl collected by Chang'E-5 was majorly contained in a crystalline, phosphate-rich mineral called apatite that is naturally found to be on moon and Earth as well. “This excess hydroxyl is indigenous, demonstrating the presence of lunar-originated internal water in the Chang'E-5 lunar samples, and that water played an important role in the formation and crystallisation of the late lunar basaltic magma,” said Li.

Li added that investigating the lunar water and its source will help to unearth information on the formation and evolution of the moon and the solar system.