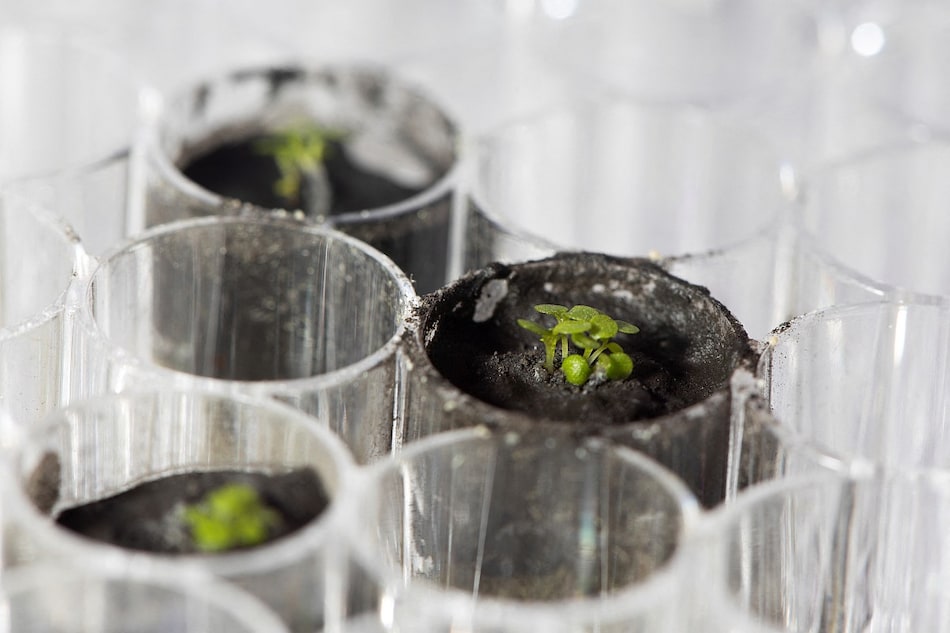 Scientists for the first time have grown seeds in soil from the moon - samples retrieved during NASA missions in 1969 and 1972 - in an achievement that heralds the promise of using earthly plants to support human outposts on other worlds.

Researchers said on Thursday they planted seeds of a diminutive flowering weed called Arabidopsis thaliana in 12 small thimble-sized containers each bearing a gram of moon soil, more properly called lunar regolith, and watched as they sprouted and grew. Lunar regolith, with its sharp particles and lack of organic material, differs greatly from Earth soil, so it was unknown whether seeds would germinate.

"When we first saw that abundance of green sprouts cast over all of the samples, it took our breath away," said horticultural sciences professor Anna-Lisa Paul, director of the University of Florida Interdisciplinary Center for Biotechnology Research and co-leader of the study published in the journal Communications Biology.

"Plants can grow in lunar regolith. That one simple statement is huge and opens the door to future exploration using resources in place on the moon and likely Mars," Paul said.

Every seed germinated and there were no outward differences at the early stages of growth between those sown in the regolith - composed mostly of crushed basalt rocks - and seeds sown for comparative reasons in volcanic ash from Earth with similar mineral composition and particle size.

The regolith seeds, perhaps unsurprisingly, did less well than the comparison plants. They were slower to grow and generally littler, had more stunted roots and were more apt to exhibit stress-related traits such as smaller leaves and deep reddish black coloration not typical of healthy growth. They also showed gene activity indicative of stress, similar to plant reactions to salt, metal and oxidation.

"Even though plants could grow in the regolith, they had to work hard metabolically to do so," Paul said.

To the researchers, the fact that they grew at all was remarkable. Study co-leader Rob Ferl, a University of Florida assistant vice president for research, said he felt "joy at watching life do something that had never been done before."

Arabidopsis, also called thale cress, is widely used in scientific research, including previous experiments in orbit, owing to its speedy life cycle and a deep understanding of its genetics.

NASA made available 12 grams - just a few teaspoons — of regolith collected during the Apollo 11, Apollo 12 and Apollo 17 missions. The researchers planted three or four seeds in a dozen containers moistened with a nutrient solution, then placed them in a laboratory at about 73 degrees Fahrenheit (23 degree C) under LED lights giving off a pink hue.

The seeds sprouted within three days. After about a week of growth, the researchers removed all but one plant from each container. The one was left to grow until it was 20 days old, with its leaves then harvested to assess gene activity.

The researchers also determined that regolith that had experienced longer exposure to cosmic rays and solar wind on the lunar surface was less hospitable to growth.

Earth plants could help people establish outposts in places like the moon and Mars, as depicted in the 2015 film The Martian when an astronaut grew potatoes on the Red Planet. NASA's Artemis program envisions people returning to the moon's surface in the coming years.

"Plants are deeply embedded in the science of space exploration because of their life-support role, especially when we consider leaving the Earth for extended periods of time," Ferl said.