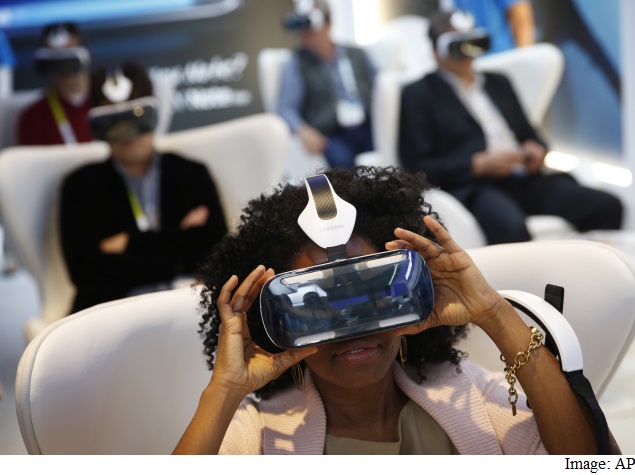 If you make a game in virtual reality, or VR, now you can sell it to customers instead of giving it away free. It's the biggest step yet toward discovering what kinds of creative works will prove most successful in this new medium - an immersive, sensorially isolating experience that is either the art form of the 21st century or the biggest fad of 2016.

Last Monday, the store inside the Gear VR, a headset powered by a fancy Samsung phone and the technology of Oculus VR (the company Facebook acquired for $2 billion last year), opened for business at the start of the Game Developers Conference here.

Samsung and Oculus don't advertise the Gear VR as a consumer product. They prefer to call it an "innovator edition" for early adopters. But you can buy it, and if you own it, you can spend your money - for now all the games are $10 or less - on the first wave of virtual reality games to hit the marketplace.

There's only one catch: No one's sure what virtual reality goggles are good for just yet.

"That is definitely the million-dollar question," said Levi Miller, an engineer at Valve, a game developer and distributor, when I asked him what experiences would work best in virtual reality. Mark Zuckerberg might say it's more like a $2 billion question.

"The truth is, we still don't know what the best applications are going to be," John Carmack, the chief technology officer of Oculus, said during a speech at the conference.

I tried on my first virtual reality headset two years ago, when people waited in line for hours on the expo floor at that year's Game Developers Conference at the Moscone Center to check out the Oculus Rift. At this year's show, virtual reality transitioned from a glimpse of the future to a plausible holiday gift. Sony announced that its headset, Project Morpheus, would go on sale by the middle of next year as a PlayStation 4 accessory.

Carmack revealed that a wide release of a new version of the Gear VR is being planned by Samsung and Oculus for this year.

And the closed-door demonstrations of the Vive, a collaboration between Valve and HTC, were the talk of the show. The Vive, which runs on a high-end personal computer, uses lasers - emitted from a pair of base stations - to track players as they move within a space of about 15 feet by 15 feet. It, too, will go on sale, for an as yet undisclosed price, before this year ends.

When you're wearing a Vive, a white line on the virtual ground demarcates where it's safe to walk. When I tried to move past it, a white checkerboard rose up in digital space to indicate the existence of a wall in physical space (and the possibility of a broken nose). Its tracking of movements is accurate enough that I could reach out and knock.

The Vive demos were breathtaking. Using a pair of motion controllers that come with the system, I painted colored lines in the air and then circled around them on my feet to admire my work. I looked into the eye of a blue whale as it floated past while I stood on the prow of a sunken ship.

Experiences like these - and similar ones that can be had inside an Oculus or Morpheus headset - are probably enough to sell millions of units. But you can invite your neighbors over to watch a blue whale float through your living room only so many times. Once the novelty wears off, how are you going to spend your time inside these new virtual worlds?

For now, no one at Oculus, Sony or Valve has given a persuasive demonstration of how players will travel inside virtual reality, beyond exploring a small area on foot for the Vive. Like video games, virtual reality is a spatial medium, one that people are going to want to explore and interact with, not merely observe.

"In VR, there is this amazing but very unforgiving 360-degree view of the world," said Daniel Smith, a software developer at Weta Digital, during a panel discussion at the conference. "Just bringing stuff in from film is not an option."

Weta, in collaboration with Epic Games, adapted a scene from the movie "The Hobbit: The Desolation of Smaug" for virtual reality, putting players in the furry feet of Bilbo Baggins as he faces the titular dragon. Equally impressive was Crytek's "Back to Dinosaur Island," which gave players a small degree of interactivity - you could knock over enormous eggs, or try to get a Tyrannosaurus rex to mimic your movements.

Neither scene, however, allowed players to move outside of the tiny space where they were planted. For that, virtual reality participants may have to rely on vehicles: cars, airplanes, spaceships and the like, instead of walking or running as they are accustomed to doing in so many video games.

New, previously unimagined experiences are coming, too, ones that will exploit the sense of isolation that virtual reality creates, rather than (perhaps fruitlessly) trying to alleviate it. "Keep Talking and Nobody Explodes," a cooperative game of bomb defusal, is one inventive example. It's an interactive version of the ticking-bomb scenario from an espionage thriller. The player wearing virtual reality goggles is faced with a countdown clock and an array of wires and buttons, while another player, in real space, furiously flips through a 23-page manual and tries to tell the player what to do.

Most virtual reality demonstrations at the Game Developers Conference aimed for the thrills of action games and films. But "Keep Talking and Nobody Explodes" is just one example of the potential for virtual reality to create sensations like tension and intimacy.

Shuhei Yoshida, the president of worldwide studios for Sony Computer Entertainment, said he was "totally relaxed" about figuring out how best to use virtual reality before Morpheus goes on sale next year. He mentioned "Summer Lesson," a demo that puts players in the role of a tutor for a Japanese schoolgirl, as an example of a new kind of experience that would prove extremely popular.

The most memorable virtual reality experience I encountered last week - and I tried more than a dozen - occurred when a developer working on a game about time traveling in search of dinosaurs decided to show me, instead, pornography.

We stopped before any virtual sex, graphic or otherwise, took place. The point was to show how the intimate aloneness and immersive sound of virtual reality - you can hear a character talking around you in digital space - is as tantalizing as the 360-degree visuals.

"Imagine Nicole Kidman whispering in your ear, 'I love you,'" the developer, Vander Caballero, said.

Trying out virtual reality for the first time - or the 50th - is jaw-dropping. Speculating about its potential for interactive storytelling is fascinating. But so far, almost no one has shown an experience that people will want to spend more than 15 minutes inside.

Until that happens - and it may happen as soon as the E3 trade show in Los Angeles in June - I'm going to regard the dawning age of virtual reality storytelling as equivalent to the prospect of Nicole Kidman whispering in my ear: a fantasy.