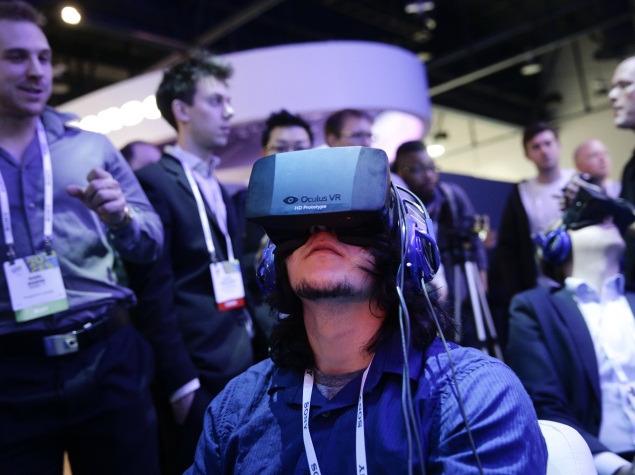 Facebook Inc will acquire two-year-old Oculus VR Inc, a maker of virtual-reality glasses for gaming, for $2 billion, buying its way into the fast-growing wearable devices arena with its first-ever hardware deal.

The acquisition, which comes hot on the heels of its $19 billion deal for messaging service WhatsApp, marks a big bet by Facebook to anticipate the next shift in an evolving technology industry, at a time when consumers are increasingly abandoning their PCs for smartphones.

(Also see: Facebook to buy WhatsApp in a $19 billion deal)

The world's largest social network was deemed late to recognize the shift to mobile devices and the company's revenue has only recently begun to recover from the late start.

Many in the industry believe that wearable devices could represent the next big platform shift. Google Inc has been testing Google Glass, a stamp-sized electronic screen mounted to a pair of eyeglasses for several years. Last week, it introduced an effort to develop computerized wristwatches.

On Tuesday, Facebook said virtual-reality technology could emerge as the next social and communications platform.

"The history of our industry is that every 10 or 15 years there's a new major computing platform, whether it's the PC, the Web or now mobile," Facebook co-founder and Chief Executive Mark Zuckerberg said in a conference call with analysts and media on Tuesday to discuss the acquisition.

"We're making a long-term bet that immersive, virtual and augmented reality will become a part of people's daily life," the 29-year-old Zuckerberg said, noting that wearing the Oculus goggles was "different than anything I've ever experienced in my life."

Zuckerberg said Facebook was not interested in becoming a hardware company and did not intend to try to make a profit from sales of the devices over the long term. Instead, he said Facebook's software and services would continue to serve as the company's underlying business, potentially generating revenue on Oculus devices through everything from advertising to sales of virtual goods.

While Oculus will operate as an independent company, Zuckerberg stressed that Facebook's plans for Oculus extended well beyond games.

"Imagine enjoying a court side seat at a game, studying in a classroom of students and teachers all over the world or consulting with a doctor face-to-face - just by putting on goggles in your home," he said.

In addition to game makers, Oculus has garnered some interest from developers keen on creating apps in areas like architecture, automobiles, marketing and education, the company has said.

Shares of Facebook, which have risen 25 percent in the past six months, were down nearly 1 percent at $64.36 in late trading on Tuesday.

Facebook's recent spate of acquisitions is somewhat concerning, RBC Capital Markets analyst Mark Mahaney wrote in a note to investors on Tuesday. But he said that for a company of Facebook's size, the deal did not seem "irrational."

"The question this time is whether Facebook is too early or simply betting on the wrong platform. This won't be known for some time. But if it gets the platform right, we're relatively confident that Facebook will develop an effective monetization strategy for it, thus boosting its overall financial growth," Mahaney said.

Happy go luckey
The acquisition makes Oculus VR one of the most successful companies or projects to ever emerge from the fledgling Kickstarter program, which has helped attract small investments from the public for everything from the Pebble smartwatch to the recent "Veronica Mars" movie.

Oculus VR, founded by Palmer Luckey, a self-described virtual-reality enthusiast and hardware geek, got its start as a Kickstarter-funded program, drawing small investments from thousands of people on the popular fund-raising platform.

It quickly drew attention to its "Oculus Rift" virtual-reality glasses, demoed at tech and gaming conventions around the country.

Oculus VR raised $75 million in December in a round led by Andreessen Horowitz, to market its virtual-reality headset for video games and develop the product for use in areas like education, film, architecture and design. Andreessen Horowitz partner Marc Andreessen, who is also on Facebook's board, said in a tweet on Tuesday that he was recused "on both sides" of the Facebook Oculus deal.

Other venture capital backers included Spark Capital, Formation 8 and Matrix Partners. Oculus now employs more than 100 people and has distributed some 75,000 software development kits for Oculus Rift to game developers and others.

It recently began taking orders for new software development kits with better graphics and features to reduce motion sickness - a frequent complaint of the old prototype - slated to ship in July for $350 apiece.

Oculus plans to produce commercial versions of its virtual-reality glasses, called Oculus Rift, which users mount on their heads with a strap. It also hopes to take its technology beyond gaming.

"Virtual reality creates a canvas that is much richer than anything we've seen in computing so far," Antonio Rodriguez, Oculus board member and general partner at Matrix Partners said in an interview with Reuters on Tuesday.

He said virtual reality presents an opportunity to re-imagine various tasks and social interactions in areas like medicine and education.

So far, "people have done all sort of apps (outside gaming) like body switching apps, where two bodies are scanned and you can switch identities.

Last week, Sony unveiled a prototype for a new virtual-reality headset accessory for its Playstation 4 games console at the annual Game Developers Conference in San Francisco. The headset, still in development under the name "Project Morpheus", is designed to provide an immersive experience for gamers and is poised to compete with Oculus' Rift once both devices are on the market.

Deal spree
The deal, which Facebook said is expected to close in the second quarter, marks the company's second multi-billion dollar acquisition since mid-February.

Zuckerberg said on the call the two deals involved "incredibly rare companies" and that Facebook was unlikely to continue making big acquisitions at a similar pace.

Finance Chief David Ebersman said the price of the deal was based primarily on the gaming business, but that Facebook believed the technology could be worth "multiples" of the purchase price if Facebook succeeds in extending it into other areas such as entertainment and communications.