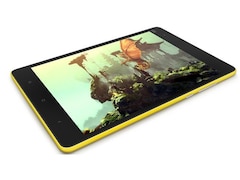 After taking the smartphone world by storm, Xiaomi is trying to repeat its success where tablets are concerned. We've been almost universally impressed by what the Chinese company has managed to produce given the prices it charges, and the rest of the industry has had to scramble to match this new competitive force. As customers and compulsive bargain hunters ourselves, Xiaomi has brought nothing but good news this past year.Recent launches haven't had as much of an impact as the first few did, but that's set to change again with the new Xiaomi Mi Pad. While there are plenty of Android tablets in this price range already, the company is promising high-end features and the kind of quality that competitors do not deliver. Apple, in particular, stands out as the prime target - not the horde Android manufacturers offering oversized phones.

Xiaomi’s first tablet blows away everything else in this price range in terms of raw performance and screen quality, and is competitive with the iPad mini 2 and 3, which are priced much higher. In terms of value for money, it’s really hard to beat the Mi Pad. However it does have a few rough edges. The software is lacking in terms of functionality and the rear gets uncomfortably hot when playing games or running heavy apps. The battery life is a plus, but don’t expect great images with these cameras. The biggest dealbreaker for some will be the lack of any option for cellular data.