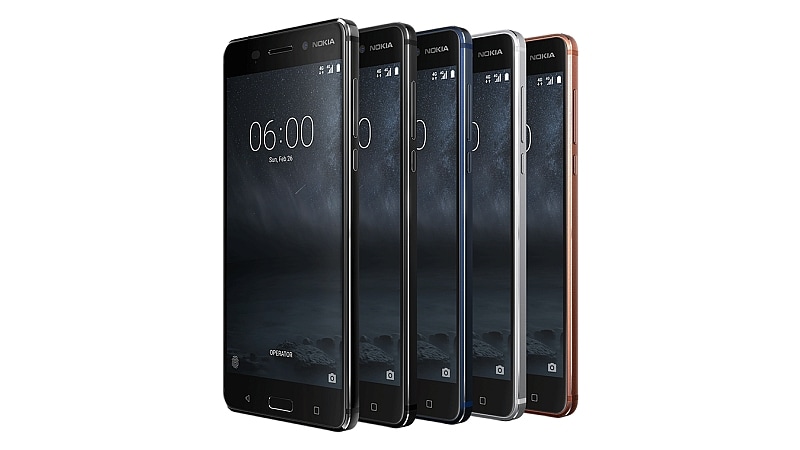 Nokia is all set to launch the Nokia 3, 5 and 6 in India. HMD Global on Friday sent out press invites for a Nokia event in India on June 13. These three phones were launched globally in Barcelona earlier this year. The Nokia 6 and the Nokia 5 are powered by octa core Snapdragon 430 processor, have fingerprint scanners below the display. The Nokia 6 has 3GB RAM with 32GB of storage while the Nokia 5 has 2GB of RAM and 16GB of storage. The Nokia 3 is a budget handset, it is smaller in size and sadly misses out on a fingerprint sensor. It is powered by a 1.3GHz quad-core MediaTek 6737 SoC, 16GB internal storage, and runs on Android Nougat. All three phones have MicroUSB port for charging and syncing, NFC, 4G with VoLTE support and near stock Android.

Moto C with 4G VoLTE support launched in India; Moto G5 and Moto G5 Plus now available via offline retailers in India
Lenovo brand Moto launched the Moto C in India today for a price of Rs 5,999, and it will be available at leading offline retailers across over 100 cities in India. It will be available in Pearl White and Starry Black colour variants in India. The Moto C runs on Android 7.0 Nougat, features a 5-inch display and is powered by a 1.1GHz MediaTek MT6737M quad-core processor with 1GB of RAM. There is 16GB of internal storage that is expandable via microSD card (up to 32GB). The Moto C camera sports a 5-megapixel rear sensor and a 2-megapixel selfie shooter.It sports a 2350mAh removable battery and has a microUSB port at the bottom. The Moto C is a dual SIM 4G phone with VoLTE support.

Moto also announced that the Moto G5 and Moto G5 Plus will reach an offline stores. Gadgets 360 has learnt from sources that offline retailers have received stocks of the two phones as well, making them now available online as well as offline. We reached out to Lenovo for a statement regarding the move, and were informed the phones are in stock with select retailers across the country. The Moto G5 Plus was a Flipkart exclusive while the Moto G5 was exclusive to Amazon.

OnePlus 5 teased to be more compact than 3T, pricing information tipped
OnePlus recently asked its users to choose the box design for its upcoming OnePlus 5 smartphone, it has now given users something more to talk about. After revealing that the OnePlus 5 will be "the slimmest flagship", the company has released a teaser image with a strong hint regarding the form factor of the smartphone. Pan Jiutang, a noted analyst has shared his estimates regarding the pricing of OnePlus 5 to be around CNY 3,000 (roughly Rs. 28,300).

OnePlus 5 is expected to launch soon and will sport a Qualcomm Snapdragon 835 SoC, bear a front-facing fingerprint sensor, and feature a camera developed in partnership with DxO. The company also teased a camera sample showing excellent low light performance.

The Nubia Z17 features a 5.5-inch full-HD display, and features a dual camera setup with a 23-megapixel and 13-megapixel lens at the back and a 16-megapixel camera at the front. It packs a 3200mAh battery. The all metal Nubia Z17 has no bezels and will be available in Aurora Blue, Black Gold, Obsidian Black, Solar Gold, and Flame Red.

OneLogin password manager reports data breach, potential decryption of customer data
Personal data on the Internet is not as safe as it used to be. OneLogin, a password manager and single sign-on service, is the latest to company to join the list of data breach victims. The company reported an "unauthorised access to OneLogin data in our US data region." on Wednesday. OneLogin has been unclear as to the nature of the attack, claiming to have found a threat actor who had "obtained access to a set of Amazon Web Services (AWS) keys and used them to access the AWS API from an intermediate host with another, smaller service provider in the US."

The severity of the breach to consumers is not yet known but the company has stated that the hack allowed the threat actor to access database tables that contain personal information about users, apps, and various types of keys. While the company maintains that it encrypts certain sensitive data, it didn't rule out the possibility that the 'malicious actor' had the ability to decrypt them.

The three playable characters are Tyler the Racer, Mac the Showman, and Jess the Wheelman - ostensibly named to signify what kind of racing they specialise in. With the objective of rising up the ranks of the underground racing scene, there's a focus on car customisation and personalisation that EA claims is "the deepest customisation from the series". Also, like previous EA titles in India, it will be exclusive to Amazon for the PS4 and Xbox One. Despite a PC version being in the works, it will be available via EA's Origin digital distribution service.

SpaceX ISS cargo launch postponed to Saturday after lightning strike
A lightning strike near Cape Canaveral forced SpaceX to delay its first-ever cargo delivery to astronauts utilising a reused rocked. The lightning did not hit any of SpaceX's equipment but happened within 10 miles (16 kilometres) of the launch pad. The strike happened about 25 minutes before the scheduled launch at 5:55pm (2155 GMT). "The lightning flight rule requires 30 minutes for you to clear that before it is safe to launch," NASA spokesman Mike Curie said. The next opportunity for SpaceX's resupply mission is 5:07pm (2107 GMT) on Saturday (2:37am IST Sunday), and will be broadcasted live on NASA's website.

The gumdrop-shaped Dragon spaceship has been refurbished, after previously toting food and supplies to the International Space Station in September 2014, and then splashing back down in the ocean intact. Separately, SpaceX and Tesla CEO Elon Musk announced his exit from the advisory council of US President Donald Trump, after the latter declared the withdrawal of the US from the Paris Accord for climate change.

Xbox Game Pass goes live; lets you play over 100 Xbox Games at Rs. 699 a month
Microsoft on Thursday finally released the Xbox Game Pass for Xbox One globally. Game Pass is a Netflix-style subscription service and will give you unlimited access to 100 Xbox 360 and Xbox One titles at $10 per month (Rs. 699 in India). The service was first announced earlier this year and has been available to Xbox Live Gold members for a week now.

Microsoft is also offering a 14-day free trial for Xbox One users before going for the paid subscription. Additionally, Xbox Game Pass members will also receive exclusive discounts for games and DLC for Xbox One games included in Xbox Game Pass.

Chrome to get native ad-blocking in early 2018; Google joins Coalition for Better Ads
Google has confirmed that it is planning to introduce native ad-blocking to Chrome browser from early next year. The tech giant also announced that it has joined Coalition for Better Ads, an industry group dedicated to improving online ads. Instead of native ad-blocking, the new feature could be seen as native "ad-filtering" as the search giant will only be removing the ads on the Internet that are non-compliant with 'Better Ads Standards'. Notably, Google has clarified that it will also be filtering out ads served or owned by the search giant itself if they are found to be beneath the Better Ads Standard.

Facebook albums revamped, now let you collaborate, add check-ins and posts
Facebook is already updating its albums with new features and abilities to make it more interactive and a richer source to go down memory lane. In addition to adding photos and videos to albums, you can now also add status updates, posts, and check-ins for a fuller nostalgic experience when you come back to visit the album later, making it a sort of scrapbook to look back on.

You can also invite friends to add photos and updates to the album. This will allow them to add photos, videos, and posts to the same album for a collaborative effort of creating and keeping a memory stored online forever. The update is rolling out to Android and Web starting today, and is coming soon to iOS users. The report also shared all the features coming with the albums update, and another new feature listed was called Featured Albums. Facebook now has an option to let people showcase their favourite albums right on their Profile, if they want to.

Microsoft Skype redesigned with inspiration from Snapchat
Skype on Thursday announced a major redesign of its mobile app, including a 'Highlights' feature that lets users snap photos and videos that will be temporarily visible to their connections. This feature carries a strong resemblance to Snapchat's 'Stories.' The format has been growing in popularity within social and messaging services and has recently been incorporated in WhatsApp and Instagram.

Besides Highlights, the new Skype puts an emphasis on group messaging. Users can react to one another using emoji, they can send messages on top of attractive and colourful backgrounds or they can infuse a chat with content from third-party services, such as animated images from Giphy. The service also features a variety of bots made by Microsoft with the purpose of helping users get more done. This includes Scoop, a bot that can fetch news of interest to an individual, and Cortana, Microsoft's virtual assistant.