Uber vs Ola in India: How Do They Stack Up? 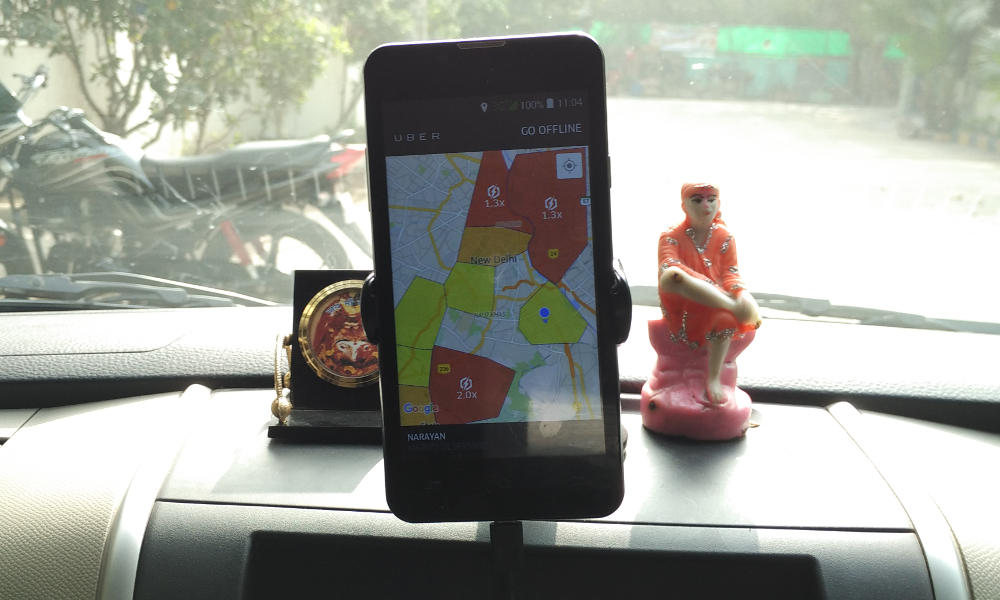 It's hard to believe that a company whose only product is an app on your phone that calls taxis it doesn't even own, is valued at $62.5 billion (approximately Rs. 4,19,562.5 crores). Uber's business model depends on being the middleman between the taxi driver and the rider, and managing transactions on the app. Doing this, Uber has scaled globally to 67 countries and 360 cities, taking on governments and taxi unions around the world, and completing a billion rides by the end of 2015.

Uber's playbook hasn't seen it take a position of dominance in India, where Ola is providing real competition. Here's how the two companies stack up against each other.

By the numbers
There are a number of different things to consider when comparing the two companies. The number of cars, the fares they offer, and of course, the number of customers on both platforms shows the difference between the two.

What's on your phone?
App install data seems to indicate that Ola has the lead in India. The Ola app has been downloaded more than twice as much as Uber, according to a survey by WhichApp, based on app data of over 90,000 Android users from India.

According to Quettra's Asia data, which tracks installs on Android devices, Ola Cabs app installs lead Uber four to one as of the end of May 2015. Ola says it has over 25 million customers in India, as of October 2015.

The gap in iOS app installs might be smaller, or even skewed in the other direction, but according to Statista data for December, Android has a 64.32 percent share of the Indian market, while iOS is a mere 1.82 percent, so this gives a fairly clear picture of which app has been downloaded more in India. 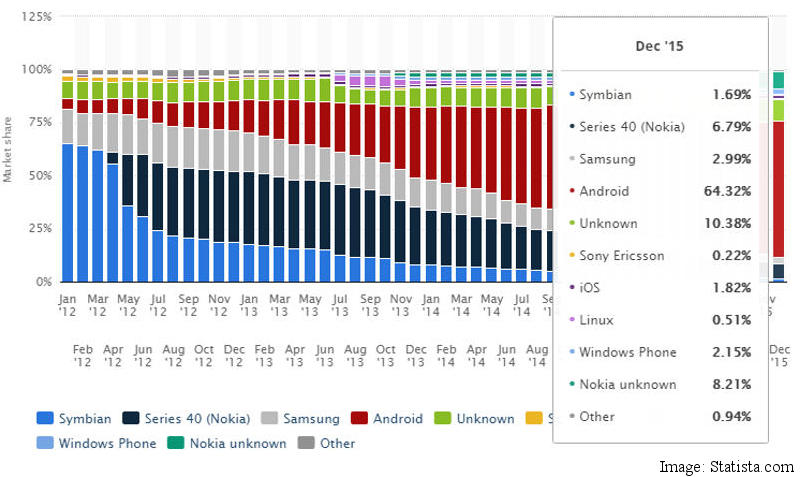 "Immense availability and a wide range of mobility options for different use cases makes us the most preferred platform for millions," says Anand Subramanian, Senior Director, Marketing Communications at Ola. Ola also remarked that WhichApp's survey data does not track install data on TaxiForSure's app - Ola acquired TaxiForSure in March 2015, adding the cars and users from that service to its own platform.

We also asked Uber to confirm the details about app installs, and although the company stated that it could not share specific data, it did not contradict the figures we shared. Instead, Uber shared information from app analytics platform Similarweb that compares the current install rates for the two apps. This data shows that in terms of the number of new users added each month, the two apps are closer - Ola still has a lead, but it was ahead by 7.5 percent in July 2015, and is leading by 6.74 percent in current app installs in 2015. Another data point from the report shows that Ola's active users have decreased 12 percent while Uber's have gone up by 3 percent in the same period - however, none of the data that Uber has shared actually contradicts the numbers we're seeing, since it doesn't include the base figure being used to calculate the percentages.

Who's got the cars?
Uber began its India operations in 2013, and currently has over 200 full time employees, and plans to invest $1 billion (Rs. 6,808 crores) in India by 2016, the company stated in an email. Uber says it has over 250,000 driver partners on its platform, and is available in 26 cities - its latest launches were in Ajmer, Jodhpur, Mangalore and Udaipur. Uber had added autos, to its app in April, but removed them in December. Ola claims to have one lakh more vehicles available via its app. Ola says that it has a fleet of 350,000 vehicles, include government-licensed taxis and auto-rickshaws.

Founded in Jan 2011 by IIT Bombay alumni Bhavish Aggarwal and Ankit Bhati, Ola says it is presently operational in 102 cities, and it claimed a growth rate of 30 times in 2015. It also says it received one million booking requests a day in October 2015.

Although Ola's reach appears to be a lot bigger than Uber's, it's worth pointing out that the actual experience in smaller towns can be a little different than using the service in cities - on a recent trip to Lucknow, we saw wait times of over 30 minutes at all times, and had multiple trips cancelled by drivers who said we were too far away. This makes sense when you consider that its fleet of taxis is, at best, 30 percent bigger than Uber's (and probably less than that), but it's covering nearly five times as many cities. 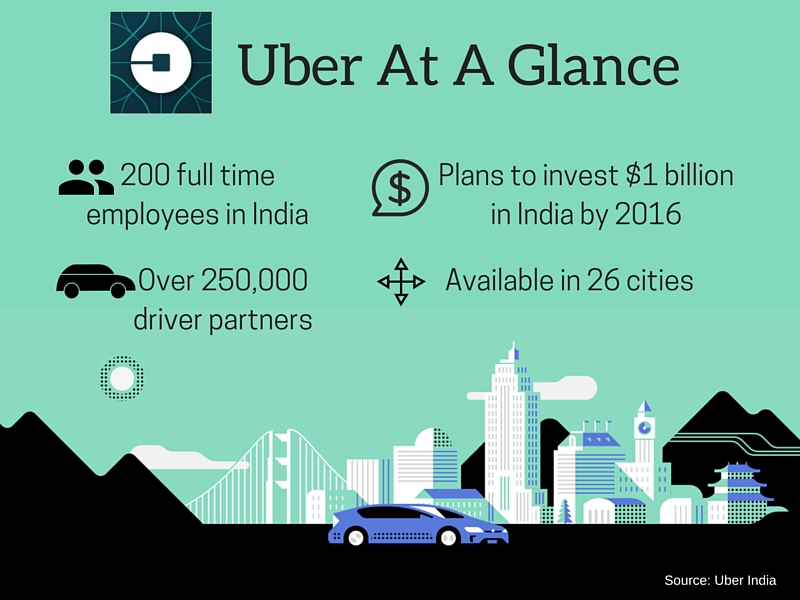 Who's got cheaper fares?
Uber Founder Travis Kalanick, while addressing a session at Start Up India event in New Delhi last month said that Uber had started out as a private beta with high-end Mercedes cars, but then shifted its focus to low-cost rides. "What we found is that low cost means that lots of people can use it. Lots of people using it, means lots of cars. Lots of cars mean low pickup times, and also means reliable pickups in a bigger area," he said. "It also means, for the driver, that they can make more money, because where they drop you off, they're more likely to get a trip back. We found that the cheaper products were actually more luxurious." How does this stack with the prices you see on your app?

While comparing both their offerings, there are a few differences that you should keep in mind. Ola lets users make advanced bookings with the Ride Later option, while Uber does not. Uber has a cancellation free, Ola does not. Both services have a per-minute charge as well, which varies from Rs. 1 to Rs. 2.5 depending on the car's category. Ola's per-minute ride-time tariffs only start ticking five minutes after the ride in some cities, according to the tariff charts.

Apart from this, in Hyderabad and Bengaluru, Ola levies an 'Airport rate' that has a much higher fare and minimum bill amount, which can prove costlier than radio taxis, based on surge pricing. Both companies have launched ride sharing services and private carpooling services in Delhi. Ola plans to launch Ola Share in 20 cities across the country over the next six months.

(Also read:Could Carpooling Be the Future for Uber, Ola and Others?)

A quick analysis of all the fleets, (which range from hatchbacks to sedans, to luxury sedans and SUVs,) operating in the Indian metros reveals that the lowest minimum fare for a cab is in Kolkata, where an UberGo starts at Rs. 45. At the time of writing, UberGo had a per kilometre charge of Rs. 6 in Chennai, Rs. 7 in Bengaluru, Delhi, Hyderabad, and Kolkata, and Rs. 8 in Mumbai. On the other hand, an Ola Mini costs Rs. 10 per kilometre in Bengaluru, Hyderabad, and Chennai, and Rs. 11 per kilometre in Mumbai. The only city where it is cheaper is in Kolkata, where it costs Rs. 7 per kilometre.

In Delhi, an Ola Mini costs Rs. 8 per kilometre, with a minimum fare of Rs. 100 for the first four kilometres, while an UberGo has a minimum fare of Rs. 60. Generally speaking, it appears that UberGo is likely to be the cheapest on your wallet, barring any surge pricing. Predicting which app will have higher surge rates at any point in time is something that's worthy of a PhD thesis. 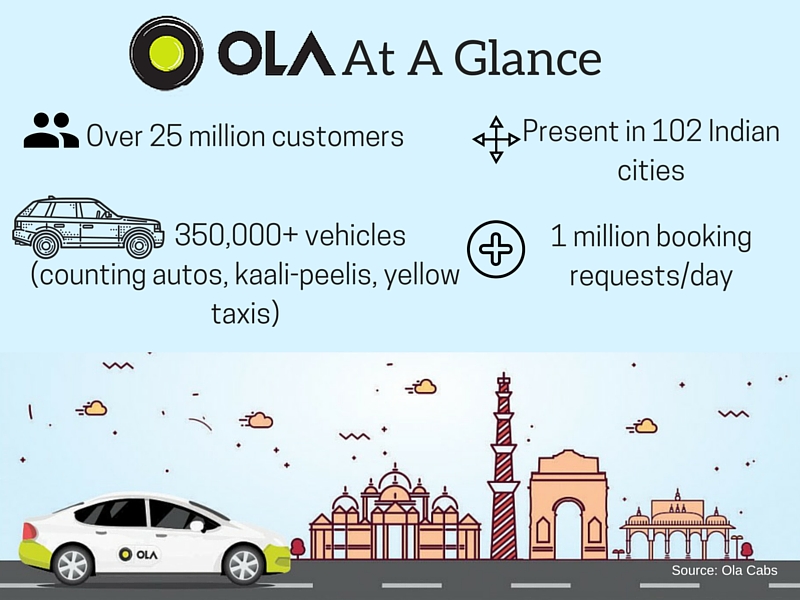 A global presence
While Uber's global presence might make the app more appealing for frequent travellers, Ola is making headway internationally - partnerships are forming between Uber's rivals, to challenge it globally.

According to a Bloomberg report, Uber lost $1.7 billion (approximately Rs. 11,500 crore) despite earning $1.2 billion (approximately 8170 crore) in revenue over the first three quarters of 2015. It's biggest competition is China's Didi Kuaidi, which completed 1.4 billion rides a year, and invested in Ola in September 2015.

In December, Ola inked a pact with Didi, and also with Uber's biggest competitor in the US, Lyft, allowing users to seamlessly travel across China, US and Southeast Asia. Partner products are expected to roll out early this year.

In response, Uber has experimented with many India-specific features, such as cash payments in May 2015, and Uber Auto, which was shunted in late 2015 after being tested in New Delhi.

The sum of it all
It's quite likely that the market won't be entirely sewn up entirely by these two - Chandigarh-based Jugnoo, an auto rickshaw aggregator sees itself as a flying cockroach, an evolutionary adaptation for surviving against heavily capitalised unicorns. Mumbai's state-licensed taxis will soon be available to book on an their very own app, while bike taxis operators like Baxi and M-Taxi have started operations in Gurgaon with app-based offerings of their own.

In terms of app installs, and total fleet size Ola is the clear winner. It's also present in many more cities, and features such as rickshaws and scheduled rides could make it more useful too. However, all this also means it's stretched thin in comparison to Uber; a problem that many Indian startups are coming to terms with now.

While data seems to indicate that Ola is presently in a leading position in India, it's too early to declare a winner, says Amit Somani, Managing Partner at Prime Venture Partners.

"India for Uber is as important as India is for Amazon, because outside of China, this is the biggest market in the world. They cannot afford to lose India, they have deep pockets and can they have the ability to raise money," he says. "I don't think they're going to lose that easily. It's going to be a tough two-leg race. Ola may be ahead for now, but I don't think the game is over by any stretch of the imagination."