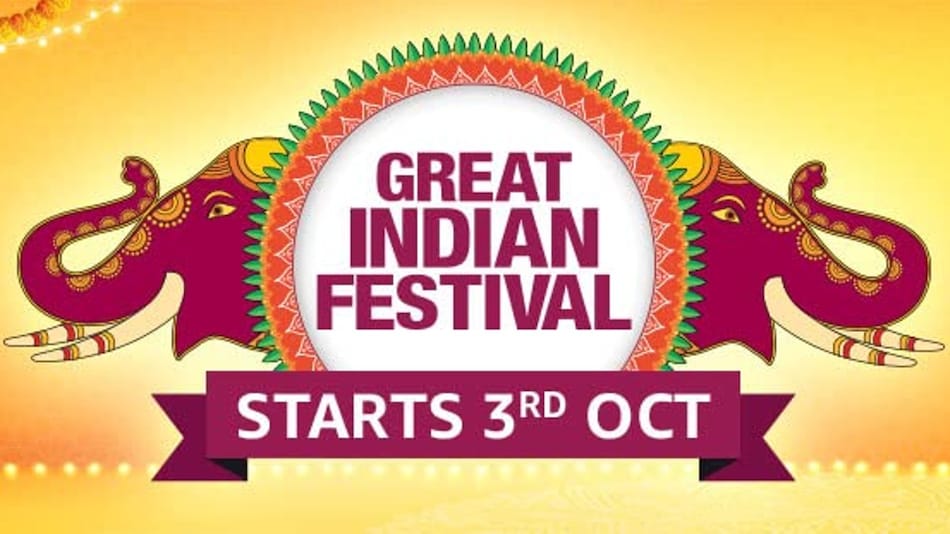 Amazon Great Indian Festival 2021 dates are now official, and the festive season sale will begin on October 3. Amazon is offering discounts on gadgets, cashback, exchange offers, no-cost EMI offers and more. The US e-commerce giant announced the launch of this year's Great Indian Festival sale through a virtual press conference. Just like last year, the online sale will run throughout the entire month of festivals in the country. Prime members will be given early access to deals and discounts available during the sale. Earlier this week, Amazon rival Flipkart announced that it is hosting its Big Billion Days 2021 sale starting October 7.

To attract customers during the Great Indian Festival sale, Amazon has created a dedicated webpage that indicates discounts on various mobile phone models and accessories, electronic devices such as smartwatches, tablets, and laptops, and home appliances including smart TVs. The Amazon sale is also claimed to offer its Echo, Fire TV, and Kindle devices at the lowest prices of the year. Further, there will be multiple Alexa smart home combo offers to expand the user base of the voice assistant in the country.

In addition to deals, discounts, and offers, there will be over 1,000 new product launches from brands such as Apple, Asus, Fossil, HP, Lenovo, OnePlus, Samsung, Sony, and Xiaomi. There will also be new launches around Sony's PS5 and Microsoft's Xbox, Amazon revealed through a statement.

Amazon Pay is also touted to allow customers to save up to Rs. 5,000 during the Great Indian Festival sale by making payments of their utility bills, booking tickets, and sending money.

Customers who have joined Amazon Prime membership will get early access to the Great Indian Festival sale. There will also be additional cashback offers, extended no-cost EMI options, and additional warranties — that all will be available during special Prime Fridays.

Citing a survey conducted by market measurement firm Nielsen, Amazon India Vice President Manish Tiwary at the press conference said that more than 78 percent of its sellers are expected to reach out to new customers during this festive season in the country. As many as 71 percent of the surveyed sellers are also looking forward to increasing their sales during the season, he added.

Amazon recently expanded its language support to Bengali and Marathi to help sellers reach new customers. These languages are in addition to the existing Hindi, Kannada, Malayalam, Tamil, and Telugu. The company is also updating its voice shopping experience by adding Hindi support in the coming future.

Unlike Flipkart that is hosting its Big Billion Days sale this year as a six-day event, Amazon is hosting the Great Indian Festival 2021 as a month-long sale. This could be similar to how the company conducted multiple sale rounds last year.

“If you look at how customers celebrate this festive season, it's not about Diwali, it starts with Dussehra, Navratri, and continues through the month, and in sync with it, the Great Indian Festival also will be a month-long festival,” said Tiwary. “So, customers can actually enjoy a month-long celebration and access great everyday deals from some of the biggest Indian and international brands, and a vast selection from our small sellers.”

Amazon sees mobile phones, consumer electronics, laptops, and home entertainment as well as grocery as some of the product categories to get significant traction during the festive sale.

Update: All dates in the article have been changed from October 4 to October 3. Amazon announced October 4 earlier in the week, and then contacted Gadgets 360 with the new date. Amazon's full statement on the date change is below:

Our top priority remains customer trust and the interest of our sellers, especially the lakhs of small sellers and the tens of thousands of local shop owners across India. We continue to innovate for our partners, small businesses and customers, as they gear up for the upcoming festive season. The Amazon Great Indian Festival will now start from Oct 3, 2021 and as always, Prime members will have early access.

Snoop Dogg Reveals He Is an NFT Whale With Collectibles Worth Over $17 Million
Chinese Gaming Firms Vow Self-Regulation, Possible Use of Facial Recognition Amid Crackdown on Teen Addiction