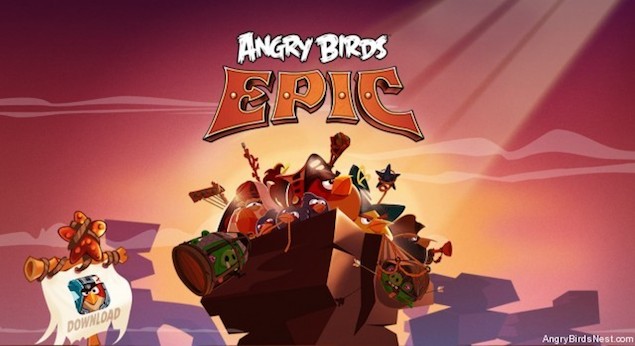 Just a few days after Rovio released a teaser trailer for a new Angry Birds game, there is more news to follow. New reports, replete with screenshots, indicate the game will be called Angry Birds Epic, and be a narrative-based, turn-based strategy role-playing game.

If true, Angry Birds Epic would be a breakaway from the regular bird-flinging gameplay that users have been accustomed to playing. The new trailer that had debuted on Saturday, showed the red bird in a knight's armour with the word 'Epic' being prominently highlighted.

The game was announced for a soft launch first in Australia and Canada in the teaser trailer, possibly to test out the in-app purchase system for the free-to-play game. No availability details have been mentioned however.

The report on Angrybirdsnest, and the alleged leaked screenshots, indicates the game will allow players to craft 'epic weapons' like wooden swords and pans. 'Epic upgrades' will apparently involve upgrading characters, armour, weapons and potions.

The 'epic upgrades' and 'epic weapons' can supposedly be crafted in the game itself, or if a player wishes to speed up the process, they can purchase it from the in-game app purchases. Given that the Angry Birds franchise is known to have in-app game purchases valuing up to $100 (roughly Rs. 6,100) it could be anyone's guess as to how expensive it would be in the 'Epic' instalment.

The 'epic battles', the report claims, will be 'easy to play, but difficult to master'. Angry Birds Epic is said to take place on the fictitious Piggy Island, will have 'epic worlds', which include villages, mountains, beaches and caves.

Other reports suggest that the game could also tie-in to the Angry Birds cartoon. Of the birds that are said to be playable characters in Angry Birds Epic, the red bird will be the Knight class, while the yellow bird will be the Mage. There are no other details on any of the other birds.

As far as the Finnish game maker is concerned, the timeline for the next two years looks a busy one. An upcoming game in the Angry Birds stable is Angry Birds Stella: Best Friends Forever, which is slated for a soft launch this Fall in Canada, Australia and New Zealand.

There is a Special Angry Birds Friends "Bomb Tournament" coming in the next week, the Angry Birds GO! Sub-Zero update is coming soon this year, apart from a multiplayer update (sans the Sub Zero update) is also expected this year.

In addition Angry Birds GO! Transformer - Telepods will release in September in the UK. A comic book by IDW is slated to hit stores in June this year and Angry Birds- The Movie will release on July 1, 2016.

Update: Rovio has confirmed Angry Birds Epic will soft launch in Australia and Canada by the end of the week, on the iOS platform. It will launch globally on Android, iOS, and Windows Phone 8 some time later this year.