FaceApp, the Viral Photo Editing App, Seems to Be Blocking Users From India

If you are desperate to use that old-age filter app, you’ll need to do it via a VPN. 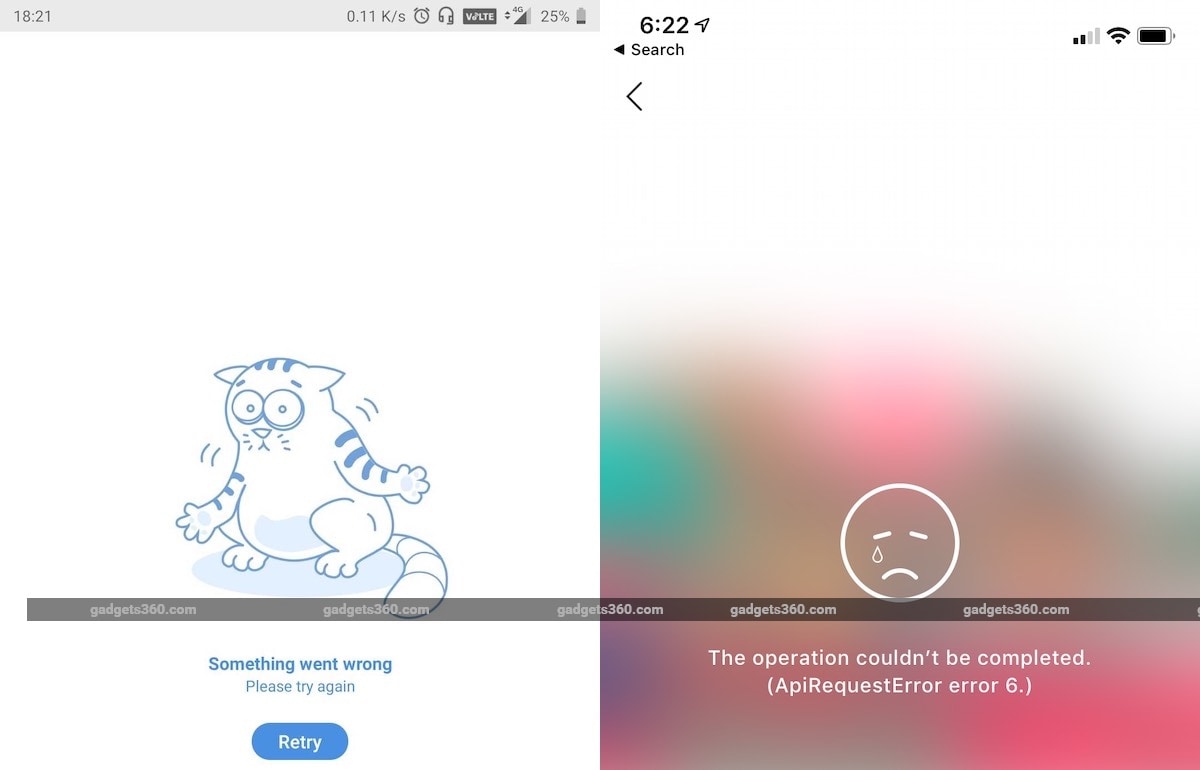 Trying to use FaceApp from India? These are the errors you might run into on Android (left) and iOS

FaceApp, the photo editing app with age filters that have made the app viral virtually overnight, seems to be now blocking users from India. The app is still available for to download for Android and iOS respectively from Google Play and Apple's App Store, but trying to use FaceApp from India now leads to error. The FaceApp block was reported by users on Twitter and confirmed independently by Gadgets 360. We've reached out to the company behind the app for a comment on the development, and will update this story as and when we hear from them.

If you are on Android and trying to use FaceApp from India, you might now be greeted with an error "Something went wrong, Please try again". iOS users are getting a more cryptic "ApiRequestError error 6 - Operation couldn't be completed" message. The problem was first reported by some Twitter users, and confirmed by Gadgets 360, as seen in the screenshots above.

FaceApp, which uses AI to apply various effects to your face, including the viral old-age filter, has been trending the last few days, catapulting the app to the top spot as the #1 free app in Apple's App Store, and the top three in Google Play at the time of filing this report. Everyone and their grandmother, it seems, has been posting their FaceApp-ed portrait to social media, not too dissimilar to the Prisma-craze from almost exactly three years ago.

The app's rise in popularity has not been without its share of controversies, with some points in its terms of service raising concerns.

"You grant FaceApp a perpetual, irrevocable, nonexclusive, royalty-free, worldwide, fully-paid, transferable sub-licensable license to use, reproduce, modify, adapt, publish, translate, create derivative works from, distribute, publicly perform, and display your User Content and any name, username or likeness provided in connection with your User Content in all media formats and channels now known or later developed, without compensation to you," one of the terms reads.

So, unless you are comfortable with FaceApp's terms as well as privacy policy, you might want to stay away from the app. It is, however, important to note here that FaceApp is hardly the first app to have terms and conditions like this as such language can often be found in other social media apps and websites. Still, it is good to keep in mind that user data is the biggest asset of an online service and it can be sold and transferred to generate revenue.

Meanwhile, FaceApp has caught the eye of US senators who are now asking FBI and FTC to investigate the app and its Russia links.

This is notably not the first time when FaceApp has been embroiled in a controversy. Back in 2017, it had raised eyebrows for enabling users to change their ethnicity. After the controversy, FaceApp developers removed the controversial filter that was designed to change the skin tone and facial features of users to match a certain ethnicity.

In a separate issue in 2017, FaceApp was found to have a dedicated "hot" filter that looked to "lighten" the skin tone of users. The racist filter was removed after it sparked outrage among many users.