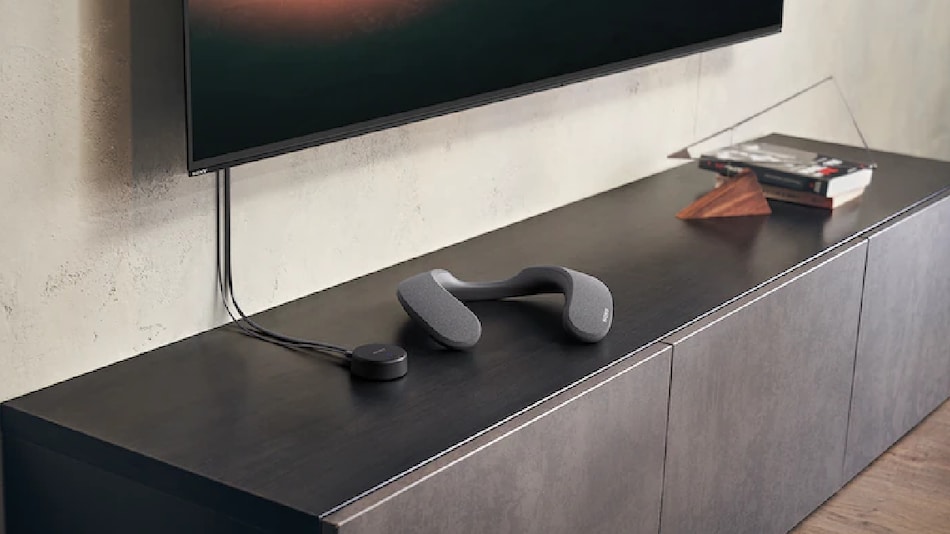 Sony SRS-NS7 wireless neckband speaker has been launched in the US with Dolby Atmos support. The latest model in Sony's wireless neckband series is compatible with WLA-NS7 transmitter to offer Sony's signature 360 Spatial Sound experience with Sony Bravia XR TVs. The 360 Spatial Sound Personalizer app, after being paired with the SRS-NS7 wireless neckband speaker and Sony Bravia XR TV, estimates the 3D shape of the user's ear and optimises the arrangement of virtual Dolby Atmos speakers for them. The neckband is splash proof and said to deliver up to 12 hours of battery life.

Sony SRS-NS7 wireless neckband speaker is priced at $299.99 (roughly Rs. 22,300) and is available for pre-booking via Sony Electronics, Best Buy, and Amazon. The neckband will start shipping on October 20. However, Sony has not shared any information on its international availability yet.

The Sony WLA-NS7 wireless transmitter can be purchased separately. It comes with a price tag of $59.99 (roughly Rs. 4,400) and is available to pre-order at Sony Electronics, Best Buy, and Amazon.

Sony SRS-NS7 features an inbuilt microphone and comes with support for Sony's 360 Spatial Sound to deliver a cinematic experience with the 360 Spatial Sound Personalizer app. It has integrated hands-free calling and comes with upward-facing X-balanced speaker units that deliver sound directly to the user without disturbing others. With a fabric surface and Silicone neckband, the ergonomic design ensures comfort fit around the neck and there are passive radiators that boost bass. The Play or Call button is placed on the left side of the neckband. Sony claims that the SRS-NS7 is the world's first wireless neckband speaker that delivers Dolby Atmos when paired with Sony's Bravia XR television models.

It comes with a wireless adapter and has a multi-point connection that allows users to connect two devices at the same time. The company has given an IPX4 splash-resistant design to Sony SRS-NS7.

Sony SRS-NS7 wireless neckband speaker is claimed by the company to operate for 12 hours and up to 5 hours at maximum volume on a single charge. Sony says a 10-minute quick charge can add one hour of extra playtime.

Amazon's month-long sale, the Great Indian Festival, is back. This week on Orbital, the Gadgets 360 podcast, Amazon India's consumer electronics head Akshay Ahuja takes us behind the scenes. Orbital is available on Spotify, Gaana, JioSaavn, Google Podcasts, Apple Podcasts, Amazon Music and wherever you get your podcasts.
Affiliate links may be automatically generated - see our ethics statement for details.