Is this business-focused ANC headset worth Rs. 30,000? 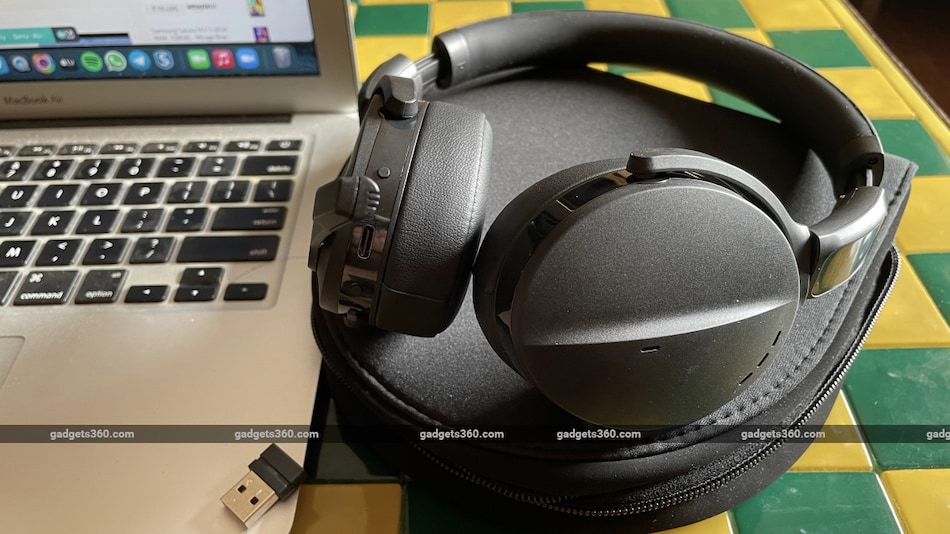 For a lot of us, the pandemic has meant working from home, and this situation is continuing well into 2021. An integral part of a lot of our jobs is attending online meetings and video conferences. However, this involves being able to hear and speak clearly; you need a good pair of headphones for this. Most headphones today are focused more on the music experience, and business-friendly options for voice communications are considerably less common, particularly in India.

That changed with Epos, a Danish enterprise and gaming focused audio brand, launching in India. One of the company's first products is the Epos Adapt 560, a pair of wireless headphones that is focused on voice communications and co-developed with Sennheiser. Priced at Rs. 29,990, this is an expensive pair of headphones, especially given that it's made for a very specific use case. Does it deliver enough by way of features to justify the price? Find out in our review.

Foldable boom microphone and ANC on the Epos Adapt 560

While the price would suggest that you're buying over-ear headphones, the Epos Adapt 560 has an on-ear design that's typically seen on more affordable models. There's also active noise cancellation, which typically benefits from the better noise isolation of over-ear fit headphones, so the design does come across as a bit odd, everything considered. The Adapt 560 is comfortable thanks to soft padding and its low weight, but I wasn't too impressed with its ability to isolate background noise.

The headphones have been co-developed with German specialist brand Sennheiser. You can see its logos right below the Epos logos on both sides of the headband, and indeed Sennheiser's distinct styling and ergonomics are evident in the headset itself. However, this is an entirely plastic headset, and looks far too basic given the Rs. 29,990 price tag.

The Epos Adapt 560 has all its controls and ports along the bottom of the right ear cup. There is a sliding button to control playback and volume, a dedicated button for answering calls, the power button, a dedicated button for ANC, and a USB Type-C port for charging and wired use. I found all of them a bit hard to manage at times. Even after a few days of use, my muscle memory still wasn't trained to find the right button when I needed it.

Unlike most regular music-focused headphones that have microphones within the ear cups, the Epos Adapt 560 has a foldable boom microphone that extends outwards when needed, and can be stowed away almost flush with the ear cup when not in use. It's plastic like the rest of the headset, and clicks into place when stowed. This promises to make voice pickup clearer and more accurate, and I'll get into the actual performance of the microphone a bit later in this review.

Connectivity is through Bluetooth 5 for smartphones and tablets. The sales package also includes an Epos BTD 800 USB dongle for devices such as computers and laptops that might not have Bluetooth built in. This also allows the headphones to maintain simultaneous connections with a smartphone and a USB device. You can connect to two Bluetooth devices simultaneously, with or without the dongle, including laptops with Bluetooth built in.

When stowed, the microphone of the Epos Adapt 560 sits nearly flush with the headset

A button on the dongle is said to allow quick launching of the Microsoft Teams app, but I couldn't get this to work on my MacBook Air. The headphones directly and automatically connected to the dongle for me without any pairing process. Apart from Microsoft Teams certification, there is also support for the SBC, AAC, and aptX Bluetooth codecs.

The Epos Adapt 560 offers excellent battery life, running for around 34 hours with music playing when connected to a smartphone, on a single charge. With everyday use for around 6-7 hours a day of music, calls, and other audio, I estimate that the headphones will run for around four days on a single charge. Charging is slow though, with the headset taking nearly four hours to charge fully.

The Epos Adapt 560 is great for calls and productivity, not too good for music

Most of the headphones we review are music-focused, and the Epos Adapt 560 is a rare exception, meant for things other than music. With the primary use case for such a headset being calls and voice communications, that's what I concentrated on for this review. I tested the headphones with iOS and Android smartphones, and also used the dongle for connectivity with my MacBook Air laptop. While I was able to use Bluetooth to connect to my laptop, I found that using the dongle made for quicker connectivity.

The Epos Adapt 560 is very good as a hands-free headset, and I had good experiences with both a smartphone and a computer. The sound tuning makes for clear voices, which were easy to hear and understand regardless of whether I used a cellular or fixed home Internet connection. The boom microphone proved to be excellent, ensuring that my voice was picked up accurately and clearly for the person on the other end of the call.

This voice-focused sonic signature also makes the Epos Adapt 560 very good for dialogue-heavy content, such as instructional videos, podcasts, and even many kinds of movies. I found this quite useful as my job often involves watching this kind of content, and having the headset always connected to both my smartphone and laptop made this part of work a lot easier. Furthermore, device switching was almost seamless, and the headset managed to switch the audio signal to the device I wanted to hear from nearly every time in just a couple of seconds.

While the Epos Adapt 560 handles communications capably, the same can't be said of the music listening experience. Interestingly, the aptX Bluetooth codec is supported on this device and I did try it with a compatible Android smartphone to see if this made a significant difference to the music experience, but this wasn't the case. The sonic signature made for a rather plain and ordinary sound that is workable for the occasional track you might want to listen to, but the Adapt 560 certainly isn't meant to be used for a lot of music.

Although excellent for communications, the Epos Adapt 560 is less than ideal for listening to music

Listening to a high-resolution version of Golden Brown by The Stranglers with the aptX Bluetooth codec in use, I found a lack of character in the music, and none of the detail and drive that I'd usually expect from a high-end wireless headset. The instrumentals at the start of the track, which sound beautifully cohesive and detailed on the Sony WH-1000XM4 were much more plain on the Epos Adapt 560.

Given that most wireless headphones are music-focused, Epos has a rather unique product on its hands with the Adapt 560. This is a headset that is unashamedly meant for communications, but isn't as specific in its design and feature set as most business or enterprise audio products. Instead, this is a productivity-centric device that looks, feels, and works like any retail wireless headset. It's excellent for its core purpose of communications, with great connectivity options and battery life that is among the best in its segment.

However, all of this still isn't enough to justify the Rs. 29,999 price tag, in my opinion. The on-ear design, ordinary ANC performance, and lack of flexibility for music makes this a niche product that not a lot of people will truly see the point of. Even those who do might think many times before spending this much money on such a purpose-built product. It might perhaps be more worth considering an all-round headset such as the Sony WH-1000XM4, which offers better value for money and will work reasonably well even for productivity.