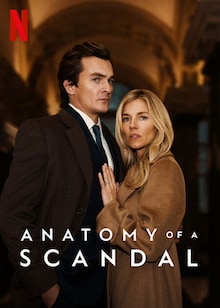 Anatomy of a Scandal

Share
Crime Drama Thriller
2022 Season 1 English
Treading the line between justice and privilege is the British elite, with their scandalous personal and political lives.

About Anatomy of a Scandal Web Series

This anthology drama depicts various scandals amongst the British elite class. It throws light on how the women of Westminster, in particular, are caught in the middle of it all.

David E. Kelley's first Netflix series, it focuses on one story per season. The series is adapted from Sarah Vaughan's novel of the same name, which focuses on a sexual consent scandal within Britain's privileged class that results in the trial of a politician.

Anatomy of a Scandal
Episodes (6)
Rating

Anatomy of a Scandal Photos