Spoilers ahead for WandaVision episode 6. 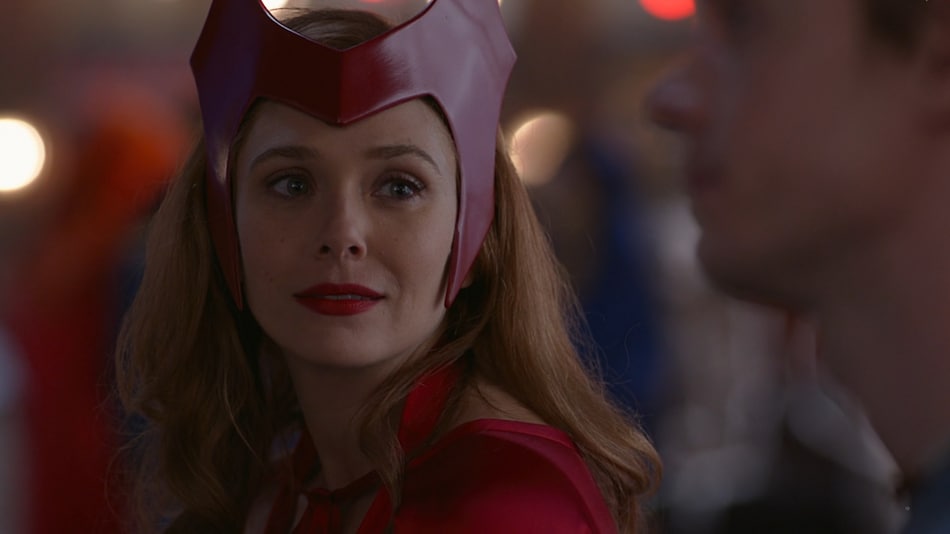 WandaVision episode 6 — out February 12 on Disney+ and Disney+ Hotstar — upped the stakes and the scare. In a Halloween-themed episode that included plenty of Marvel Easter eggs, WandaVision showed the capabilities (and limitations) of its title characters. Vision (Paul Bettany) attempted to leave Westview to get help for those living within, but as he visibly disintegrated in front of us, Wanda Maximoff (Elizabeth Olsen) expanded the town limits itself — which ate up much of the S.W.O.R.D. infrastructure and personnel, including Dr. Darcy Lewis (Kat Dennings), setting up the endgame of the MCU's first Disney+ series. (There's only three episodes left.)

The 10-year-old Billy (Julian Hilliard) becomes a fourth wall-breaking narrator for WandaVision episode 6 — titled “All-New Halloween Spooktacular”, directed by Matt Shakman, and written by Chuck Hayward and Peter Cameron — as he tells us his favourite thing about Halloween while in costume. Tommy (Jett Klyne) doesn't have a costume as he considers himself the “cool twin”. The boys wonder what's up with their uncle, Pietro Maximoff/ Quicksilver (Evan Peters), who gate-crashed WandaVision episode 5 right at the end (and set up a potential multiverse X-Men crossover) and is now sleeping on the living room couch — until four in the afternoon.

They are soon joined by their mother Wanda, who arrives in a decade-appropriate Scarlet Witch costume from the comics. It's an Easter egg designed for the audience, with the twins left wondering who she's supposed to be. Wanda ad-libs that she's a Sokovian fortune teller, which is funny in its own right because Wanda has those abilities as well, having delivered a nightmarish psychic vision for Iron Man back in Avengers: Age of Ultron. Shortly after, the dad Vision turns up in his own decade-appropriate comic-correct costume, and describes himself as a Mexican wrestler that seems to be a sex fantasy for Wanda. Vision then says he has to leave for the neighbourhood watch duty, which upsets Wanda because she didn't know.

Peitro steps in and agrees to be the man who shepherds the twins as “Uncle P”. Wanda notes that he doesn't even have a costume, just like Tommy, prompting Pietro to run to the store at light speed and turn them into both Quicksilver from the Marvel comics — replete with that dual-winged hairstyle. WandaVision episode 6 has plenty of Easter eggs, though it has no interest in explaining what's happening with this universe-crashing casting. Peters played Peter Maximoff/ Quicksilver in the X-Men movies, while Aaron Taylor-Johnson played Pietro Maximoff/ Quicksilver on Age of Ultron. So this is very weird.

Meanwhile outside Westview, S.W.O.R.D. (acting) director Tyler Hayward (Josh Stamberg) is adamant that Wanda must now be treated as a target — one they need to neutralise to restore order. Captain Monica Rambeau (Teynoah Parris) doesn't agree and insists that if Wanda is the problem, then she must also be seen as the solution given the extent of her powers. They cannot afford to go up against her, which in hindsight feels like an explicit foreshadowing for the end of WandaVision episode 6. “You people who left, you still have the luxury of optimism,” Hayward says, to which Rambeau responds: “Don't use the last five years as an excuse for being a coward.”

Still, Hayward is director and in-charge, which means Rambeau is escorted out along with her supporters FBI Agent Jimmy Woo (Randall Park) and Darcy. But they aren't going quietly, obviously. Rambeau and Woo take out the guards who were supposed to escort them out, while the oblivious and untrained Darcy just watches.

Back inside, Wanda is out in the Westview neighbourhood with Pietro leading the kids in tricking everyone around them, with the use of his super-speed. He namechecks Shangri-La when he pauses for a moment, which might be the first hint of Doctor Strange's (Benedict Cumberbatch) involvement on the show. Strange's Nepali base of Kamar-Taj is based on James Hilton's fictional, mystical creation. Or maybe I'm just reading too much into things, at this point.

Wanda then runs into Herb (David Payton) — dressed as Frankenstein's monster — who's also part of the neighbourhood watch, and discovers that Vision is actually not on duty. What is he up to? Vision is studying the people of Westview, it seems, and he's encountered folks who appear to be “bugged out”. They are stuck in what they are doing.

Elsewhere later, Pietro gives us our first clue on what's going on with his presence in Westview (and WandaVision). He was shot in the street and then he heard Wanda call out to him, so he came. He's referencing the moment from Age of Ultron, suggesting that he doesn't remember anything from his universe. Or maybe he's acting? Wanda's twins turn up and Tommy discovers he has super speed, which is fitting, given the costume he's wearing. This also makes sense as Tommy grows up to be Speed in the Marvel comics. Wanda asks Tommy to take his brother Billy along too on his quick adventures, and reminds them to not go past Ellis Avenue.

Back to Vision, intercut with the trio — Rambeau, Woo, and Darcy — who start to realise that the people living on the edge of Westview aren't behaving properly. Does Wanda have like a circle of influence? Maybe her powers don't have the same effect as you get to the town's limits. Or maybe it's the other way around? Maybe Wanda's influence grows stronger as you get to Westview's boundaries, in order to prevent you from leaving?

There's evidence of the latter as Vision runs into Agnes (Kathryn Hahn), sitting motionless in her car. Vision does his thing with his fingers on Agnes' forehead, bringing out the real Agnes, who reveals that Wanda won't even let them think about leaving. She recognises Vision and then wonders if she's dead, given he is. Vision is taken aback as he has no memory of the life he has led. Agnes' use of the word Avenger has no effect on him either. Agnes then starts to panic, prompting Vision to put her back in her repressed state and vowing to help her. Vision walks past Ellis Avenue and towards the energy field's limit.

Meanwhile, Rambeau decides to head back into Westview, despite Darcy's warnings that the energy inside is changing her on a molecular level. Darcy has her own put-foot-down moment as she decides to stay at the base secretly because she needs to get past Hayward's firewalls. She's a hacker on the side too? Who knew.

Inside Westview, Wanda remarks to her brother Pietro about the life she's chosen (as a soccer mom), prompting Pietro to make a remark about how she's managed to do all this. Wanda initially tries to push it away like she doesn't know what he means, but Pietro is insistent. Wanda finally relents, admitting that she doesn't know how she managed to do it. She only “remembers feeling completely alone” and “endless nothingness” inside — she's talking about her state after Avengers: Endgame, the first time she was able to process the death of Vision.

As she turns to Pietro, Wanda sees his chest riddled with bullets and a ghastly face, just for a split second. It's what her brother (played by Aaron Taylor-Johnson) looked like after he died in Age of Ultron. Wanda flinches and then looks at Pietro again, and he looks fine. This is just like that moment from WandaVision episode 4, when Wanda saw Vision as a dead husk like he was after Thanos crushed him in Avengers: Infinity War.

It's still unclear how exactly Wanda brought Vision back to life, but he has his face because she had his body. But Wanda didn't have her brother's body when she thought of him. Is that why her brother has Evan Peters' face instead? Pietro mentioned earlier in the episode that he heard Wanda's call. If that's what really happened, maybe Wanda's call went out into the multiverse, and was responded to by another living Quicksilver — from an alternate dimension.

Elsewhere, Vision has made it to the very edge of Westview, but getting out isn't easy. It takes all his power to push himself through, but it seems Wanda's strengthened barrier is too much even for the likes of Vision. He begins to disintegrate, with pieces of him literally chipping off his body — Westview is pulling him back in literally and killing him in the process. Vision's cries of anguish are heard by his son Billy — he grows up to be Wiccan in the Marvel comics and is capable of telepathy and much more — who runs to his mother Wanda with the news.

In response, Wanda pauses everyone inside and then channels her powers to widen Westview's limits to save Vision. But she goes further and envelops a lot more too, turning everything owned by S.W.O.R.D into a circus: the headquarters become a giant tent, a military truck turns into an ice cream van, and S.W.O.R.D. agents are turned into clowns. Darcy, who was vocal about not going into Westview, is pulled in as well. Rambeau, Woo, and Hayward somehow just escape as Westview's boundaries continue to grow.

Rambeau's words about working with Wanda, and not treating her as an enemy, are worth more than ever. She's really, really powerful but she also doesn't need anything, as she noted in WandaVision episode 5 — so how will they turn things around?

WandaVision episode 6 is now streaming on Disney+ and Disney+ Hotstar. New episodes release every Friday around 1:30pm IST / 12am PT.

Leher App Is an Indian Alternative to Clubhouse: How to Sign Up and Use
Steam Lunar New Year Sale Is Underway With Up to 80 Percent Discount on Games