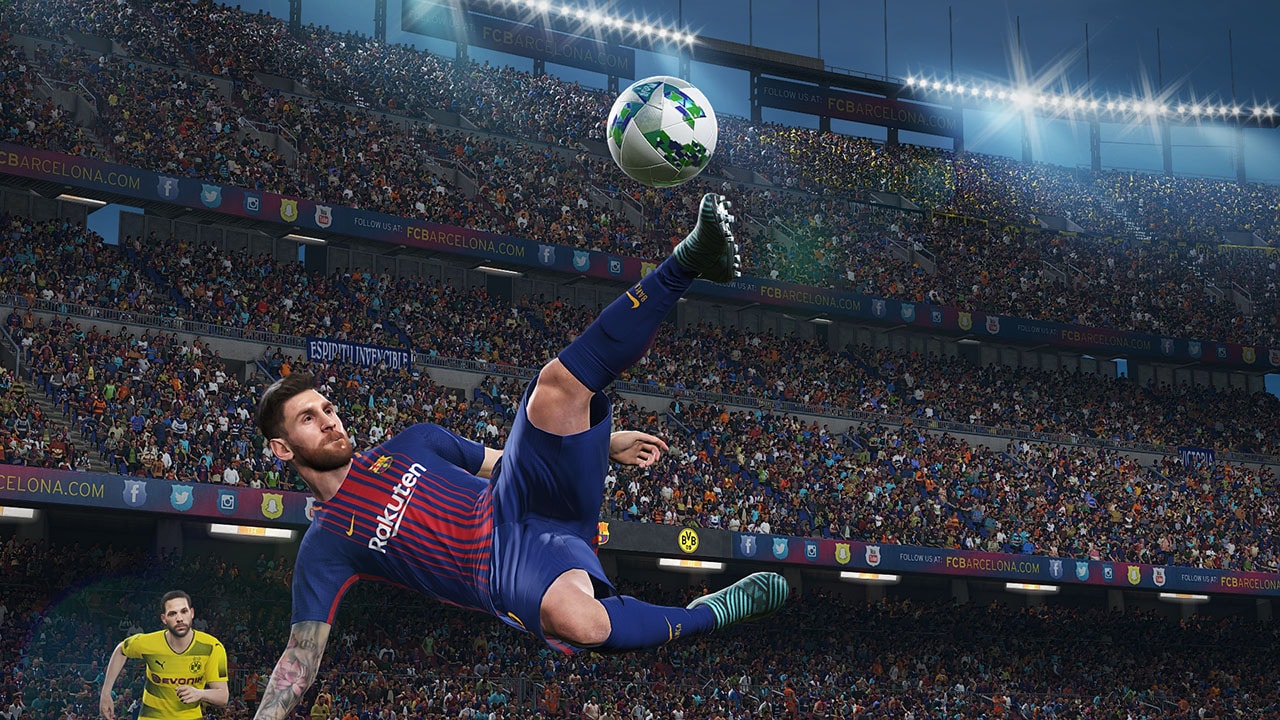 A screenshot of PES 2018 on PC, captured with Nvidia Ansel

Over the last two decades, the two biggest football sim franchises – EA Sports' FIFA, and Konami's Pro Evolution Soccer (PES)– have come ever closer to perfecting the intricacies of the game. But just like football itself, it hasn't always been a straightforward journey. Both titles have seen their share of ups and downs, and have opted for different approaches in getting where they want.

Funnily enough, owing to the decisions made with each successive iteration, both FIFA and PES have ended up where the other was, ten years ago. Just look at PES 6 and FIFA 07, which released in 2006. Back then, EA was more focused on delivering an enjoyable time, and it showed in the impossible crosses and half-line goals that were a regular part of the game. Konami's PES 6, on the other hand, was much more realistic.

Fast forward to today, and it's FIFA that holds the crown of realism. Konami has chosen to embrace the fluidity and the beauty of one-touch football, which makes for a more stylish experience. PES 2018 is another step in that direction, but that doesn't mean it's not interested in realism. There are multiple improvements on that front in 2018, be it dribbling, body movement, opposition awareness, ball physics, and keeper save animations.

PES 2018 is also an important year for the franchise's PC fans, who have felt neglected over the past few years. This time around, Konami has brought the game's PC version in line with the console releases. It delivers fully on that promise, and we've covered that in detail separately. There's Nvidia Ansel support on PC too, which is great news for in-game photographers.

But despite those enhancements, PES is all about high-octane fun, where you can link up terrific long balls and aerial through passes to create wonderful goals, with nary a worry for first-touch accuracy. PES 2018 continues the infallibility of crosses, with balls swerving and dipping in an ideal fashion nine times out of ten. The game is built in such a manner that a high percentage of moves will always lead to goals.

And that's what Konami wants its football sim to be, evidently. While EA Sports has pushed FIFA's tactical realism further each year, which leads to gritty but goalless matches against an AI that is much better at defending than attacking, PES is more than happy to turn into its goals-driven cousin. The AI in PES 2018, much like its predecessors, tilts aggressively towards attacking as directly as possible, launching long aerial balls the moment it wins the ball.

It all contributes in making an exciting and fun game, one that continues to be goal-heavy even as you push the difficulty up the ladder. But there are problems with such a setup too. Given how easily passes can unlock defences, the speed of play (which has been slowed down, but not enough), and the speed of attackers with the ball, it's tough to be tactical when you're defending, with the entire thing coming down to split-second differences.

Moreover, the utopian delivery of crosses, along with a defence that fails at tracking the ball without your help will regularly put you in hapless situations against the computer. For what it's worth, this is also true for the AI defence, so making crossing an integral part of the game is almost a must. That said, PES 2018 does make it slightly better to play the tiki-taka way thanks to gameplay additions, but the game's shielding, blocking, and covering mechanics still need bolstering.

Unlike FIFA, PES still lacks a cover defence mechanic, with defenders still charging towards the ball (and the attacker, in turn) like a homing missile. But since they're always chasing where the ball was a moment before, the charge tends to miss, and let the attackers pass in a schoolboy fashion. It makes you look foolish despite doing as the controls say, and it's frustrating to concede when you know there's a better system out there.

That's not the only aspect PES feels like it's falling behind, though. For what it's worth, Konami used to be first in offering new gameplay mechanics. As an example, PES had advanced shooting options for a few years before FIFA implemented them last year. But it's now falling behind the pace. For one, there's still no driven pass or driven through-ball option (introduced in FIFA 17) in PES 2018, which are very useful tools in keeping possession of the ball.

Even with set-pieces, PES 2018 has been left behind. FIFA's separation of power and height added a whole new dynamic to the way you could construct free-kicks and corners starting last year. PES does have the option to lower and increase lift with the left stick, but it's nowhere near the amount of variation EA now allows for.

New ways to play
One of the biggest additions to PES 2018 is its dedicated co-op mode, which lets you play 2v2 and 3v3 matches in a variety of formats: exhibition, myClub, and PES League. You can have up to two guests on the same machine, which makes it perfect for inviting some friends over the weekend, and duking it out with the computer AI, or finding other people on the Internet.

For what it's worth, the co-op option has been technically around since forever, given you could have two to four controllers on the same team. But with PES 2018's co-op offering, Konami now tracks how each controller (read: player) is performing, and then provides detailed stats at the end of each half. That way, you can figure out who's best at what, and also glean the areas you need to improve in.

Speaking of playing over the Internet, matchmaking was a bit of bother on day one and two. It took a while for us to find a game in Quick Match and Online Co-op, and things were much better on the myClub front. It was much worse for PC players, with a bug not letting players even log in. We tested PES 2018 on PC, and were unable to update squads or create user data until Konami issued a patch early on Friday.

The other big addition this year actually marks the return of a fan-loved feature: Random Selection Match. First introduced all the way back in 2006's PES 6 – also the last time Konami used a number instead of the year – it allowed you to pick four clubs or nations, from which the computer would randomly pick a squad. Now it's back, with some added sheen and polish.

For the most part, it works the same. You choose one team as the 'base', which will serve as the name and logo. Next, you pick four categories that define you team selection, which now extends to club, nation, league, or region. You can also opt to go completely random without any criteria. PES 2018 will then pick a full squad, keeping in mind the formation of the base team.

In addition, you can even a specify one to three trade rounds that allow you to target an opposition player for a switch, while protecting one of your own players. Once that's all figured out, you'll be left at the same match menu where you can tweak game plan, match settings, kit colours, and more.

Beyond that, there are several small improvements to Master League too, including changes to scout behaviour, release fees in transfers, manager objectives, pre-season tournaments, pre-match interviews, and even brief locker room scenes. It essentially brings PES 2018 up to date with FIFA's own manager offering, and nothing more. PES fans will be happy to know that transfer negotiations are much easier.

There's nothing here anywhere on the level of FIFA's The Journey though. PES' single-player career mode, equivalent to FIFA's Be a Pro, doesn't have any visible changes. While EA is placing bigger emphasis with its story mode – Journey with Alex Hunter is a part of the FIFA 18 demo too – Konami doesn't seem to be bothered on that front. Admittedly, the first season of FIFA's Journey wasn't that good, so it's not missing much to be honest. Yet.

Enjoyable, but needs work
The end-to-end gameplay of Pro Evolution Soccer is a double-edged sword. It's the reason it's so exciting to play – goal fests are, by their very nature – but it also contributes into making a game that feels unrealistic at best. And then there's Konami and its licensing troubles, which seems to further deteriorate each year.

It's a well-known fact for PES fans, and something that has inelegant solutions, which is why we don't make much of it. But while PES has gained exclusive access to FC Barcelona's Camp Nou and retains the UEFA Champions League, it's lost important names in Manchester United, Juventus, FC Bayern Munich, and Real Madrid.

Of course, that doesn't take anything away from the gameplay, which will continue to have its fans. PES 2018 does have a few niggles on that end to figure out, or it risks conceding even more ground to its high-selling rival.