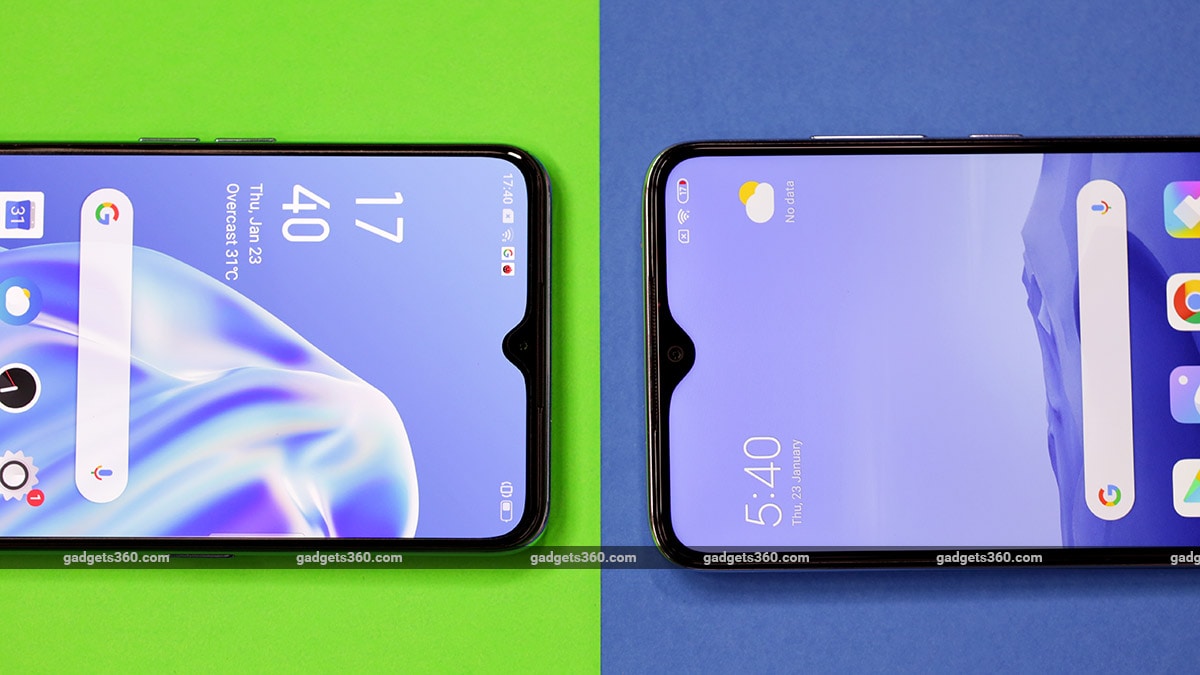 The base variant of the Xiaomi Redmi Note 8 Pro has established its position as a great all-rounder in the sub Rs. 15,000 segment. As you go higher up the variant order, though, you will notice that the higher priced variants face competition from the likes of the Realme X2 and the Redmi K20. The freshly launched Oppo F15 is available in only one configuration for Rs. 19,990 and is also now a competitor to the top-end variant of the Redmi Note 8 Pro, which costs Rs. 17,990 in India. There is a price difference between the two, so should you spend extra for the Oppo F15, or does the Redmi Note 8 Pro have the chops to keep you happy? We compare these two smartphones to find out.

We already know that the Redmi Note 8 Pro (Review) is a well-designed smartphone. It offers Corning Gorilla Glass 5 at the front and the back, which gives it a premium look and feel. However, the Redmi Note 8 Pro is a thick smartphone and it might not appeal to everyone. The Oppo F15 (Review) also has Corning Gorilla Glass 5 at the front but has a laminated back. While this also looks relatively premium, it doesn't feel as nice in the hand. However, the Oppo F15 does have size and weight on its side, as it is thinner and lighter making it easier to use.

The Oppo F15 is lighter than the Redmi Note 8 Pro

These two smartphones are powered by completely different hardware. The Redmi Note 8 Pro sports the MediaTek Helio G90T and is available in three variants. The base variant offers 6GB of RAM and 64GB of storage for Rs. 14,999, while higher variants offer 128GB of storage with 6GB RAM or 8GB RAM, priced at Rs. 15,999 and Rs. 17,999 respectively.

The Oppo F15, on the other hand, is powered by a MediaTek Helio P70 SoC, which we have even seen in other smartphones priced at around the Rs. 10,000 mark. This smartphone is available in one configuration only, with 8GB of RAM and 128GB of storage priced at Rs. 19,999.

Both smartphones sport UFS 2.1 storage and offer the option to expand it using their dedicated microSD card slots. The Oppo F15 packs in an AMOLED display while the Xiaomi Redmi Note 8 Pro has an HDR LCD display. The Oppo F15 runs Colour OS 6.1.2, whereas the Redmi Note 8 Pro runs MIUI 11, but both skins work on top of Android 9 Pie. You can read about these UIs in detail in our full reviews of these respective smartphones. We prefer ColorOS because it is less intrusive in terms of notification spam.

If you have read our review of the Oppo F15, you will know that it does not have the kind of brute power that the Redmi Note 8 Pro does. You won't really notice the difference between the two when it comes to day-to-day use, as both deliver smooth performance without any lag or stutter. However, benchmarks and heavy apps or games will tell a different story.

Both the Oppo F15 and the Redmi Note 8 Pro sport quad-camera setups, but the configurations are different. The Oppo F15 has a 48-megapixel primary sensor with an f/1.7 aperture, an 8-megapixel wide-angle camera that also functions as a macro camera,a 2-megapixel depth sensor, and a 2-megapixel monochrome sensor. At the front, it has a 16-megapixel selfie camera with an f/2.0 aperture.

The Redmi Note 8 Pro sports a 64-megapixel primary sensor with an f/1.79 aperture. The second camera is an 8-megapixel ultra-wide-angle one with an f/2.2 aperture and a 120-degree field of view. Xiaomi has also added a 2-megapixel macro camera, and the fourth one is a 2-megapixel depth sensor. At the front, this phone has a 20-megapixel selfie shooter.

Both phones have simple, straightforward camera apps which are easy to use. We shot the same scenes using the two phones at the same time to gauge their performance. Both phones are quick to lock focus, and their respective AIs were capable of detecting the scenes we were shooting. In daylight, both phones were capable of metering light correctly, but the Redmi Note 8 Pro delivered more accurate results.

For macros, the Oppo F15 uses its wide-angle camera which helps it deliver higher resolution images with better details. The Redmi Note 8 Pro with its 2-megapixel dedicated macro camera is no match for the Oppo F15 here. For portrait shots, both smartphones let you set the level of blur before taking a shot. Both phones manage edge detection quite well, but the Oppo F15 managed colour tones better than the Redmi Note 8 Pro.

Both phones metered light correctly when clicking selfies. With beautification enabled, we noticed that the Oppo F15 was a little more aggressive with the skin smoothening but you can dial it down before taking a shot. The Redmi Note 8 Pro, on the other hand, sharpens images a bit too much. With beautification turned off, it was the Oppo F15 that produced better selfies.

The Oppo F15 was launched recently, and we found it to be overpriced when we reviewed it. At Rs. 19,999 it costs Rs. 2,000 more than the top-end version of the Redmi Note 8 Pro, even though the latter has several features that are more attractive. The MediaTek Helio P70 SoC powering the Oppo F15 cannot keep up with the MediaTek Helio G90T in the Redmi Note 8 Pro. The Oppo F15 is stylish, easy to carry, and offers slightly better battery life. Its macro and selfie camera performance is also better. If you are looking for any of those specific things, you can consider the Oppo F15. However, for most people and most use cases, the Redmi Note 8 Pro is a no-brainer as it offers very good performance and will also save you Rs. 2,000. If you don't need 8GB of RAM, you can even save Rs. 4,000 by going for the middle variant which has 6GB of RAM and the same 128GB of storage.