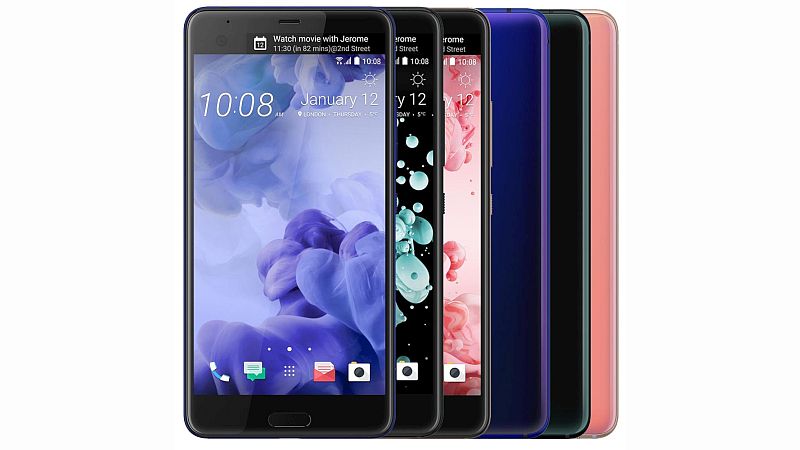 HTC's new U Ultra and U Play smartphones were unveiled last month, but at that point the company had only detailed a March release date. The Taiwanese company has finally announced pricing of the HTC U Ultra and the HTC U Play in the UK market.

Both the phones are now available via the company's official online store as well as third-party retailers. The HTC U Ultra has been priced starting GBP 649 (roughly Rs. 54,000) while the HTC U Play has been priced starting GBP 399 (roughly Rs. 33,000). The Taiwanese company clearly mentions that the HTC U Ultra and HTC U Play start shipping from March 1. Both HTC U Ultra and U Play are also available via third-party online retailers in the UK including Carphone Warehouse, Clove, and Unlocked Mobiles, where in some cases the smartphones are available at lower prices.

The biggest highlight of the new smartphones is the new Sense Companion, which is an AI-based system that learns the user's daily patterns to provide usage recommendations. Some of the other notable features of the smartphones are the HTC USonic earphones, which analyses the shape of the user's inner ears with a "sonar-like pulse"; 16-megapixel front camera with UltraPixel mode, and "liquid surface" curved glass construction. The smartphones will run on Android 7.0 Nougat with the HTC's Sense UI customisation on top. Another highlight of the U Ultra smartphone is the Dual Display, which is a secondary display.

For specifications, the HTC U Ultra features 5.7-inch Super LCD display bears a QHD (1440x2560 pixels) resolution while secondary 2-inch display bears a 1040x160 pixels resolution. It will be made available in two inbuilt storage variants - 64GB and 128GB. It is powered by a 2.15GHz quad-core Qualcomm Snapdragon 821 SoC with 4GB of RAM. The smartphone sports a 12-UltraPixel rear camera and 16-megapixel front camera with an UltraPixel mode. It is backed by a 3000mAh battery with Quick Charge 3.0.

The HTC U Play, on the other hand, features 5.2-inch full-HD display and will be available in 3GB RAM/ 32GB storage and 4GB RAM/ 64GB storage variants. It is powered by an octa-core MediaTek Helio P10 SoC and sports a 16-megapixel rear camera. Much like U Ultra, the U Play also packs a 16-megapixel sensor with an UltraPixel mode. Other specifications include 2500mAh battery.