Huawei Mate 20 Price, Specifications, and More: Everything We Know Ahead of the Launch 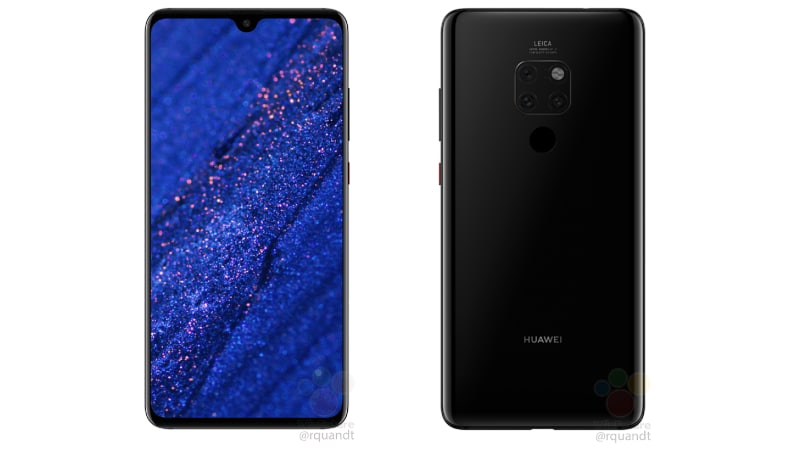 Huawei is all set for its Mate 20 series launch in London on Tuesday, and the Mate 20, Mate 20 Pro, and Mate 20X smartphones are largely expected to go official. The three devices will be powered by the newly announced HiSilicon Kirin 980 SoC, feature triple cameras, and are expected to be priced significantly higher than the Mate 10 series. Leaks surrounding the three devices have been aplenty, and we already know a whole lot about the possible price, specifications, and design details about the Mate 20 series. To recall, the Huawei Mate 20 Lite smartphone has already been launched at IFA in August, and now the Mate 20, Mate 20 Pro, and Mate 20X look set to be announced.

The Huawei Mate 20 series is expected to sport a premium design finish with glass back construction. Past leaks suggest that the Huawei Mate 20 will sport a waterdrop-shaped notch, while the Mate 20 Pro will sport a wide display notch to house additional sensors up front. Both the phones are expected to sport a triple camera setup at the back, and the Mate 20 Pro is expected to sport an in-display fingerprint scanner as well (Mate 20 will sport a rear fingerprint scanner). While the company has confirmed the arrival of the Mate 20X, little has been leaked about its design. We expect the device to look similar to the Pro variant, sport a larger battery, and powerful innards. Mind you, this is pure speculation at this point in time.

Starting with the Huawei Mate 20, it was tipped earlier to sport a 6.43-inch full-HD+ TFT LCD panel with a resolution of 1080x2244 pixels and resulting aspect ratio of 18.7:9. It will be powered by the Kirin 980 SoC, and is expected to pack 4GB of RAM. The smartphone is tipped to sport 128GB storage and be powered by a 4,000mAh battery. This phone will apparently sport a physical rear-mounted fingerprint sensor with face recognition and a 3.5mm headphone jack expected as well.

Huawei Mate 20 Pro is expected to debut alongside the Mate 20X and Mate 20
Photo Credit: WinFuture.de

Next, the Huawei Mate 20 Pro will most likely sport a 6.39-inch QHD+ (1440x3120 pixels) OLED display, front-facing stereo speakers, 6GB RAM and 8GB RAM options, 128GB inbuilt storage, and run EMUI 9.0 on top of Android 9.0 Pie, leaks have indicated. Reports suggest that a 3.5mm headphone jack won't be part of the package and the smartphone will be backed by a 4,200mAh battery, with support for SuperCharge 2.0 that promises 70 percent of battery life with 30 minutes of charge.

The Mate 20 Pro is reported to have an in-display fingerprint sensor, though it is unclear whether it would be an optical sensor or an all-new ultrasonic one. Huawei will apparently also bring its proprietary "Nano Memory Card" format to the Mate 20 Pro that will enable storage expansion up to 256GB. The Nano Memory Card by the company is said to come in the size of a Nano-SIM.

The Mate 20 and Mate 20 Pro are said to have a triple camera setup at the back that could have a 40-megapixel primary sensor along with an f/1.8 aperture and combine four pixels into one to deliver impressive results; 20-megapixel secondary sensor with an f/2.4 aperture; and an 8-megapixel ultra wide-angle sensor. There could also be a 24-megapixel sensor at the front along with a Vertical Surface Emitting Laser (VSEL) module that is rumoured to enable 3D facial recognition similar to Apple's Face ID. The triple camera setup at the back is also rumoured to enable 5x optical zoom and the ability to capture ultra macro shots from an as short distance as 2.5cm.

The Huawei Mate 20 Pro is reported to have high-speed LTE access, NFC, Bluetooth v5.0, and Gigabit WLAN with dual-band support. The handset is also said to come in four colour options, including "Twilight" as well as Black, Blue, and Green.

Specification differences on the Mate 20X haven't been detailed yet in any leak.