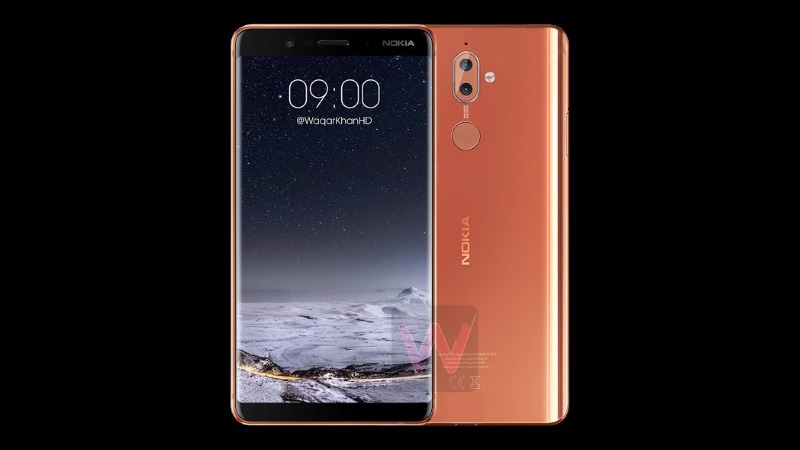 HMD Global's flagship Nokia 9 smartphone was recently spotted on Geekbench and now the smartphone's design has been leaked in renders. In the renders, the Nokia 9 can be seen sporting glass back as well as feature near bezel-less design at the front of the display. Notably, the handset can be seen sporting dual rear cameras in the renders as well.

Talking first about the front of the smartphone, the renders shared by Waqar Khan suggest that the Nokia 9 smartphone will feature a near bezel-less design at the front, which shouldn't come as a surprise as it has become an industry-wide trend this year. The upcoming smartphone can also be seen with 3D glass back design in the leaked renders.

The handset has been tipped to come with dual rear cameras in vertical orientation and fingerprint sensor can be seen right below the camera module in the centre. In the leaked renders, the alleged Nokia 9 smartphone can be seen in Copper Gold colour.

Moving on to the separately leaked render, the alleged image of Nokia 9 have been shared on Chinese website Baidu and suggest similar design to the one that can be seen in the renders shared by Waqar Khan. In the image, the smartphone can be seen right alongside Nokia 2 smartphone, which has not been announced by the company as yet as well. In comparison, Nokia 9 seems to come with a larger frame and feature glass back, which is missing on the Nokia 2.