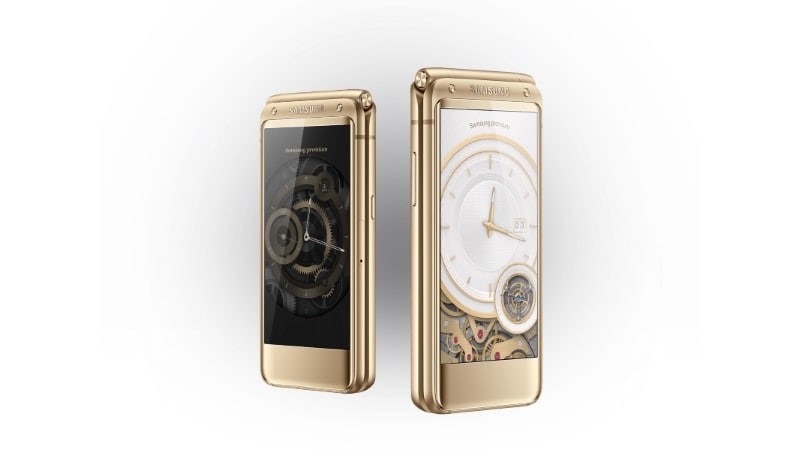 Last year in November, Samsung launched its dual-display Android flip phone W2016 exclusively for China. Given that this category is fairly less populated among smartphones these days, it provided a good option for customers. Almost a year later, the South Korean company has now announced the successor to this phone (no prizes for guessing the name) - the W2017 - that features a dual-display and a fingerprint scanner.

The dual-SIM Samsung W2017 has already been listed on company's Chinese website and just like its predecessor; it is unlikely to be launched outside the country. The smartphone runs on Android 6.0.1 Marshmallow and comes with two 4.2-inch Super AMOLED displays with a full-HD (1080x1920 pixels) screen resolution. It is powered by a quad-core Snapdragon 820 SoC (two cores clocked at 2.1GHz, and two cores clocked 1.6GHz) coupled with 4GB of RAM.

In terms of optics, the smartphone packs a 12-megapixel rear camera with an f/1.7 aperture and flash, with support for 4K video recording, and a 5-megapixel front shooter with an f/1.9 aperture. The Samsung W2017 comes with 64GB of inbuilt storage, which is expandable via microSD card (up to 256GB) in a hybrid dual-SIM configuration. Connectivity options include 4G LTE (with no support for Indian LTE bands), Bluetooth v4.1, Wi-Fi 802.11ac, and a Micro-USB port that also operates as a headphone jack. It houses a 2300mAh battery that's rated to deliver a standby time of up to 64 hours.

The Samsung W2017 measures 127.8x61.4x15.8mm and weighs 208 grams. It comes with an 'always-on' display and has support for fast wireless charging. Sensors on board include a heart rate sensor, accelerometer, barometer, ambient light sensor, proximity sensor, gyroscope, and magnetometer.

Even though the pricing and availability of the smartphone has not been announced by the company as of now, a report by Sammobile suggests that the smartphone might be priced heftily around CNY 20,000 (roughly Rs. 1.97 lakhs). If this turns out to be true, it will be twice as expensive as its predecessor, which already had an expensive price tag of CNY 9,999 (roughly Rs. 98,700).